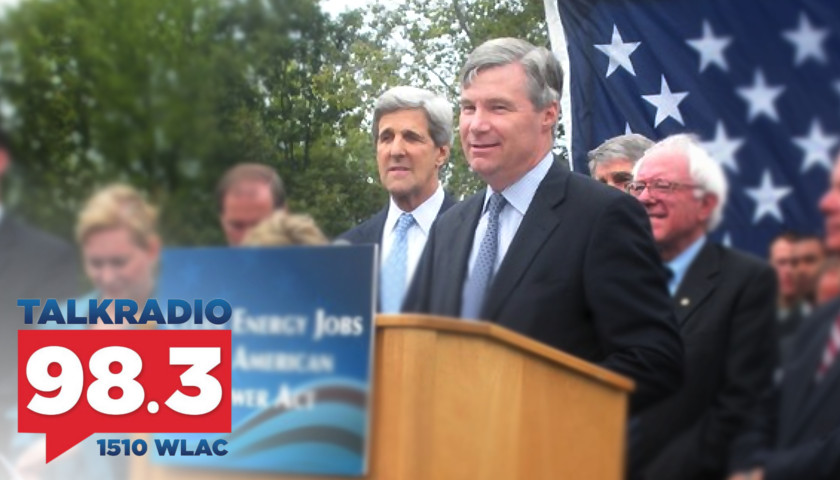 Leahy: Crom, that was 45th President of the United States, Donald Trump. That was the opening line of the rally at the Lorain County Fairgrounds in Wellington, Ohio, Saturday night at 8 pm Eastern. He began with that, and he kept up that theme for an hour and a half.

Carmichael: Well, he could have kept it up for three hours.

Leahy: (Chuckles) You are quite right.

Carmichael: Because when I stop and think about it and I actually have done this, I’ve actually asked myself, is there anything that Biden has done that I think is correct? Has he had one single policy that I think is good?

And I came up with one and then he dashed it. And that is when he came out on Thursday with the Democrat senators and the Republican senators and announced that they had negotiated an infrastructure deal and he didn’t actually say that there wouldn’t be a tax increase to pay for it, because the Republicans said that as part of the deal.

When he did that, I said, well, that’s shocking. I’m surprised that Biden agreed to that. This is completely out of character for him to agree to something that made sense. and then low and behold he holds another press conference two hours later and blows up the deal.

It says, I agree to that deal, but I will only sign that deal if I get everything else I want. What’s the point in negotiating a deal when that deal is contingent upon the other side agreeing to give up everything that that deal made? Biden, unfortunately for the country did not disappoint me by doing something correct.

Leahy: See, this explains to me, I think, Crom why he has brought former Secretary of State John Kerry into the administration to be some kind of global climate advisor because obviously, he’s following in John Kerry’s footsteps.

Carmichael: By the way, there’s a report that Kerry in taking the position sold a bunch of assets, stocks in the energy and fossil fuel industry that have been paying him significant dividends and financial institutions so he could take the position with clean hands.

(Leahy chuckles) That’s like Al Capone turning in all of the guns that he used to shoot people with and saying, I’m now a good guy. (Leahy laughs) Kerry has been making money off of the very companies that he has been complaining about for years.

Leahy: You kind of get the impression Crom, that all of the people in the Biden administration are dishonest supporters and hypocrites and supporters of the collapse. The intention to collapse the American Constitutional Republic

Carmichael: I don’t think they all sit around and say explicitly, what can we do to destroy the Constitution?

Leahy: They don’t say that. That it’s just embedded in their worldview.

Carmichael: It’s embedded in their world view that there should be one party in power and the government should have the final say on everything. And so if you believe those two things, then automatically you find the Constitution to be a very constraining document.

And any institutions that would uphold the Constitution would stop you from doing those things. And that’s the Supreme Court, which gets us to Sheldon Whitehouse.

Leahy: And what did he do?

Carmichael: Well, two things that he did. One is he has been for for a very long time a member of an all-White boating club or some kind of a beach club. But it’s an all-White club.

Leahy: And Rhode Island, by the way, during the Gilded Age, all of the Robber Barons went to the Coast of Rhode Island and built these grave mansions.

Carmichael: Was that the Hamptons?

Leahy: No. The Hamptons is in Long Island. This is Rhode Island. But if you go along the coast, there all of these great mansions from the Gilded Age, there there’s a big a social scene there. looks like Sheldon Whitehouse is right in the middle of it.

Carmichael: Right in the middle of the hoity-toity elitists. And I say this only because he is such a hypocrite. If he didn’t make such a big deal out of the importance of critical race theory and so supportive of Black Lives Matter then his membership in an all-White club wouldn’t bear the newsworthiness. The media is completely uninterested.

Carmichael: Yeah. Well, the family tradition is that he’s a member of an all-White club. (Leahy chuckles) I mean, his whole family is now. But then let’s go to the next thing. And this is why this matters.

Sheldon Whitehouse now has formally sent a letter to the Marshalls office or whatever it is that oversees the Secret Service and the people who guard Supreme Court justices wanting to know the places that the members of the Supreme Court have been for each of the last 10 years. Every location.

Leahy: Why is that his business?

Carmichael: It’s not. It’s supposed to then remain classified. He wants to intimidate the justices.

Carmichael: He’s trying to intimidate the Supreme Court justices. And maybe he’ll be maybe he’ll do it from his all-White club.

These Democrats are vile.