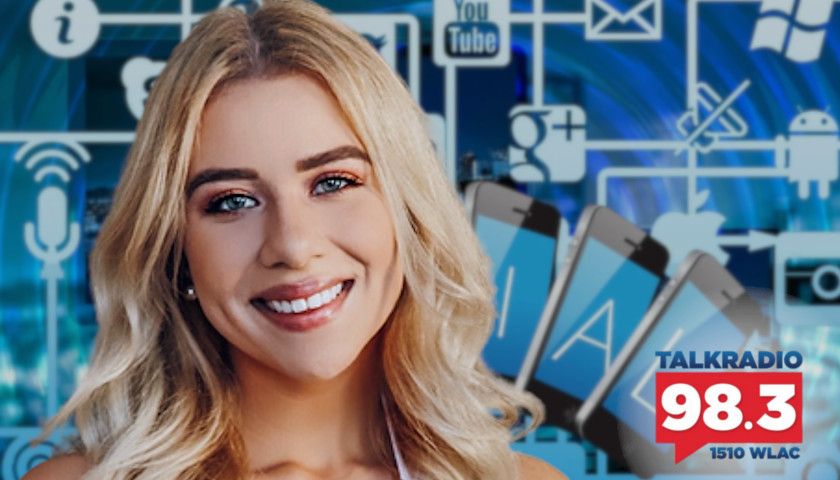 Live from Music Row Tuesday morning on The Tennessee Star Report with Michael Patrick Leahy – broadcast on Nashville’s Talk Radio 98.3 and 1510 WLAC weekdays from 5:00 a.m. to 8:00 a.m. –  host Leahy welcomed Samantha Fillmore who is the state government relations manager at the Heartland Institute to the newsmakers line to discuss the institute’s mission ensuring First Amendment rights are protected from Big Tech censorship through state legislation.

Leahy: We are joined now by Samantha Fillmore. She is the state government relations manager for the Heartland Institute in cold Chicago, Illinois. Welcome to The Tennessee Star Report, Samantha.

Fillmore: Thank you for having me. Good morning.

Leahy: You are a Texan!

Leahy: You attended the University of Texas at Austin. You worked in the Texas legislature. You’re a big UT Longhorn fan and a fan of the Dallas Cowboys.

Fillmore: Yes, sir. That’s pretty much just about everything I’m passionate about. Football and politics, what more is there?

Leahy: What more is there? What kind of adjustment does a woman from Texas make when she moves into cold Chicago to work at the Heartland Institute?

Fillmore: Let me put it this way, my dog and I are not thrilled. And I just discovered that you have to own a shovel to shovel your car out of snow. This is news to me. Otherwise, though, I’m very happy to be here. Chicago is a great city and I love what I do at the Heartland Institute. So, I have no complaints.

Leahy: It is a great city. But it is also much colder than Austin, Texas.

Fillmore: Yes, sir. That is true. But I’m very happy to do what I do. And again, I think anyone who is able to maintain and keep a job in the last year that we had is I should only be grateful. So I’ll handle the snow. I’ll put on my big coat and look like a marshmallow and I’ll keep quiet about it.

Leahy: Where in Texas are you from? What county?

Fillmore: My family’s from Dallas historically. A very deep, Texas family that goes back about six generations. I definitely broke the norm by coming to Chicago. I’ll definitely be going back eventually, but this is just a fun place to be building up my career. But no I did definitely think often that Texas is calling me. (Chuckles)

Leahy: Are you from Highland Park in Dallas or you from Frisco or Plano? What part of Dallas are you from?

Fillmore: Okay, so you’re familiar with the area. My family has a historic home in Arlington. I grew up very close to the stadium and Six Flags. Which I somehow never got tired of growing up.

Leahy: My wife is from Texas near Nacogdoches in Saint Augustine, and we actually met when I was working in Dallas. I managed a retail store not too far from Highland Park at the intersection of Preston Road and Lovers Lane. I’m sure you know where that is.

Fillmore: I know exactly where that is. I can imagine that in my mind. A very smart man ends up with a Texan woman.

Leahy: Well you have a very important job. and tell us a little bit before we get into the government state relations work that you do. tell us about the Heartland Institute in the important work it’s been doing in the area of State sovereignty and states rights.

Fillmore: Absolutely. So the Heartland Institute is about 37 years old. And we are an independent and national nonprofit organization. So we have that 501-C3 status. And our mission is to discover and develop free-market solutions to social and economic problems. Generally, the way that translates is we just don’t like a lot of heavy government oversight regulation.

We think that states should always maintain, have, and push for as much sovereignty as they should. And so we are headquartered in Illinois as you mentioned around the Chicago area. And we just focus on providing local and elected state officials with research to push policy that goes along with our mission.

Leahy: So you wrote a great piece last week. Why Big Tech Censorship is Super Scary. The subtitle says, the rapid innovation of technology and the ways in which it affects our daily lives has baffled those of us who remember the pre-digital and dial-up days.

Leahy: Talk to us a little bit about this alarming and frightening trend of Big Tech domination of individual liberty and what states and individuals should do about it.

Fillmore: Of course. So as we all know overnight basically in the blip of human time we saw this huge emergence of these massive innovations of Internet social media platforms. And there was something really good about that. It elevated this national conversation and political discourse to kind of become the modern-day public square for people to discuss their opinions and listen to thought. And that is still a miraculous thing.

But with that, we have allowed it to become factored into the hand than to a handful of powerful tech titans. And unfortunately, the way that laws are right now, they’re protected from liability and they operate as monopolies which has led to Americans becoming fearful. They see a lot of prominent and especially conservative politicians or people that might not have any viewpoint that falls out of the normal lose their ability to speak. And at what point does that stop? At what point does that just become the trend? And you get into the Orwellian almost dystopian novel of being silenced and unwritten.

Leahy: Some states have been pushing back in North Dakota some legislators proposed legislation that could or would allow the citizens of that state to sue Facebook or Google if they censored them unnecessarily. And that’s been quite controversial. I know your associate there who is the director of government relations Cameron Sholty had submitted testimony before the North Dakota House Judiciary Committee on that legislation. Tell us a little bit about that issue and where you see that going?

Fillmore: Absolutely. So we actually currently now know that there’s somewhere between a dozen and 15 states that have already begun to propose legislation that looks like that. And if not, we are speaking to them and try and help them craft that. So this will definitely be a sweeping legislative trend for the 2021 session.

And that’s important because every state legislature is meeting this year, which is not always the case. so pretty much as I’m sure you know, President Trump signed his executive order on social media censorship in May 2020. And that cracked down the ability of the Communication Decency Act and Section 230 for social media outlets to begin to censor.

Leahy: And if we can stop here just for a moment. You’re talking about Section 230 of the 1996 national law called the Communications Decency which prohibited citizens from suing Facebook and Google and other social media outlets for censoring them. Critics have said what they’re doing is they’re privatizing the government’s ability to violate First Amendment rights. That’s the criticism of it.

Fillmore: Yes sir it is. That is correct. So the way that it’s written and what in the law of Section 230 it absorbs these large platforms from ever having to be liable for material that their users post because they are just simply hosting platforms. However, the more that they censor certain tweets or certain people they turn into an editorial context.

So then the logic is that if you’re that in turn to this editorial contact, you should then be able to be liable for these actions. And the way that states are fighting against that such as North Dakota are is with legislation that would allow that you said private citizens to take private action in court if they feel that they have been silenced unnecessarily.

What is important to note about this is that it does have to be proven through all this legislation that they did not break any of the Good Samaritan laws or rules-based in the industry that goes along with posting. Which I think should be fair. Obviously, anyone outwardly pushing for violence was saying atrocious things which we have seen on social media that that does violate the terms and conditions that you sign up for and some of these platforms.

But if you were saying something simply political or something that has nothing to do with politics until it got taken down and you were still within those agreements then that is actionable to be taken into a court of law.

Leahy: So give us an update on the possibility and likelihood that this legislation in North Dakota will move towards passage in both the House and the Senate and then signature by Governor Doug Burgum.

Fillmore: Well, it is still pretty early in the legislative process however, the committee meetings are going very well. And I am very confident in the ability of the good legislators in North Dakota to see the value in this. And it is a concern for both the Senators and the Representatives that I know in North Dakota but also around the nation. I think this could be sweeping legislation that has lasting effects and can stick in many states and hopefully go across a multitude of Governors’ desks.