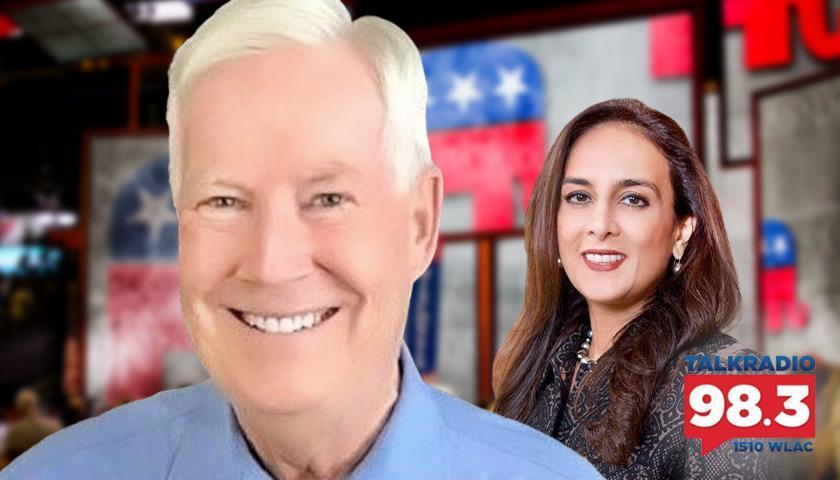 Huey: Harmeet Dhillon May Be ‘A Hero on Fox, but It’s All a Facade’

Live from Music Row, Tuesday morning on The Tennessee Star Report with Michael Patrick Leahy – broadcast on Nashville’s Talk Radio 98.3 and 1510 WLAC weekdays from 5:00 a.m. to 8:00 a.m. – host Leahy welcomed California refugee, Craig Huey, to weigh in on the choices for the new chair of the RNC and why Harmeet Dhillon is not the right one.

Leahy: In studio with us, are very good friend, California refugee, Tennessee resident, marketer extraordinaire entrepreneur, and good friend Craig Huey. Craig, it’s always fun to have you in here because I learn something every time you’re in here.

Huey: Michael, it’s always great to be with you.

Leahy: (Laughs) And by the way, the cheeriness that you hear in Craig Huey’s voice, you’ll always see a smile on his face when he’s in the studio. I don’t think I’ve ever seen you not smile. I’m sure there are times when you don’t smile.

Leahy: But mostly you’re smiling, which is good. We need smiling these days. You’re from California.

Leahy: Next week there will be an election for the new Republican Financial Committee chairman. We’ve got three options. None of them are good, in my view. Ronna McDaniel, who’s failed three consecutive times, Harmeet Dhillon, who is an attorney with a few asterisks associated with her, and then Mike Lindell, who makes pillows and is involved in a huge lawsuit.

Leahy: And we will actually get others to come in and talk about Ronna. But you know Harmeet very well.

Leahy: Because you were in California with her.

Leahy: You’ve got a piece coming out.

Leahy: And you’re going to weigh in on this?

Huey: I am. And, you know, here’s the thing. This is a very important job and I don’t see somebody actually running for this job with, in Republican National Committee, the RNC, that’s capable of turning things around. And we have a presidential election two years away!

What happens with the RNC can make or break it. I want to remind you, Michael, that they have failed year after year in the election, to get out the vote, failed to keep up with the technology, and failed to do the damage.

Leahy: On the get-out-the-vote, they haven’t even identified or understood the problem. The problem is in those states where it’s legal to early vote, early vote folks,  they didn’t recognize that. And that’s right on Ronna’s doorstep.

Leahy: The other problem with Ronn McDaniel is she’s surrounded by grifters.

Leahy: The biggest budget grifters in the United States of America are consultants of the Republican National.

Huey: It’s so sad. They’re totally ineffective. Donald Trump, when he won in 2016, he did it outside of the RNC without even looking at them.

Leahy: We’ve got a piece at The Tennessee Star, come by a friend, Mark Meckler, the co-founder of the Tea Party movement, now the head of the Convention of States. Basically, he says voters can no longer tolerate business as usual. It’s time for Ronn McDaniel to go.

I won’t disagree with it. However, you know, Harmeet Dhillon, the other leading candidate. What do you have to say about Harmeet? Do you recommend her?

Huey: Harmeet is somebody who’s very nice. But let me just tell you. I have been involved in the California Republican Party for about 25, 30 years.

Huey: All we had to do is change about 1200 votes. But here’s the thing, Michael. Through this time, when she moved up into leadership in California, I have seen her fight the conservatives, she has fought change. She has not embraced early voting, she has not embraced ballot harvesting…

Leahy: Whoa, whoa, what? Now wait just a minute. Everything I read from Harmeet Dhillon is she’s now talking about early voting.

Huey: She is. So here’s the thing. She has failed to implement it at all or even be vocal about it in California. Instead, she’s positioned herself with great PR. She’s on Fox all the time.

Huey: She’s become a hero on Fox, but it’s all facade.

Leahy: Hold on. This is what Craig Huey’s saying about Harmeet Dhillon.

Huey: I’m telling you the truth because I’ve seen her in action. And the fact is, she’s making millions by positioning herself as a religious and civil rights attorney.

Her law firm is making millions taking on case after case after case, and she’s got a great business model, she’s got great PR, and this is only propelling her even higher. And the fact is, she is saying some of the right things, but she has no track record, plus she doesn’t know how to implement it.

Leahy: To use a Texas phrase to describe a California attorney, would it be fair to say, when it comes to early voting and political operations, she’s all hat and no cattle? (Laughter)

Leahy: If you’re out there and you support Harmeet Dhillon, we’re happy to talk about it. They’re going to select they’re going to go out to Dana Point, California, I think next week.

Huey: Beautiful. Right on the ocean.

Leahy: Ronna, she keeps making mistakes. There’s a challenge. Our radio partner in Virginia, Georgia, and Pennsylvania is John Fredericks, who also has a program on Real America’s Voice where Steve Bannon has his WarRoom.

Both Real America’s Voice and John Fredericks are hosting a public debate. Harmeet has accepted and Michael Lindell has accepted. Ronna McDaniel has not accepted. I think that’s a mistake on her part.

Huey: A total mistake. But you know what? She feels she’s got it. She feels that she’s too vulnerable if there is a debate. So I can kind of understand her backing out. It looks bad, but I’m not sure what’s going to affect the problem if the Republican National Committee is controlled by Republican consultants.

Leahy: All they’re doing is TV ads and taking 15 percent or 10 percent off the top. Who cares.

Leahy: So just to summarize, you don’t think Harmeet Dhillon is the right person to run the Republican National Committee?

Huey: And I know she’s failed.

Leahy: And Mike Lindell is a good guy making pillows.

Leahy: But those are the only options out there.

Huey: Unless somebody comes forward.

Leahy: Are you going to volunteer?

Huey: I don’t think they would even listen to me. (Laughter)

Leahy: It’s those three. When we talk 2024, don’t pin your hopes on the Republican National Committee.

Huey: Not only Trump, but that’s what Obama did, too. He did it outside the political class.

Leahy: Craig, we’ve identified the problem. We haven’t solved it.