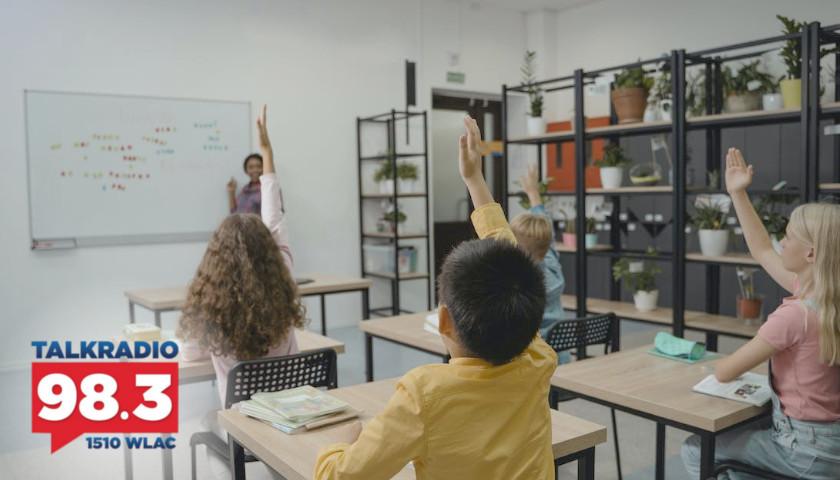 Live from Music Row, Friday morning on The Tennessee Star Report with Michael Patrick Leahy – broadcast on Nashville’s Talk Radio 98.3 and 1510 WLAC weekdays from 5:00 a.m. to 8:00 a.m. – host Leahy welcomed Moms for Liberty’s Robin Steenman to the newsmaker line to talk about their upcoming parent informational meeting Monday evening that will address the dangers of social emotional learning in K-5 schools.

Leahy: We are joined on our newsmaker line now by our very good` friend Robin Steenman with Moms for Liberty, Williamson County. Robin, you’ve got an event coming up to teach parents about Woke curriculum. Tell us about that.

Steenman: The event is SEL 101, Standing for Social Emotional Learning. And it’s really the facilitator of every ideology in our school. So parents need to know about it, and it’s really ambiguous and hard to define by design.

So we’re just trying to take the mystery out of it and equip parents with the information that they need in order to advocate for their students.

Steenman: Everything’s just wrapped in a candy-coated cell these days. Is it gender-affirming care?

Steenman: Exactly. And so social emotional learning is really a nice sounding term for the Trojan horse in our schools. In fact, it’s been described as the railroad tracks upon which every ideology, including Critical Race Theory and gender ideology and critical queer theory, and critical feminist theory and all of the theories are brought into our school.

So that’s why we’ve got the 2022-2023 school year for parents in which we’re really trying to take the overwhelming breadth of issues that parents face and break it down just one by one, one month at a time.

And we picked SEL first for the first real event that we’re putting on this year because it’s just so important. It really does facilitate all the others.

Leahy: When and where will SEL 101 be held and how do parents sign up for it?

Steenman: They can visit our website to get information and tickets. The tickets are $10. We are just trying to help cover our costs on this one. We are a nonprofit and the location is Generations Church in downtown Franklin at 408 Church Street and pretty easy to find and pretty central to Williamson County.

Leahy: Momsforlibertywc.org. And now what day and time is this being held?

Leahy: How long is it?

Leahy: Okay, so you can fit this into your schedule, right?

Steenman: First of all, they’ll be able to identify it and define it because one parent describes SEL as trying to nail Jello to a wall, it’s difficult by design. And there’s a psychological agenda for your kids. The teachers are acting in a psychological capacity, focusing on emotions. It’s even hard to describe over the radio.

But let me put it this way in really concrete terms. In 2021, our chapter got a lot of scrutiny and spotlight for breaking the story on our dark age inappropriate elementary curriculum called Wit and Wisdom, and we filed a state complaint about it under the antitrust law. Our parents initiated a deep dive into that curriculum.

They spent over 1200 hours surveying and reading every single book and doing a book report on it. And we did that looking for Critical Race Theory, because in 2021, that’s all we need to look for. And what we found was the end to end social emotional learning, facilitating pockets of Critical Race Theory and gender ideology and anti-Americanism and critical feminine theory.

And we didn’t expect that. So that was really our first real practical look at social emotional learning. And in this elementary curriculum, what is it? Well, it’s teachers focusing on emotions more than reading and writing. And this is an English and language arts curriculum.

So the teachers are constantly asking, well, how do you feel? How does the story make you feel? This is how the story makes me feel. And these stories are not uplifting. They’re so dark and negative and graphic.

We’re talking about graphic death and dark imagery and torture and rape and scalping and skinning and murder of women and children. And it just goes on and on and on. And you’re bombarding K through fifth graders daily with this stuff, and it’s designed to turn these kids into emotional beings.

It’s not at all. It flies under the banner of over helping kids deal with their emotions. No, it’s absolutely stirring up a child’s emotions and turning them into emotional beings, because the ideologies that are controlling this or rolling this in are not about objective truth they’re about subjective truth, which is largely emotions. Emotion, emotion, emotion.

And that’s the dangers of social emotional learning. When you start a kid in kindergarten, by the time they graduate high school, you have a being that is slave to their emotions and not logic and reasoning and objective truth.

Leahy: I can tell you this, when I was a kid back in the 1960s and attended elementary school at St. John’s Roman Catholic Church School in St. John’s Academy in Plattsburg, New York, the nuns did not ask me once how I felt about anything. (Laughter)

Steenman: And you turned out all right.

Leahy: Some people would say I turned out all right. But what’s interesting is I think I like the use of your phrase nailing jello to the wall. The social emotional learning is a stalking horse or a Trojan horse for all of these very negative, dark concepts that are designed, I think, to make elementary school kids depressed and anti-American.

That’s what it looks like to me. Does this just happen organically among the educrats? How does this all come about?

But as many of those things have started in that time, it just really morphed into something negative and sinister, especially if they ever use the word transformative. (Inaudible crosstalk)