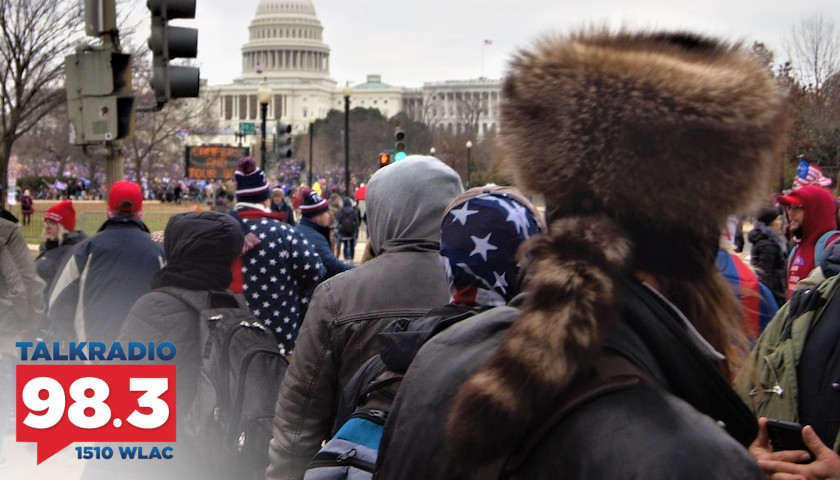 During the second hour, Carmichael analyzed the Sedition Act of 1798 from a historical perspective and compared it to today’s mainstream media attempts to compare situations between Trump supporters and those on the left that are not of equal value.

Leahy: We are joined as we almost always are Monday, Wednesday, and Friday at 6:30 a.m by the original all-star panelist Crom Carmichael. Crom, good morning.

Leahy: Did you have any trouble driving in?

Leahy: Not today. Yeah, so not coming in from Nashville to the studio? Not a lot of snow on the ground?

Carmichael: Not from Green Hills.

Leahy: Green Hills. Well, when I came in earlier today there was some coming up from Spring Hill. Crom, you are a student of history. And one of the reasons we study history is so we try not to repeat the mistakes of the past over the weekend. I was doing a little research on a mistake of the past that it’s rearing its ugly head again. I speak of the Sedition Act of 1798 and I’ll read here from the history of the House of Representatives.

In one of the first tests of freedom of speech, the House passed the Sedition Act in 1798 permitting the deportation, fine, or imprisonment of anyone deemed a threat or publishing ‘false scandalous or malicious writings against the government of the United States.’ This was an era when the newspapers of the day were highly partisan and John Adams was President. He was part of the now-defunct Federalist Party.

Thomas Jefferson and James Madison were developing what was then called the Democrat-Republican Party. Which is the Democrat Party of today. So they passed this law that says you can’t criticize the president. And it was very unpopular. And ultimately that particular law had a life span that ended and when Thomas Jefferson was elected president in the 1800s when the Democratic-Republican Congress let that law expire. But here we are, gosh 220 years later and that issue seems to be coming up again.

Leahy: We call that today the Republican Party.

Carmichael: Because at some point between 1800 and Lincoln’s ascendancy to the presidency, the party of Jefferson dropped the word Republican. They had to have otherwise Lincoln couldn’t have been the founder of the Republican Party. But what is going on now I guess because I wasn’t alive then is very similar. But the Federalist Party at that time is from the Republican Party.

It says from the noted historian Gordon Wood who says the Federalist Party never thought that they were a party. They thought they were the government. And so any opposition to the government was then naturally considered to be seditious. And so that to me is the tie-in today. But here’s what’s going on now in the country.

You have you had that law of 1798 which didn’t last long and the public hated it. But now you’re seeing for example you’re seeing the left, and this isn’t just the politicians but it does include the politicians. Margaret Sullivan a Washington Post media columnist wrote this week, ‘corporations that advertise on Fox News should walk away declaring that the outlet’s role in the 400,000 U.S. lives lost to the pandemic and its disastrous attack on January sixth has been deadly.’

And so therefore the competition of Fox News is literally trying to cancel Fox News calling on the advertisers to stop advertising. But they go further. Nicholas Kristof of The New York Times calls on cable providers to drop Fox News from their cable channels. First of all, I would imagine that there are contractual relationships between Fox News and the cable companies.

Leahy: Right. Which they come up periodically for renewal.

Carmichael: Yes, but I would imagine that dropping them might create some problems. But I don’t want to go there. I mean that would be like a professional sports team saying that the first-team all-pro quarterback for the other team can’t play in a particular game.

Leahy: Because he’s a bad person.

Carmichael: For whatever reason, they just disagree with him and think his play-calling is just inappropriate for the game. And then a former Facebook executive. So these aren’t small people. These aren’t no-name people. A former Facebook executive was more straightforward on CNN. We have to turn down the capability of these conservative influencers to reach these huge audiences. And so what they want to do is make it impossible for the opposition to essentially turn the United States government into a version of the Communist Party of China.

Leahy: Exactly. And by the way, the keyword there and these guys on the left Crom they use language very specifically. And there are themes that come back. The operative word in that quote was ‘reach.’ We had a guest on here Dan Gainor from the Media Research Center at 5:30 am and he said the word of the day coming down from all the folks on the left is this. Freedom of speech does not mean freedom of reach.

Carmichael: And here’s the thing about The Wall Street Journal that and some of these other outlets just absolutely frosts me.

Leahy: Hold it. Hold it. The Wall Street Journal frosts you?

Carmichael: Their editorial page is mostly good. Their news section is mostly bad when it comes to their political section.

Leahy: I agree with that. I stand corrected. That’s exactly right.

Carmichael: Yeah, their business section is straight business. Economics is unless they get into a political area then they’re not very good on their political area. But this is in the opinion section. Here’s the last paragraph. The problems of polarization lies and political violence are real on both sides. Now, that’s where The Wall Street Journal loses me.

Because I’d like to have examples where it is where the so-called right did something that was exclusive to the right and they have the evidence that that’s all it was because I don’t believe it. Do I believe that there were some Trump supporters that there were in the Capitol? Yes. Do I believe that there were some Antifa and Black Lives Matter instigators who helped fan the fires? Absolutely yes. But to compare that one instance and even to make that a huge incident compared to all of the other things that happened this summer and say that they are equally bad, that’s where we get into trouble.

Leahy: Let me just add, I don’t disagree with you at all however, Crom what you’ve just described as being not an honest description of the comparing the two sides is not what we’re seeing at all.

Carmichael: I know that. I’m saying that here. The Wall Street Journal has a whole article that is attacking the left for trying to literally shut down the ability of frankly, of your show to reach its audience. The whole article is about that. And it’s not just one person. It’s across their whole spectrum. And then in the very last paragraph, it provides equal responsibility, which essentially gives credence to the entire argument.

Leahy: A very fine point. And I agree with it completely.

Carmichael: Now this is in The Wall Street Journal‘s political section. They ran a very long article almost seven printed pages. When you do the printing that’s a long article, most are two, but a short article where they are identifying the people who funded Trump’s rally. Trump’s rally. And they’re trying to tie the rally itself into breaking into the Capitol. And I want to talk a little bit more about that.

Leahy: That is a very good point.