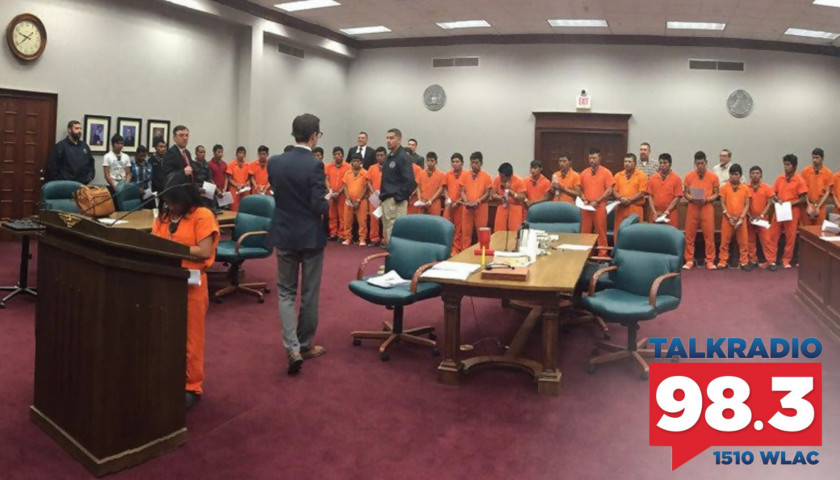 Leahy: That’s Congressman Andy Biggs from Arizona talking about the Biden mal-administration’s failure to enforce our immigration laws. What’s happening at the border is illegal aliens are crossing in record numbers. They’re not being tested for COVID. They’re not being detained. They are being put on buses and planes and sent all around the country, including to places like Tennessee it appears.

In studio with us State Representative Jerry Sexton. Jerry, when you hear Congressman Biggs describe the reality on the border of that, you look here at Tennessee apparently, some of these illegal aliens, many of them not tested for COVID. Many of them carrying COVID are headed to Tennessee. What’s your response to that, Jerry?

Sexton: Well, it’s obvious we have certain values and certain laws and those laws are being skirted with immigration. We are a country of immigrants, and it’s called the melting pot. The problem is we’re not melting anymore. We’re trying to change the values of this country.

Sexton: Yes, that’s exactly right. And when you’ve got immigrants, we could make them a way for people to come legally. But what they’re doing is they’re getting these people to beholden to them as if they’re giving them something. And unfortunately, it’s happening in Tennessee. And we’re not making our politicians pay for their votes and their policies.

It’s time that we, as Tennesseeans, decide whether we’re going to continue to put up with these types of policies, or do we know exactly what the voting record is of our state Senator, of our governor, of any politician? Do we know what their voting record is? We better stop listening to the rhetoric and see what actually they’re doing now.

Leahy: I have not seen any confirmed reports that these illegal aliens have surged across the border and have been placed in Tennessee. I have seen many confirmed reports that illegal aliens at the border are not being detained and are being sent around the country. It would stand a reason that there are 50 States and they’re probably being sent to Tennessee is one of those States.

There was an unconfirmed report down in Chattanooga. I don’t know if you saw that which said that said, apparently an organization called the Baptiste Group, there was a report, unconfirmed, was housing illegal aliens who had just crossed the border. And then there was, I think, a local Chattanooga message from their school board saying, just a reminder that by law, we are required to educate everybody that comes here.

And there’s a Supreme Court ruling on this that illegal alien children must be educated in K12 public schools. And so I don’t know. There have been no confirmed reports, but it would very much surprise me if there aren’t right now today in Tennessee, illegal aliens who have crossed the border illegally since the inauguration of Joe Biden, who are sitting here right now, many of them poised to go to public schools.

Sexton: Let me ask you something. What if every immigrant that came to America said that they had to listen to your program? And I’m in the furniture manufacturing business and these same people had to buy my product? Now, that would be a pretty good boom for us, would it not?

Sexton: So our education system, they get so much money per student. So what we’re doing is we’re filling up the classrooms with money because every head represents so much money for those schools. And it’s time that we tear apart these organizations that are funneling all this money and everything else. We should be teaching our people. We should be giving them an education.

Leahy: You mean on things like the Constitution of America? (Laughs)

Sexton: Oh, my gosh. Isn’t it amazing how we don’t know the Constitution and we don’t teach those things?

Leahy: Well, funny, you bring that up. Have you seen in our book Guide to the Constitution and the Bill of Rights for Secondary School Students? I think maybe this is the first time I’ve shared that with you.

Sexton: I think it is.

Leahy: And I’ll just talk to you a little bit about this. In October, it will be our fifth year of doing the National Constitution Bee here in Tennessee. And it is for students grades eight through 12. They get a copy of this book. And then we do a Constitution Bee like a Spelling Bee or Geography Bee. And we end up with three winners and the first place winner gets a $10,000. educational scholarship, second place, $5,000, and third place $2,500. It’s a lot of fun.

Sexton: What they are teaching them is completely different from the values of America. I was in a public school and I attend some schools occasionally and in one of the classrooms I took some pictures and I’ve tried to take videos of it, but there was on the board they were teaching about Christmas in Mexico, not Christmas in America.

Leahy: Because that’s what young kids in Tennessee need to learn about. Christmas in Mexico.

Sexton: I tell organizations all the time when they talk about these diversity and inclusion programs. First of all, say it should be done away with because I say it’s not real. If I want to bring my Bible and I want to come into your organization, am I welcome? Can I have Bible study? Can I have Sunday school? No, just on the face itself it’s not real. The first book that was approved by Congress, and I’m sorry, they don’t have the year 17 something but it was the Aitken Bible. It was the first Bible printed in America and approved by Congress.

Leahy: I think that was actually like 1784 during the Confederation Congress.

Sexton: I think so. Yes. And we are when I say we, the American Bible Society, is going to put Bibles in every school to be taught. From this historical standpoint, it has all of the documents. I’ve seen the Bible’s already being printed. And we’re excited that we can put those in schools because we do have a policy, a law, state law that says that you can have these.

But as you said, Michael, people are afraid. They’re afraid to stand up for what is our right in America. And until we start standing for those rights that we have and those values like the Second Amendment, like freedom of speech, like the right to keep and bare arms, until we start standing up for those, we’re going to continue to lose them. I, for one, will not bow to the left and their tactics.

Leahy: Yeah, that’s, I think, very important. But I want to follow up with this. Isn’t it the state legislature that plays a critical role in establishing the curriculum?

Sexton: Of course it is.

Leahy: That is taught in K12 public schools?

Sexton: Of course it is. Now let me give a high five to some of my colleagues in the Education Department. I know several of them that are fighting extremely hard to try to get these policies in our schools. Believe me, you’ve got a lot of Tennessee legislators that believe in the values that made this country great. They’re wanting to get those things taught in our school rooms. They’re fighting for it all the time.

We have to push back against these big unions. And I don’t want my Republican friends that don’t understand that every time we give in to these public schools and this leftist idea that they’re taking that money and trying to defeat Republicans and conservative values. Why do we continue to do that? I tell my friends all the time in the legislature that I am a rural representative and the school systems in my area are the largest employers.