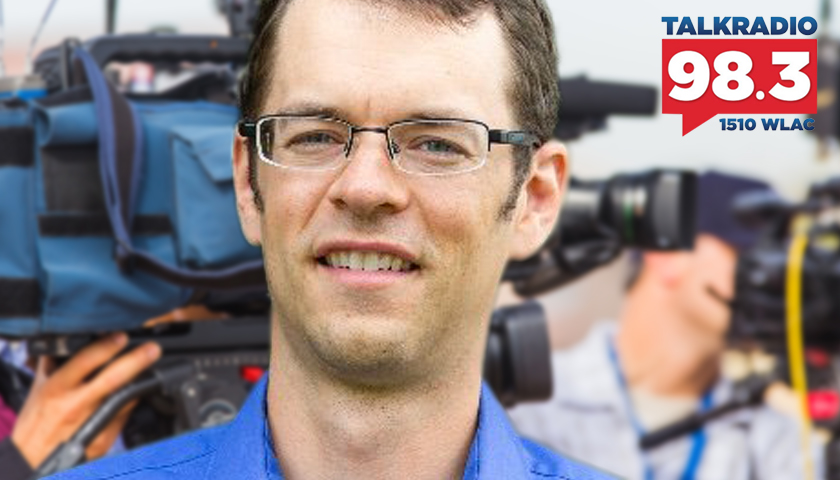 Live from Music Row Monday morning on The Tennessee Star Report with Michael Patrick Leahy – broadcast on Nashville’s Talk Radio 98.3 and 1510 WLAC weekdays from 5:00 a.m. to 8:00 a.m. – host Leahy welcomed Professor Jeffrey Bilbro and author of the new book Reading the Times to talk about his theological perspective on media, how news has changed, fact-checking, and left-wing media.

Leahy: We welcome to our newsmaker line, Professor Jeffrey Bilbro. He’s a professor at Grove City College, A great college in Pennsylvania about an hour from Pittsburgh. He’s the author of a new book, A Literary and Theological Inquiry into the News. Welcome, Professor Bilbro.

Bilbro: Well, thank you for having me on this morning.

Leahy: So you have a Ph.D. from Baylor. Did you take any courses there from Rodney Stark?

Bilbro: I did not, but I do know him and his work. He’s a great guy.

Leahy: He’s a great guy. Written a lot about the origins of Christianity. But your book now, it’s so interesting that you talk about this from a theological and literary perspective. Tell us about Reading the Times and what it means and what it used to mean, and what it means today.

Bilbro: There’s obviously a lot of changes in the news media in the last couple of decades, especially with the rise of social media and the Internet. But I wanted to kind of take a step back and think about the longer-term trends and shifts in the news over the last decades and centuries.

And one of the things I focus on is shifts in the 19th century with the rise of the steam-powered printing press, the telegraph, and some of these earlier technologies, and then try to use people who responded to those shifts.

And you thought about the news from a theological perspective to try to get some wisdom on how we might engage news wisely in our current situation.

Leahy: What did you learn from that?

Bilbro: A lot of it is the temptations we have today about clickbait or just getting outraged about the latest ephemeral crazy thing that somebody said on the other side. A lot of these problems in which the news can become just a set of distractions rather than a way for us to get wisdom and insight into what’s happening and how we should respond.

These are old problems. Humans are prone to distraction and are prone to getting their priorities out of whack. The solutions themselves might not be necessarily new or technological, but the kinds of virtues that the Church fathers and others have talked about for centuries.

Leahy: It sounds like you’re putting the onus on the reporters of news to report news that is significant to the lives of everybody, but not necessarily the outrage of the day. Did Alexandria Ocasio-Cortez say something stupid again? Yes. (Bilbro laughs) Yes. What was it? Right?

Bilbro: That’s right. Because we don’t need to just have our convictions reaffirmed every day by how terrible people disagree with us. But there are ways that journalists can host a thoughtful, informed conversation about events today and help us discern what’s really going on, and help us sort through what responsibility we might have in these particular circumstances.

Those are important things. So as consumers, I think we can seek out and listen to those places that give us wisdom and insight and not just continually rile us up.

Bilbro: Yes. I think that’s right. And we need to be cognizant of what’s worth attending to. What’s actually going to help us love our neighbors and be good citizens and thoughtful members of our communities and attend to the stories that might help us do that.

Leahy: We own and operate eight state-based news sites. And one is The Tennessee Star right here in Tennessee. But also The Georgia Star News, The Michigan Star. We’re opening up The Pennsylvania Daily Star, by the way, in September.

Leahy: What advice do you have for me?

Bilbro: Oh, man. (Chuckles) You know more about this than I do. I intentionally wrote this book to news consumers because I think the people in the business, it’s tough. You have a lot of financial restrictions and pressures.

You’ve got to make money and find a way to keep people engaged. I think there’s a lot of news institutions that do a good job of fostering community amongst their listeners or readers.

Leahy: Now you have my attention because you said there are a lot. Help me out here. Give me your top two or three examples.

Leahy: Oh yes! World Magazine is fantastic. Marvin Olasky runs that. Or he did.

Bilbro: Yes. He’s near the end of his career. I think he’s done a great job.

Leahy: Does anybody actually read World Magazine, though?

Bilbro: Well, that’s a good question. I think they’re doing okay. But I don’t know. I think finding that balance between getting readers or listeners, but also giving them stuff that will edify and encourage and challenge them.

It’s hard because people – we want to hear what pleases us rather than always what we need to hear.

Bilbro: Yes. That’s frustrating. And that’s part of why there’s a lot of news organizations like The Washington Post and others right now who are touting fact-checking. And if we just get all the right fact-checking …

Bilbro: Yes. Exactly. And that’s why I’m skeptical that fact-checking is a real solution because it all depends on who’s checking the facts.

Leahy: It’s fact spinning when it comes from The Washington Post and The New York Times.

Bilbro: Yes. And whoever is doing the checking. And so I think this kind of deceit and fact-checking isn’t really honest. That’s an endemic problem. It’s not really honest.

Leahy: But in our case, our listeners think the establishment media is utterly dishonest, and polling shows that they’re the only institution with a lower reputation than the media. I think it’s like 17 percent approval is Congress, which is like 12 percent approval.

So it can be really hard for news consumers to know where to trust. And I think we don’t want to reject, I don’t know. It’s hard to just want to just discount all of the mainstream media, because I think some people – some individuals out there – are doing good work, too.

Leahy: Okay. And then now, by the way, that’s a statement made, and I’m not going to press you on this. I would be hard-pressed to come up with the list of those individuals in the establishment media, but kind of continue.

Bilbro: (Chuckles) I could name a few individuals at The Atlantic, say or something like that. But I agree that in general, I turn on NPR, and there are some good stories, but there’s a lot of stories I think aren’t getting the full scoop. And so it’s hard to know.

Leahy: I mean, The Atlantic is propped up by the left-wing billionaire Laurene Powell Jobs.

Bilbro: The money is a real problem, I think. And you see, a lot of these organizations are funded by various billionaire philanthropists because they’re not making money otherwise.

Leahy: Yeah, exactly. Hey, Jeff Bilbro, will you come back? And we wish you the best of luck with your book, Reading the News: A Literary and Theological Inquiry into the News. Thanks for joining us today.

Bilbro: Thanks very much.

Leahy: That’s Jeffrey Bilbro, a Professor at Grove City College in Pennsylvania. I strongly recommend it if you have kids looking for college. Take a look at Grove City, along with a few other colleges.