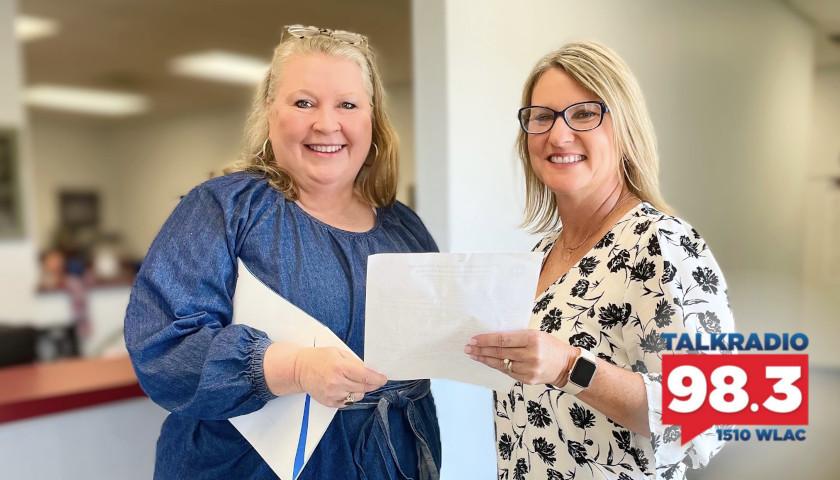 Leahy: In the studio, candidate for mayor of the city of Columbia, Debbie Matthews. Debbie, you’re telling us that Tuesday night you had a debate with the incumbent Chaz-with-a-Z Molder, an attorney, and a left-wing progressive from everything I can tell.

Matthews: You had Mayor Andy Ogles on yesterday who’s running for Congress. So during the pandemic, these two guys who had been elected at the same time, it became the tale of two mayors.

Matthews: During the pandemic.

Leahy: Andy was in favor of keeping everything open.

People traveled from here in Williamson County to do business in Columbia and Maury County during that time. But at the same time, while Andy was trying to keep everything open, Prince Chaz every day would call out on Facebook or the governor, please close us down. Please close us down.

Then he got on CNN, he must have gotten some agent or something. They had him on CNN four times, and he sat there and said, we need a government department that tells us to mask up. And my little community here won’t mask up.

And so after I watched him on CNN – I live four houses up from Chaz – I walked out onto my front stoop, and here he comes by me with his dog, with no mask on. He had just told the nation that he was positive for COVID and to wear a mask.

And then he’s going by me without a mask on. I’m like, going, laws for thee, but not for me. This is what Democrats think. So it’s just insanity. But thank God we had Andy during the pandemic.

Leahy: So he wants to do more of that sort of government control.

Matthews: That was the thing. And now he’s touting downtown. It’s like downtown would have closed. All of those small businesses would have been gone if we had closed. Full stop. That is correct. And so all of those businesses were furious during the pandemic during this time because Mayor Chaz wanted to shut us down.

So anyway, another thing that has happened is Columbia has become a very popular place to move, just like anywhere in Middle Tennessee. But Columbia specifically, because Maury County is now number one in the state for growth, and fourth in the country.

But we have a 40,000-person population. In the last three and a half years through the city, he has approved 200 building permits.

So if there are just two people per house, he’s doubled the size of Columbia in three and a half years, and he does not have any revenue source or plan on how to do this.

At the debate on Tuesday night, it was like we all came and petitioned the state to try to get an impact fee as Williamson County has. Where were you, Chaz? It’s just like you to do this stuff and then push it off onto somebody else to pay for it.

Leahy: So this debate was held at the Ledbetter Auditorium at Columbia State College. What was the evening like? Was there a moderator to the event?

Matthews: The Maury Alliance had someone ask questions, and they called it a forum because then everybody has to stay fairly polite.

Leahy: It was a forum or debate?

Matthews: It was, well, a forum that I turned into a debate because I took advantage to ask Mayor Molder, where were you when the rest of us were trying to get a different revenue source to help all this growth you’ve started to where it doesn’t fall on the backs of our property owners?

We have a 30.57 tax increase that is coming out in the mail next week, and it’s based on this, with no plan for growth, and no other revenue sources other than the property taxes. It’s about to be weary in Maury County.

Leahy: Tell our listeners, what is the Maury Alliance?

Matthews: It’s like your Chamber but they call it Murray Alliance. Columbia gives so much to the yearly funding of the alliance. The county does.

But they did a forum, and they did it for state rep seats with Scott Cepicky and those guys and they did one for the mayor. It was the Maury County Republican Party that truly held debates. But we had a forum.

Leahy: Now, there were a couple of hundred people there.

Matthews: I would say a couple of hundred people.

Leahy: How does the audience react to this?

Matthews: Well, they told them they all had to be completely quiet, so there was not a lot of interaction. But everyone in Maury County is concerned about growth, unfettered growth with no way to pay for it. It’s insanity right now just to have 20,000 building permits.

And right now, we’re five schools behind Maury County in terms of where we are today. We have 13,000 students in Maury County. If all of these permits go through, it’s going to be doubling the inventory school-wise for the county immediately.

Progressives always want to say, what about the poor? They have zero concern truly, on the ground, about what’s going to happen to these folks.

Leahy: I want to ask you a question about how there appears to be a sort of hardcore left-wing progressive crowd developing in various parts of the state of Tennessee. And we saw it, obviously Nashville has always been that way.

You’ve seen Knoxville flip over the past 15 to 20 years. Are you seeing a coterie, shall we say, of hardcore progressives developing even in the city of Columbia?

Matthews: Yes, and they are rabid.