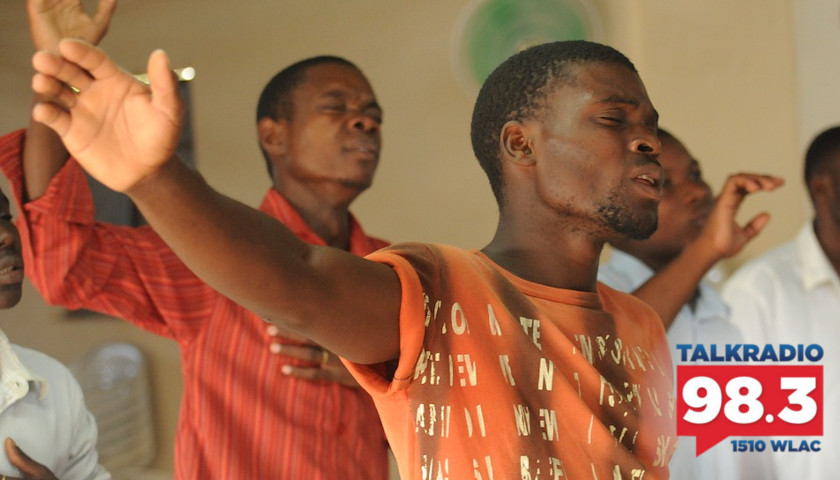 Live from Music Row Friday morning on The Tennessee Star Report with Michael Patrick Leahy – broadcast on Nashville’s Talk Radio 98.3 and 1510 WLAC weekdays from 5:00 a.m. to 8:00 a.m. – host Leahy welcomed the original all-star panelist Crom Carmichael to the studio to question whether or the continued killing of Christian Africans was considered racist or a hate crime by the Biden administration and the lingering issues surrounding the Senate filibuster.

Leahy: Crom we were talking a little bit in the earlier segment about viewpoints of the world that are held by Biden administration members now that are just not reconcilable with views that most of us in America hold today.

Carmichael: That part is accurate. But more importantly, the way that they view it, it’s unfixable. You can’t address it. All you can do is complain about it and then see anyone who disagrees with you as an opposition that needs to be crushed.

Leahy: Well, if they want it to be unfixable because that means they can crush the opposition.

Carmichael: It’s an echo in here.

Leahy: Do I get an Amen? Amen, brother. Amen. (Chuckles)

Carmichael: But here is something that’s an interesting story. This is in The Wall Street Journal headline, Islamic State (this is ISIS) Seeks Revival in Christian Countries. Now, this is in Africa. So a question that should be asked of our new ambassador to Africa Linda Thomas-Greenfield is if a black Muslim kills a Black Christian, is that racist?

Leahy: Or a hate crime?

Carmichael: Or a hate crime? In fact, is it even wrong? That would be a question asked because so far the genocide that is now going on in Africa has been unaddressed by the Biden administration. And ISIS is resurrecting itself in countries in Africa that are dominated by Christians. In the Congo, it’s 95 percent, Christian.

The Congo is almost exclusively Black, but it’s also almost exclusively Christian. And the jihadists are going in killing men, women, and children just because of their religion. Now does the Biden administration think that’s wrong? Does either of the Muslim members of Congress think that Black Muslims killing black Christians is wrong? We don’t know. They don’t say anything about it.

Leahy: Certainly the mainstream media has not reported much at all.

Carmichael: It doesn’t even talk about it. So that’s an interesting thing. So let’s switch over, though, Michael, because as I was getting out of my car, you were talking about court-packing and you made a comment that I want to push back on just a little bit.

Leahy: What Crom? Pushing back on a comment from me?

Leahy: That’s what I said.

Carmichael: Yes. And the difficulty is this, Mitch McConnell is a traditionalist and I’m not saying that’s necessarily wrong. I’m just saying that that’s a fact. So Mitch McConnell believes that to filibuster is a tool that the minority should be able to use in the Senate to thwart legislation that they don’t agree with.

Leahy: It’s been a rule of the Senate since 1806 and that major legislation can’t come to the floor unless basically, 60 senators agree.

Carmichael: Right. So if Schumer, if there are 48 Democrats, I’m just picking a number that is less than 50, it can be 45. It doesn’t matter if Schumer can keep his minority already grouped together, but have it be greater than the number of 40, then they can filibuster. And now they’ve changed the rules of the filibuster so that you don’t actually have to filibuster.

You just have to say we don’t agree with that, and we’re going to filibuster and so, therefore, if you just say it, then the filibuster is in place. McConnell believes that that tradition is good for the Senate. I’m not saying otherwise. When Harry Reid broke that tradition for judges, Mitch McConnell said, if you do that, you’ll rule the day that you did it, because when we get in charge, we will use that rule, which is a simple majority.

And Mitch McConnell, as a traditionalist, says, if you’re changing the rule, I’ll play by the new rule. But what Mitch McConnell has not done, and I’m not trying to find fault with this I’m just making a statement of fact, but like all majority leaders before him for over 200 years have honored the filibuster. And so things can’t get through the Senate unless there are 60 senators. So he can’t play offense because he abides by the Senate rules.

Schumer wants to break the Senate rules which would allow him to play offense and defense. But if he breaks the rule on the filibuster, here’s what Schumer’s great risk is. If they break the filibuster, which I think they have the ability to do with a 50/50 vote and Kamala Harris breaks the tie, Mitch McConnell has said, if you do that, we will not show up. You will not have a quorum.

Leahy: Has he said that?

Carmichael: Yes. He has said that.

Leahy: He must have listened to this program when you said that previously.

Carmichael: Well, I’m not going to try to take credit for that.

Leahy: I’ll let you take it.

Leahy: I will give you credit for it.

Carmichael: I will humbly not take credit for it. (Leahy laughs) But anyway, he said I might have just actually been quoting him, to be honest with you.

Leahy: No, he was listening. (Laughter)

Carmichael: So anyway, he said he said, if you do that, you have to have a quorum. You will not have a quorum. Business in the Senate will grind to an absolute halt. Nothing will happen. If McConnell was to do that after the filibuster is broken and McConnell actually does that and nothing happens, now if Republicans were to retake the House, the Senate, and the presidency, McConnell would play by the new rules. And if they had a majority in the Senate, then things would happen. So the Democrats take a huge risk at 50/50. Now, if they had a 51/49 majority right now they could get away with anything that they wanted to because 51 would be a quorum.

Leahy: Let me give you my view, an insight into how they think. They want power. And they look at the world today. What they have today. And they try to accomplish everything they possibly can today. They’re not looking long-term. They are looking for let’s get it done now. That’s a difference. And it’s a very ruthless approach.

Carmichael: Yes, it’s all those things. But if they do away with the filibuster, and then McConnell plays defense by eliminating the quorum, and nothing happens in the Senate, then the voters will probably react in the midterm.

Leahy: I think you’re right about that.