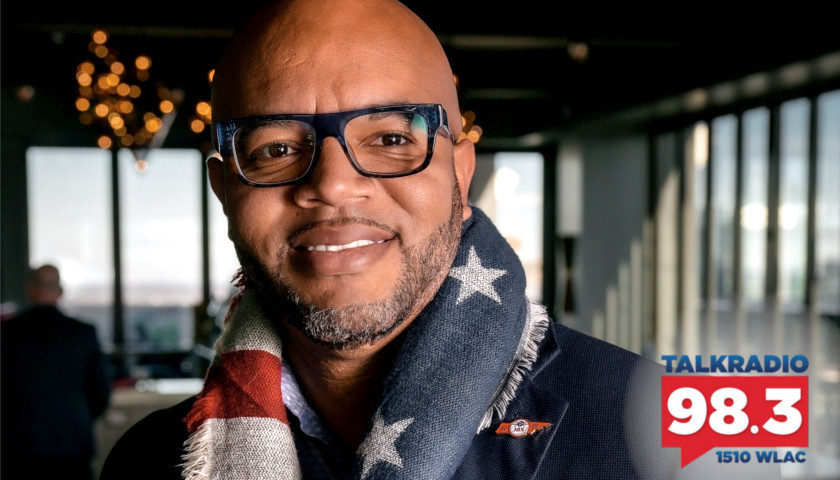 Live from Music Row Wednesday morning on The Tennessee Star Report with Michael Patrick Leahy – broadcast on Nashville’s Talk Radio 98.3 and 1510 WLAC weekdays from 5:00 a.m. to 8:00 a.m. – host Leahy welcomed Republican candidate for Tennessee’s Fifth Congressional District Quincy McKnight to the newsmakers line to talk about why he’s running for Congress, his qualifications, and top priorities if elected.

Leahy: We are joined now on our newsmaker line by Quincy McKnight, who is running for the Republican nomination for Congress in the Fifth Congressional District here in Tennessee. It’s mostly Davidson County on the web at quincyforcongress.com. Good morning, Quincy.

McKnight: Good morning, Michael. How are you?

Leahy: I’m great. Well, tell us about who you are and why you’re running for Congress.

McKnight: So thanks. Well, pretty much. I am Quincy McNight. I am born and raised right here in the good old state of Tennessee. I’ve seen Middle Tennessee grow from a little dot on the map to where it’s at now. And so I am a father. I am a business owner here in town. So it’s just like one of those things, Michael, where you just get sick and tired of being sick and tired and you just kind of get up and do something about it instead of talking about it.

I want to be about the solution. So that’s why I’m running. And plus, on top of that, Michael, I was raised in a Conservative lifestyle and I believe in the Constitution. So with me believing in the Constitution and wanting it carried out, I believe in civil liberties. So to me, it’s natural for me to do this. It’s like I’ve been told by a lot of my constituents and a lot of my friends that the stars are aligned. So it’s my time.

Leahy: So tell us a little bit about your business career, Quincy.

McKnight: Sure. I’ve been in the merchant processing industry for years in the financial services sector for 20 years now. And we own a company here in Brentwood called Covenant Pay Partners. And we process corporations’ payments, and we’re responsible for executing the funds from settlement from A to B within various banks. So I have seen the different avenues of what it takes to run a business and from the failures to the successes of it. So we’ve had wonderful opportunities.

Leahy: So tell us about your path to victory here. I was talking earlier that you’re running for the Republican nomination. First, you got to win that.

Leahy: Whoever wins the Republican nomination, how are they going to win in this Fifth Congressional District, where typically it’s like 65 to 35 for the Democrat. Jim Cooper has been around for a long time. And the closest anybody’s gotten is in 2010 when David Hall lost 57 to 43. What’s the path to victory for a Republican in the Fifth Congressional District here in Davidson County?

That’s how our communities are being affected right now, especially in the core of Tennessee, which is Nashville. And I know the outskirts of the district in Cheatham and Dickson are included in that. But right now to win at this rate, you have to know the people they have to know you especially as Nashville is Democratically led, most have to understand that the Black vote is very important and the Hispanic vote is very important.

And these big issues right now that are affecting both of those communities are, quite frankly, being overlooked. And people are not listening to them. Being born and raised from here and that is the answer to my calling. And I am involved with a lot of these business owners, not just from a day-to-day perspective, but listening to their community needs and their issues and their families. And especially with a lot of the new and undocumented people that are coming into our country. It’s a big conversation that’s going on right now in the minority community.

Leahy: If you were to secure the nomination, and if you were to win in November 2022, and you were sworn in in January of 2023 in the 118th Congress, and let’s say that the Republicans have a majority there, what would be your number one priority as a newly elected member of Congress from the Fifth Congressional District in Tennessee?

McKnight: My number one is to protect the Constitution (Chuckles) at all costs. Period. And we all know what those issues are. Where I’m at right now is I see a lot of our constitutional rights almost kind of being ignored and overlooked. So I have a very strong backbone and I don’t mind saying what needs to be said. And quite frankly, you say what needs to be said because it’s truth. So where I’m at with that is protecting the Constitution at all costs.

Leahy: What legislation would you sponsor as a newly elected member of the House of Representatives, if you were to win in January of 2023 that would protect the Constitution?

McKnight: Sure. Well, number one would be abortion because I am pro-life. People that know me and know my story of where I come from understand that being pro-life is something I’m extremely passionate about just because of what I come from. Protecting those rights of why I am pro-life is what I want to be my first priority because right now in the Black communities, for example, Planned Parenthood is placing these places inside of all minority communities. You don’t see them in other types of communities. I think it’s affecting, especially the Black community here in Nashville wholeheartedly. And those are some of the things I want to start protecting.

Leahy: So what specific legislation then, would be your number one priority to address that issue?

McKnight: Well, we’re going to have to start sitting down with our partners on the other side of that. And we have to start coming up with solutions that can prevent these types of things from happening. I do not agree how some of our legislation has handled things like this in the past, because one of the problems that we, as Republicans have not done a good job of is listening. We do not listen well. And so what I want to do is be able to listen to some of those issues to provide the correct solutions, especially when it comes to pro-life, and listen to the needs of those in the community that have been affected by this.

McKnight: Since December Mike, we have been on our grassroots campaign. We’ve been having forums. We’ve been talking in public. We’ve been in people’s living rooms, which people have opened their doors to, where we can have open conversations so I can understand their concerns in the district here.

I’ll talk with business leaders that are heavily concerned within the district between Cheatham County and Dickson County and right here, as close as downtown on Music Row. So with the business owners opening their doors, we’ve been talking with them every day. Our campaign team is growing at a pace which is almost unheard of just because everybody’s so fired up and they want to see change. And that’s what I am going to be able to offer.