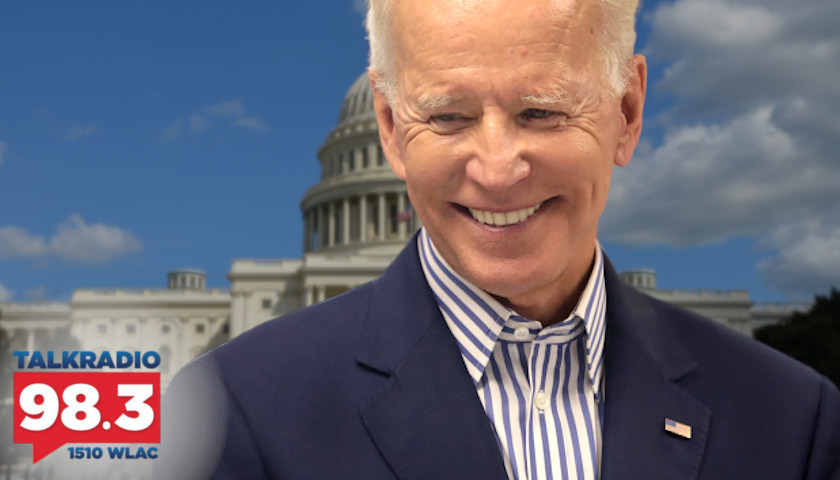 Live from Music Row Friday morning on The Tennessee Star Report with Michael Patrick Leahy – broadcast on Nashville’s Talk Radio 98.3 and 1510 WLAC weekdays from 5:00 a.m. to 8:00 a.m. – host Leahy welcomed the original all-star panelist Crom Carmichael to the studio to weigh in on Biden’s job creation concepts and historically references them to Roosevelt’s make-work programs during the Depression-era.

Leahy: Crom, you’re looking incredulous at me because that is Joe Biden’s job plans for creating jobs for the former oil workers and coworkers by capping oil wells and cleaning up coal mines. That’s how he’s going to make money.

Carmichael: That is actually so reminiscent of Roosevelt and his make-work programs. In the Depression Roosevelt and I think he was wrong, by the way, but I understand the logic. I just don’t agree with it. Roosevelt wanted people to feel like they had a job and that they were working instead of being unemployed. And so one of his programs was public works.

But some of the public works for literally sweeping the parks and sweeping the debris from one side to the other and back again, which, of course, is a complete waste of money. But for Roosevelt, he believed that at least these people had the pride of having a job, even though Roosevelt knew full well that the job produced nothing. And to listen to Biden and the second thing that he said about laying cable, that’s happening every day as it is now.

Carmichael: But if he wants to lay cable to the farthest reaches of the country, then that could be described as similar to the bridge to nowhere.

Carmichael: Because the bridge cabele to nowhere actually did connect two pieces of land over which about maybe three cars a day would drive. (Leahy laughs) So the bridge to nowhere was a colossal waste of money, and I think it actually got shot down. I think it did, but I’m not sure. But we all know people our age that remember that.

Now, this is the cable to nowhere, where it may be a cable to a house or to a group of houses where the cost of connecting each house is $20,000. And that’s the cable when you have WiFi. You don’t need cable. The next thing I’m going to hear him say is, and we’re going to relaunch landlines and all the homes in the country and condominiums and offices that are not connected with landlines. Think of all the work that we can provide. And by the way, every person who is involved in that will be a union member.

Carmichael: And every union member will, of course, pay homage to the Democrat Party by having some of their wages forcibly taken out of their paycheck so that the Democrats can continue to come up with really really dumb ideas.

Leahy: If it’s a dumb idea, you can be sure that Democrats have put their stamp of approval on it.

Carmichael: When you see a politician and you see the word D beside their name, there are actually two words that you could say, dumb and Democrat. (Chuckles)

Leahy: D for dumb. You started on that. And I knew exactly where you were going. (Laughs)

Carmichael: By the way, you need to keep that quote. Keep that one in the library of Michael Patrick Leahy’s great quotes.

Leahy: Great quotes from knuckleheads that run the country.

Carmichael: I have a book that I’m almost done with now it’s a great book, and I’m going to bring it in one day or a few days, actually, and read some quotes from it.

Carmichael: But we were talking about where back then, the media was complaining that Reagan was calling for a tax cut. Wait for it…. a 50 billion tax cut, and Biden wants to spend two-point nine trillion.

Leahy: Well, the spending is out of control. We’re already seeing inflation. Commodity prices are going up. Proctor and Gamble just announced price increases coming. This is inflation that is coming.

Carmichael: Did Proctor and Gamble actually say the tide is turning? (Laughter) Now follow that.

Leahy: You strike again. You are having your coffee this morning. That is pretty good.

Carmichael: So anyway, go ahead.

Leahy: Look, we are headed towards big economic trouble. There’s no question about it. All of this deficit spending on super-duper steroids. It’s leading to inflation. And inflation is never a good thing. He’s trying to resurrect the policies of Jimmy Carter to some extent.

Leahy: Did a couple of things right as he did.

Carmichael: You know how the left likes to talk about QAnon?

Leahy: And people keep coming up to me and lefties say, what do you think about QAnon? And I said I’ve never heard about it.

Carmichael: But I’m having a little fun with this. Okay. Do you know what regulation Jimmy Carter repealed? Regulation Q.

Carmichael: Does QAnon have anything to do with that? Some people have a hard time hearing. What do people say to us to clean out our ears with? Q-Tips. (Laughter)

Leahy: You are on a roll this morning.

Carmichael: And who was James Bond’s technical guy?

Carmichael: My goodness gracious. (Laughter) And what’s that little black and white thing that you hold your phone up to and get a picture of it? What is that called? A QR code?

Carmichael: So Q is everywhere. (Laughter)