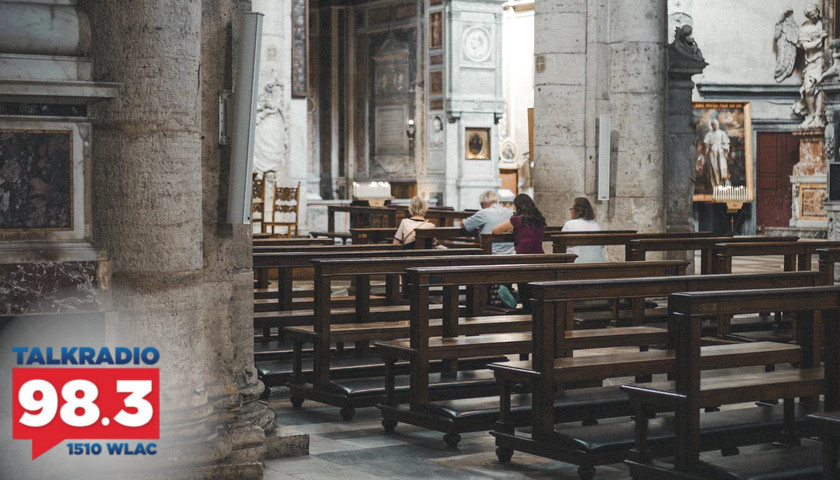 Live from Music Row Thursday morning on The Tennessee Star Report with Michael Patrick Leahy – broadcast on Nashville’s Talk Radio 98.3 and 1510 WLAC weekdays from 5:00 a.m. to 8:00 a.m. –host Leahy welcomed author Lucas Miles to the show to discuss his new book The Christian Left and the progressive far-left Christian movement that continues to drift further.

Leahy: And on the line now by the author of a new book, hot off the press. Was published on Tuesday of this week. His name is Lucas Miles, and the book title, it’s been a book that should have been out there a long time ago is, The Christian Left: How Liberal Thought Has Hijacked the Church. Welcome, Lucas Miles.

Miles: Gentlemen, thanks for having me.

Miles: You wouldn’t believe the number of thank yous I’ve already received. And this is only the first week of release, just people feeling the same way. Like many, I have seen this growing constituency with The New York Times called the Ascendant Liberal Christianity that has been on the rise of believers and oftentimes Bino believers in name only who are embracing Liberal theology, progressive ideology, and at times Marxist theory that is drawing them further and further away from the teachings of Jesus and really more into this sort of socialist sort of amalgamation of Christianity. And it’s concerning. And I wanted to really provide a roadmap for believers and Conservatives, to how they find their way back to Orthodox Christianity.

Leahy: Have you just coined a new phrase, Bino believers in name only?

Leahy: How did you get the deal with them?

Miles: You know, like a lot of things. I mean, it’s the overnight success, 10 years in the making. I’ve known a couple of their team for a few years now.

I was with another publisher on my last book that was actually based in Nashville. And they kind of started courting me over the last few years. And I originally was going to write an entirely different book. And about two years ago, I just saw this sort of on the rise and just really felt impressed that I needed to deal with this topic of progressive Christianity.

I’m in a red state. I’m in Indiana, but a blue county with Mayor Pete Buttigieg. So with our Mayor here, I watched this sort of pseudo-Christianity talk from his campaign for the last few years developing. And I saw this starting to become an issue across the country. And so we started talking about it at Broad Street and made things work. And they’ve just been a tremendous partner on this project.

Leahy: I became aware of this back in 2012, 2013 when a group called the Evangelical Immigration Table that got some funding through various George Soros groups that came and said, well, we need open borders because that is what Jesus Christ would have prayed. Of course, if you look in the Bible, that’s plenty of scriptures that say, no, you have to have sovereign countries. Are you familiar with Jim Wallace at Sojourners? Is he featured in your book?

Miles: Jim gets a mention or two. He’s not a major focus. I didn’t want to name names when I first wrote this and I shared it with a few people I really trust. And they said, Lucas, the book is so needed but you have to be more specific. And I went in and I added another chapter called The Christian Cabal. And I talked about in many ways guys that are just Christian elite, like Wallace and Jonathan Merit and others that have really been behind the scenes pushing Christianity more and more towards these progressive beliefs.

Miles: Russell is mentioned as well. Yes. And I mean other individuals. Beth Moore, I think if somebody that people have a growing concern about is moving further left. And Hey, look, this is not about my brand of Christianity is the perfect doctrine. There is a thing called orthodoxy that it’s a pretty wide pool that we all get to play in. But the moment we start disconnecting ourselves from scripture, disconnecting ourselves from the infallibility of the word God, Christian beliefs have been held for 2,000 years.

And we’re seeing people like Moore and really Beth Moore as well. Matthew Paul Turner, who is the editor, I believe, for CCM magazine for years. A lot of these guys are just drifting further and further left, and it’s really beginning to share a message that is completely antithetical to Christianity.

Leahy: Certainly not Orthodox. What has happened to Beth Moore? She’s been around for 20 or 30 years. She was very popular. She did a lot of women’s Bible studies groups. But she’s gotten off into, I don’t know, it seems to me sort of like and we’ll probably hear from some Beth Moore fans about this and probably try to have her on some time. I don’t think she would come on, but she seems now to have become totally woke in and filled with left-wing ideology, conflating it to the Christian gospel.

Miles: As a Christian, I look at her Twitter feed and about every four or five posts, I go, hey, I can get on board with that. But in between, there is exactly what you described. It’s a lot of woke doctrine, and woke concepts. and she seems to have just become sort of a mouthpiece for left-wing policies and left-wing progressive ideology. And it’s concerning. I’m not somebody who says you can’t be a Democrat and be a Christian.

But I think it’s hard to be a disciple and be a Democrat. I think that things like pro-choice doctrine and LGBT agenda, these things are antithetical to scripture. We have to really be on guard. It’s one thing to be pro-Union or maybe see some policy. And again, the Democratic Party 20 years ago is not the Democratic Party of today. And that’s the thing about progressivism is it keeps progressing further and further and further.

You know, 20 years from now will probably think that a lot of these people seem like moderates compared to the people that are coming down the pipe. But this is why it’s so important that we tether ourselves to something called truth. And I believe as a Christian, the only place to find that is in the word of God.

Leahy: Many of our listeners have been Church attendees for their whole life. I’ve found trying to find a Church where you’re not going to get social justice ideology preached at you, just incessantly has become increasingly difficult. What advice do you have for people that find themselves in that circumstance?

Miles: Absolutely. At the end of this book, The Christian Left,  I provide sort of a roadmap, a list of questions that you can ask of your Church or your pastor or just kind of assess to really see, is my Church starting to drift that way? Things like, does my Church still teach about Salvation? How do they respond to cultural issues such as same-sex attraction and transgenderism?

Do they still stand for pro-life values or have they given over to this pro-choice mindset? What’s their view of immigration. What’s their view of really the sovereign state. These sort of things that the Bible clearly teaches. And I think that it’s important to really check out a Church and listen to the teaching. Don’t just pick a Church for the Kids Ministry or for how cool the band is. It really comes down to what is the message, and we have to ground ourselves in that to make sure that ourselves as well as our children have not really been led astray in this.

Leahy: Lucas Miles, author of The Christian Left, thanks so much for joining us. And come back again, if you would, please.

Miles: Hey, thanks for having me.