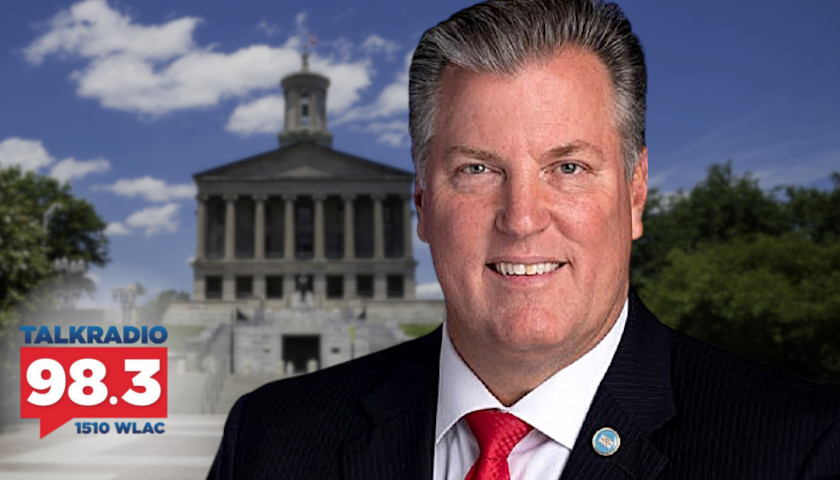 Live from Music Row Thursday morning on The Tennessee Star Report with Michael Patrick Leahy – broadcast on Nashville’s Talk Radio 98.3 and 1510 WLAC weekdays from 5:00 a.m. to 8:00 a.m. –  host Leahy welcomed State Rep. Scott Cepicky in studio to talk about his former life as a professional baseball player and how he came into politics.

Leahy: In studio with us State Representative Scott Cepicky. We’re learning a lot of very interesting things about his career in sports as a professional baseball player. So spring training, what 1980 or something?

Leahy: Spring training 1994. You’re down with the White Sox?

Leahy: And he loves baseball like you do, right?

Cepicky: Well, he does like baseball. He doesn’t love baseball, but he likes it.

Leahy: He likes it. He’s trying it out.

Cepicky: And he made a promise to his father. And I understand that. And when your a White Sox owner and Chicago Bull owner, and winner of three world championships, and you’re the best basketball player, in my opinion, who’s ever lived, you get to do what you want.

Leahy: You get to do what you want. So there he is. He’s playing the right field. So tell us the rest of the story.

Cepicky: We’re just having conversations with him every day, like I’m having a conversation with you, How’s life going? We are just sitting out in the outfield shagging fly balls. And I’m sitting here with Michael Jordan every day in spring training. I ended up getting traded to the Twins. So the Twins optioned me from AAA down to AA. You know, the movie Bull Durham?

Leahy: I sure do.

Cepicky: Well, my role with the Nashville Express was Kevin Coster.

Leahy: So there was a very brief period in time where a AA team called the Nashville Express was moved up to Nashville.

Leahy: Larry Schmittou. Great guy. Former Vanderbilt baseball coach and was involved in the Sounds. And then the Express,.

Cepicky: I believe the Express became the Jackson Generals.

Leahy: I think so. But the Express for two or three years.

Leahy: Okay. So you’re back now playing for the Express AA, the same league as the Birmingham Barons. Where Michael Jordan…

Cepicky: Where I just played a year before winning the southern league championship.

Cepicky: So there’s a time when Michael comes to town.

Leahy: And I went to those games and let me tell you what my initial reaction was. Man, that guy is tall and skinny. That was my first thought, watching Jordan play baseball because you watch him on the basketball court and he looks muscular compared to the other guys. But on a baseball field, he looks very skinny.

Cepicky: Well, there was a picture that was circling for a while back then. He had just walked because he wasn’t going to get a base hit to get on base. But he walked. And I teased him all the time about it. He walked in one day when I was with the Express and I’m standing there at first base. I was playing first place in his game. And I was 6’4, 240 pounds.

Leahy: And you knew Jordan.

Cepicky: And he got down to the first base and he’s standing there, and he’s talking to me. I’m like, I just want to let you know that is the most awful swing I’ve ever seen in my life. And I said if it wasn’t for you being able to shoot the basketball, you’d never be standing here. That made him laugh. And he said, Well, I got to go because I’m gonna steal the second base here. And he did.

Leahy: He was fast.

Cepicky: He was fast. But in the day game that night, we played. And the next day was the Sunday day game on their getaway day. And we played there. And if you ever come to my office and everybody you I always invited to it. It’s not my office.

Cepicky: And so if you come to District 64 is office up in Cordell Hull. You’ll see the newspaper article from The Tennesseean and back then that he signed. And it’s a picture when he first got into town the night before of me and Michael just having a conversation. And so it’s in my office, one of my prize possessions. He was a super good guy.

I finished that year with the Express. Like Bull Durham, they were going to release me at the end of the year. And you know what? As I’ve told your listeners, I’d done everything I could to get to the big leagues. And I called my dad on the phone and I just said, I’m done. I’m going to leave the sport on my terms. I’m not going to hang around forever. I was 28 years old by then.

Leahy: You put six years in. You don’t make the big money in the minors.

Leahy: You make some.

Cepicky: You don’t make a lot of money. And so I just decided I was going to move on with my life. And it was the best thing I ever did. I met my wife. We were living in Atlanta, Georgia, and people said, well, how did you get to Tennessee? I said, well, we had a cattle farm in Southeast Missouri, and I’m a cattleman right now driving back and forth from Atlanta to Southeast Missouri every week.

And it got old. My wife was pregnant. And we’re like, look, we’ve got to either live on a farm or we got to move closer. So we happened to be in Nashville when she said that to me. And I said, well, we both like country music. And so we decided to move to Nashville. And I found my way in a couple of different areas. And finally, in 2008 we moved to Maury County. In 2010 I ran for the County Commission.

Leahy: In 2008 you moved to Maury County. And what do you do there for a living?

Cepicky: I’m a banker. And in 2010, I was sitting there next to my very good friend and neighbor complaining about the situation of our county, our state, and our county. And he said, I’m tired of you complaining about it. Why don’t you fix it. So I put my name on a ballot in 2010. I was elected to the County Commission and served as their chairman for four years. I served as a chairman for two years. And then I ran for County Mayor in 2014 and I lost by 137 votes in the primary.

Leahy: Well known to us.

Cepicky: She asked me if I would be the chairman of the Republican Party. And so I did that for another four or two years. And then in 2018, I got a phone call from Representative Butt saying she’s going to retire. And I said, That’s a shame. I wish you wouldn’t. She said, Well, it’s okay because I want you to run.

Cepicky: So I ran in 2018. The people of Murray County decided that they wanted to send me up to Nashville to fight for them and the people of Tennessee. And I’ve been doing it ever since.

Leahy: But you also owned a beef cattle farm.

Cepicky: My wife and I own a cattle farm in Culleoka, Tennessee.

Leahy: In Culleoka. You have a full-time gig as a banker.

Cepicky: I also do a radio show.

Leahy: Where’s your radio show on? Is it the Columbia station?

Leahy: Good station down there.

Cepicky: Every Friday I give a legislative report. Talk about sports. I used to coach little football. I dabble in high school football and a little bit helping out of Columbia Academy, wherever. A

Leahy: Columbia Academy. The Bulldogs down there.

Cepicky: And just do a lot of stuff.

Leahy: Yeah, you’re a busy guy. So what’s interesting about this is you started off, though, at the county commission politically. Now tell us about that job. To me, it looks like an awful lot of work and a lot of responsibility and not a lot of kudos.

Cepicky: It is the purity of politics at its greatest because you walk amongst your citizens, your electors every day of your life. They have direct access to you. Which I tell people all the time, the federal government can hurt you. The state governments can hurt you a little bit more. But the ones that can really affect your lives are your County Commissions and City Councils. They have direct taxation over you.

Leahy: 22. Now, that’s a lot of people to get something done.

Leahy: So this is interesting, though. The big benefit, and it’s very time-consuming from what I can tell.

Cepicky: You either have to know it or find it.

Leahy: So you represent a district there.

Leahy: So you represent Spring Hill and how often do you meet?

Cepicky: You meet once a month. But you have committee meetings, probably three or 4 times a month. Plus, you have other one on 1 meetings with other commissioners.

Leahy: So it’s a big chunk of time. What’s the biggest thing that you learned from that process?

Cepicky: School boards and county commissions don’t like each other.

Leahy: You said something very important there. Very important. Why do they not like each other?

Cepicky: Well, school boards have the job to run the school systems, and they have to manage their school system. You have to figure out how many teachers you need. What buildings you are going to build. Things you are going to purchase. But the people who hold the purse strings are the county commission. And the county commissioners have to make sure that they run the County in a fiscal way, that it’s going to survive. And sometimes those two ideas don’t mesh.

Leahy: That’s playing out in 95 counties in Tennessee every day.