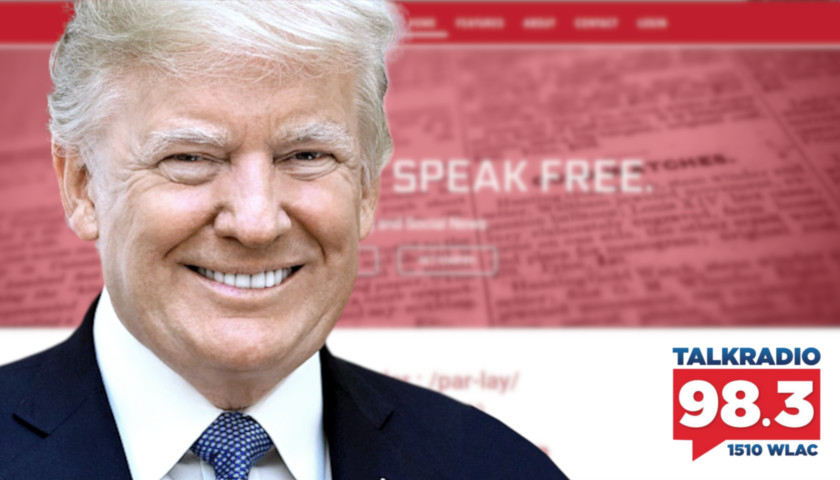 Live from Music Row Monday morning on The Tennessee Star Report with Michael Patrick Leahy – broadcast on Nashville’s Talk Radio 98.3 and 1510 WLAC weekdays from 5:00 a.m. to 8:00 a.m. –  host Leahy welcomed the original all-star panelist Crom Carmichael to the studio who commented on the recent banning of the conservative social media app Parler and explained the importance of equal treatment necessary to maintain a free society.

Leahy: We are joined on Monday here at 6:30 by our good friend the original all-star panelist Crom Carmichael. Good morning, Crom.

Leahy: Well Crom, you and I have been friends for about 30 years. I have a sense that we are in the process of watching a huge change in this country.

Carmichael: I think you’re right. And you know, I want to go back to kind of some first principles that we’ve been with that we’ve talked about for quite a while. There are two in particular. One is equal treatment. Not just under the law but equal treatment as a general principle.

Leahy: Not just the law but let’s say business practices for instance or interacting with other individuals.

Carmichael: Yes. And if people are treated unequally for example, and this is an extreme example, but it’s an accurate example. In the days of slavery, Black people under the law were treated very unequally in the South. And then even after the Civil War was over in the South. The Jim Crow laws and all the other laws that were on the books treated people unequally.

And a free society cannot stand for long when people are treated unequally. And today what you have is you have a government. You have a Big Tech complex. You have colleges, universities, and K12 that are all now treating people very very unequally. And I’m sure you may have discussed it earlier this morning. I heard the last 20 minutes as I drove in that Parler has been shut down.

And it’s an effort by a number of companies that acted in concert and they couldn’t have possibly acted separately and done so in the manner that they did it and it swiftly as they did it. Parler has been essentially removed from the planet. And Amazon. I was getting little messages from Devin Nunes yesterday kind of giving the countdown. I assume that as of now Amazon has shut Parler off of its servers. And I have no idea if Parler still exists. But it was taken out of the Apple Store. It was taken out of Google’s store and so it’s been eliminated.

Carmichael: You may be. But try and make the app work.

Leahy: Let me tell you what it says. But Parler.com right now says this site can’t be reached. I’ll do some research on that.

Carmichael: But again are you are aware of what I’m talking about?

Carmichael: The Parler app was hosted on the Amazon Cloud and Amazon has shut them down. And Google shut them down. But the way Amazon shut him down is particularly interesting because they gave him 24 hours notice on a Saturday. Which meant that they had a Sunday. It was intentional. It was very intentional to do what they did.

Now in addition let’s just go through a few other stories to kind of add too much worse the point. That I’m trying to make here and that ABC News calls for the cleansing. That’s a quote. The cleansing of Trump supporters in the wake of what happened at the Capitol. Now, let’s review very quickly what happened at the Capitol. You had 300,000 people who went there to protest the election results without an investigation.

Leahy: On the mall.

Carmichael: Yes. And it’s as if this was a setup.

Carmichael: To have the House actually invaded. And perhaps and we don’t know this but we have in history had many examples of one side-dressing up like the other side. In fact in our own country the Boston Tea Party. It was a great example of Americans dressing up as Indians or Native Americans. And then they destroyed the chests of tea in Boston Harbor. And then in Germany, they did the same thing. Hitler did the same thing.

Leahy: That was the example I was thinking. What came to mind but not exactly a parallel was the burning of the Reichstag.

Carmichael: There are just not two examples in history. There’s there would be numerous examples. And so and did did did some Trump supporters going to the Capitol? Yes, they did. Did they think it was funny? Probably. Where they wrong? Yes. Okay. However, if you’re a Trump supporter and you look at how the officials reacted to the burning of Minneapolis, Chicago, New York, Seattle, and Portland, and then you looked at how everybody reacted. Including Speaker Pelosi who said people will do what they do.

That was her quote. People will do what they do when they were destroying the federal courthouse in Portland. But I don’t want want to dwell too much on that because there are some other things that are happening. Pelosi calls Trump unhinged and personally talks to the military chief in an attempt to thwart Trump’s power.

Leahy: And that by the way, those actions of her personally talking to the military chief could be considered unconstitutional.

These are political people, have now been arrested by the Chinese Communist Party. The Catholic Church according to The Epoch Times has been infiltrated by globalists. You can put quotes around that. ‘The Chinese Communist Party.’ Let me go back to my point that if people are treated unequally and the Trump people are being treated almost as if they are the 50 people from Hong Kong.

And all of the organizations associated with the Trump people. Parler is it is probably the most prominent example, but I would imagine that what will happen in the next 12 months. And it may happen sooner rather than later, is it there will be language passed in Congress that that essentially stifles talk radio. Because all of the channels that the people who support the ideas of Trump, and that let me make something clear.

Trump was elected in part because of Obama. And Trump probably was re-elected. What’s interesting is Trump was ranked the most admired person in America followed by Michelle Obama. Biden with way down the list. Now you’d think that somebody who’s just won an election by millions of votes would be very high up on the list.

Leahy: Hmm. It’s kind of curious that he’s not.

Carmichael: But Biden is not he’s not admired. He’s not even admired by the people who voted for him. We’re in a very delicate situation. And when I say delicate I see this as a football game where all the referees have been told to throw flags on only one team.