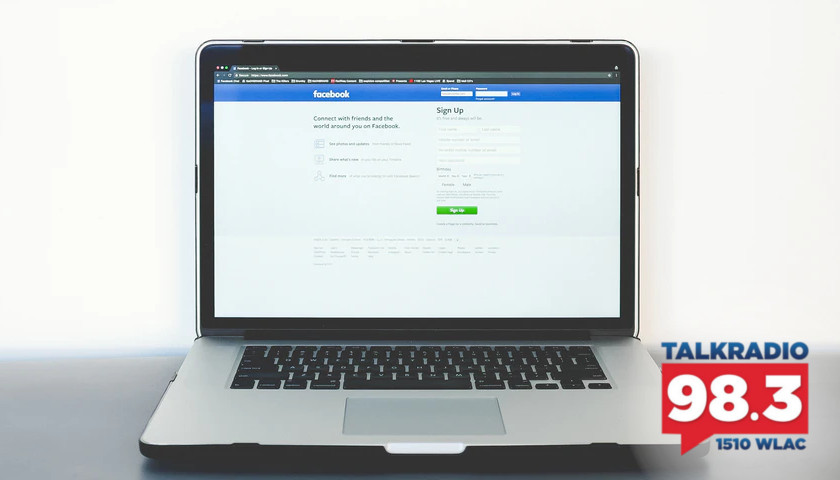 Cunningham: Christina Botteri is across the table. Cristina, thanks so much for joining us. Appreciate it.

Botteri: Great to be here.

Cunningham: Chief Technology Officer of Star Media and Grant Henry with Americans for Prosperity. Grant, thank you so much for joining us, too. Two days in a row here. Thank you.

Henry: I’m available for three if you need it.

Cunningham: I’m actually a little bit more alert this morning than it was yesterday, so I don’t know, maybe I’m acclimating a little bit. I was a little foggy yesterday. We were talking about Facebook and Project Veritas and their disclosures from a Facebook insider that Facebook has been censoring the people who have vaccine hesitancy.

That sounds like a disease itself. And it’s extraordinary the hubris that the corporate leaders have to come out and tell Americans, we’re not going to allow you to say that. That is not allowed speech on the Facebook platform.

This literally is like some morality bureau where they are sitting up there and punching the button and the floor falls out from under you and your chair goes down in a hole. (Botteri laughs)

And nobody knows where you’re gone and you’re never to be heard from again. It’s almost like that, you know? And the arrogance of these people that believe that they can censor our speech. And obviously, there are lots of people concerned about this.

Cunningham: They would not be a publisher, they would be?

Henry: A platform, basically. This all started, obviously, in the tech bubble wave, and we’re in the 90s into the 2000s. And the idea was if we have a website that has a message board or a forum, if you will, you can’t hold the website accountable for any random individual that would jump on there and just post whatever they want to.

Especially if there’s no process by which you vet this information before it gets on there. It’s logical. And to not stifle the growth of the Internet itself, the great frontier of information you have to give them some elite as some allowance, is that you wouldn’t give a normal publisher.

And to be fair, Facebook has always said that we’re not going to be in the game of dictating what is and is not true. We’re just going to let you get out there and have an interaction. But I will say, Ben, whether it’s from Twitter, say, censoring the information of the Hunter Biden story during the election.

Something else to come up and take its place. And I don’t know, I’ll throw it out there to the audience to see. I have my own personal opinions on this, but it is something that Conservatives are left in a little bit of a conundrum to figure out how to deal with. Part of our world uses the free market. The other part says this is a major, obvious, objective problem we have here.

Cunnigham: Christina, what’s your take on that?

Botteri: (Chuckles) Well, you are wrong. People who think, oh, we’ll just wait until something better comes along. And the problem with that is that, as you mentioned, in the early days of the whole tech boom in 1999, I’m old enough to remember 1998, let me tell you something. (Laughter)

Cunningham: Cry me a river.

Botteri: At that time, the Internet was this grand frontier. That’s a wonderful way to put it. And special deals, carve-outs were provided for these new companies, these new endeavors that were going to connect people across the globe.

So Section 230 was sort of one of those special deals. And so companies like Facebook and Google and others, Twitter, and MySpace at the time got these special exemptions. And they grew and they prospered for the most part. (Laughter) They did. They grew.

They prospered. And because they knew what they were doing, and they improved as the technology improved. I’m thinking of Facebook in particular, Twitter, especially, they were able to effectively create a monopoly of instant communications and a freely available communications monopoly on the basis that they were going to be a platform.

And so when they start picking the winners and losers, they very quickly do not become a platform. They are a publisher. I think it’d be really tough for anybody and I’ll go nose to nose with anybody on that one.

Cunningham: And Facebook owns Facebook, of course, huge. They own Instagram. They own WhatsApp. And those are probably three of the biggest social media platforms around. And Microsoft owns LinkedIn. I can tell you that from first-hand knowledge because the Nashville Tea Party was thrown off of LinkedIn with 40,000 followers three weeks before the 2020 election.

The creation of this board where they decided about whether that they should keep Trump off is at least a PR attempt to create transparency. But they’re going to have to create a whole lot more transparency about how they handle these complaints.

Henry: Well, this is always what happens, right? The law always takes a prolonged period of time to catch up with technology. You certainly understand that. And I think that’s where we are.

But I will say ever the optimists, at least this morning, let me tell a quick story about what happened in the Tennessee legislature just this past session. Representative Mike Sparks, actually carried a bit that was fairly similar to what DeSantis just signed in Florida, and his ability to crack down on Facebook and social media’s quite obvious bias that’s going on right now.

Now, I don’t believe it made out of sub-committee. I’m almost certain it didn’t make it out of committee, but Representative of Michael Curcio made a fairly interesting argument in subcommittee, something to the effect of…

Cunningham: For or against?

Cunnigham: Good. Thank you for that.

Henry: Yeah, he made your arguments against why this shouldn’t pass. And his argument went something like this. He said, hey, I was just hanging out with my nieces over the past weekend, and I asked them something about Facebook.

And they almost give me this stunned, stoned perplex look on their face like they didn’t know what it was. They just don’t know what Facebook is. They’re not on there anymore. They don’t use Facebook.

So Curcio’s point was given another five years, and this entire argument itself will be moved. It will be obsolete because the product itself will no longer be used by the upcoming generation.

There are such a plethora of things to choose from nowadays, whether it’s Snapchat or Twitch, or TikTok. I can’t even remember all of them. And here’s the point that I’m making. Conservatives, here’s the optimism thing.

Conservatives, we believe in free-market choice, and we are doing that. If we can’t get the legal side, we are making the act of choice. Look what we did with Parler. We pushed that to the moon and back.

We pushed it so far that they shut it down and you can’t download the app anymore. Conservatives, we do believe what we say. We believe to some extent. And I think we actually go out there and use the alternative forms of media if we’re being censored on the other one.

Now, I think there is some conjunction use between making the legal aspect there. I mean, understandable fair, and free and at the same time, forcing free-market decisions to hold Facebook accountable at the same time.

Botteri: I’m sorry, but the thing of it is that when you have behavior that is unacceptable where a platform is, behaving like a publisher, you need to enforce the law.

Cunningham: Yes. I don’t think there’s any question. Something’s gotta change. Somebody has got to feel some pressure for free speech. And hopefully, that will evolve into something that’s useful to everybody.