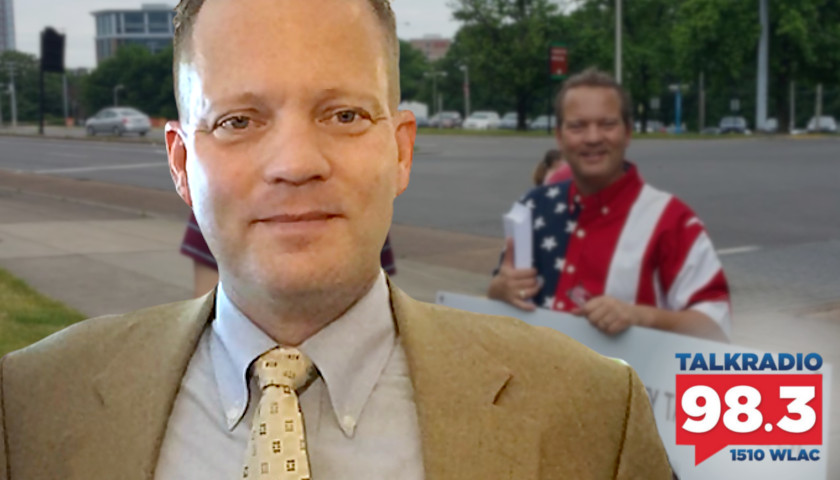 Live from Music Row Friday morning on The Tennessee Star Report with Michael Patrick Leahy – broadcast on Nashville’s Talk Radio 98.3 and 1510 WLAC weekdays from 5:00 a.m. to 8:00 a.m. –  host Leahy welcomed Nashville attorney Jim Roberts to the newsmakers line to give updates on the validation of sufficient petition signatures needed for the Davidson County Election Committee to vote and why they are stalling.

Roberts: Good morning. How are you all doing on this beautiful day?

Leahy: Well, we’re doing great. Tell us where this charter amendment to roll back the property tax of 34 percent based upon the assessed value of the properties. Where does this stand?

Roberts: Well, we’re moving the ball down the field. As some of your listeners probably know last Friday, the mayor went on the offensive and tried to fool people into thinking that he was going to be lowering the tax rate so we wouldn’t have to have any sort of Nashville Taxpayer Protection Act. I think that backfired on him. He was clearly not telling the truth to people. We’re moving forward. The Election Commission has now finally voted and acknowledged what we all knew, which was the August election last year is the election that it’s based on. And they’ve admitted we have enough signatures.

Leahy: Have they confirmed that you have enough signatures to get on the ballot?

Roberts: They have. They confirmed that we had 12,300 and something signatures. And they have said that all we were required to have was 12,100.

Leahy: Have they officially said, you have enough? You have passed the test on signatures. You will be on the ballot. Have they communicated that to you?

Roberts: No. What they said is we had enough signatures, but they didn’t vote to put it on the ballot. For some reason, they are holding that up.

Leahy: When will that happen?

Roberts: Well, we thought it was going to happen yesterday actually. We are not sure why the Election Commission is dragging its feet. We think it’s because the opposition is gearing up to Litigate and they’re expecting to get sued and they want to wait to see if anybody follows them a lawsuit. As you know, there have been some secret groups put together using phony names to contact and harass people who signed the petition.  And there’s been a real concerted effort of that to intimidate people. I don’t think it worked very well. But at least they’re trying very hard to intimidate people who signed the petition.

Leahy: But there’s a reason.

Carmichael: Jim, are you saying then that officially the Election Commission has ruled that you have met the number of signatures requirements? So is that now done?

Roberts: No. The commissions and bodies like that operate through their votes. So they have said in the meeting that we have enough signatures, but they haven’t voted to put it on the ballots. I don’t know why. It doesn’t make any sense.

Roberts: Well, there’s no provision in the law to do that. But these folks aren’t really obeying the law. They don’t really care. Part of the way they gather the signatures is like getting a secret copy of the database that was released to them prior to the public knowing. And we know this for a fact now that they were given a copy and that they use that to reach out to people.

There is no provision for, quote, unquote withdrawing a signature. We actually have several hundred more signatures that we could turn in that came in after the day we turned them in. So if they want to get into the, well I want to withdraw the signature game, and we’re going to say, well, look, we got more people who want to turn in signatures.

Leahy: Jim, we have a story, the transcript of the attorney, Jamie Hollin who, you know, who’s representing the Nashville Business Coalition. On Saturday, he made a case. He spoke to the Election Commission, and I think he alleged that some of the signatures were not valid. And there was a problem with the verification process. Have you followed that? Is that a factor in this at all?

Roberts: Well, of course, we expect him to say that because he’s against it. The opposition of this is going to do everything they can to nitpick this step, can submit, pick this death, and no other valid initiative ever been. It fixes as much as this one. And it’s because, of course, the mayor doesn’t want it on the ballot. One of their argument is to say that somehow the addresses aren’t the way they want them. What Jamie Hollin sort of glosses over is that the Metro Charter doesn’t require me to gather or 4 Good Government to gather any addresses. All it requires is the voter’s signature. So to go in there and argue that somehow the address wasn’t the way he liked it is just patently dishonest.

Leahy: But Here’s the problem. There is a red flag here. The Election Commission has not voted formally to say you have enough signatures. And do you know when they will meet next and when they will make that vote?

Roberts: We certainly expected it yesterday, actually. No, I don’t know. They announce their meetings about two days in advance, and we’re just waiting to hear that. There is nothing wrong with those signatures. This is just pro-tax people trying to undermine the public confidence in this.

Leahy: But don’t they have a timeline in which they have to review these signatures?

Carmichael: How much time do they have? What is the time limit?

Roberts: I believe they have about another eight days because the ballot has to be approved by the State Election Commission and then it has to be mailed out. We have early voting. We have overseas ballots. There’s more to it than just having an election on that day. It is my belief that the mayor is putting tremendous pressure on certain election commissioners and that there are people who just don’t want people to vote on it. Remember, the whole goal here is to get it on the ballot to let the citizens vote on it.

Roberts: They said that on August eighth, actually.

Roberts: Unfortunately, I’m not on the election Commission, so I can’t tell you that. Again, I think they are being pushed to stall in delay because possibly Jamie Holland or other Protax forces are going to try to file some sort of preemptive lawsuit.

Leahy: What are the odds? What’s the likelihood that within eight days, the National Davidson County Election Commission meets and says the National Taxpayer Protection Act has met the standard, and it will be on the ballot? What’s the probability that will happen?

Roberts: Well, you’re way ahead of we were giving them to yesterday to have a vote to see what happens. And you’re absolutely right. That is our next step to go ahead and turn those signatures in. And I would note to your listeners, the Election Commission has said that they have to be a little over 12,000 signatures. We believe that’s wrong. That’s based on the number of people entirely devoted. But a lot of those people voted in a state and federal primary back in August. Only about 93,000 people voted in the election that matter.

Leahy: Jim Roberts, thank you so much for joining us today. We really appreciate it. Come back next week and give us an update if you would please.

Roberts: I’ll do it.