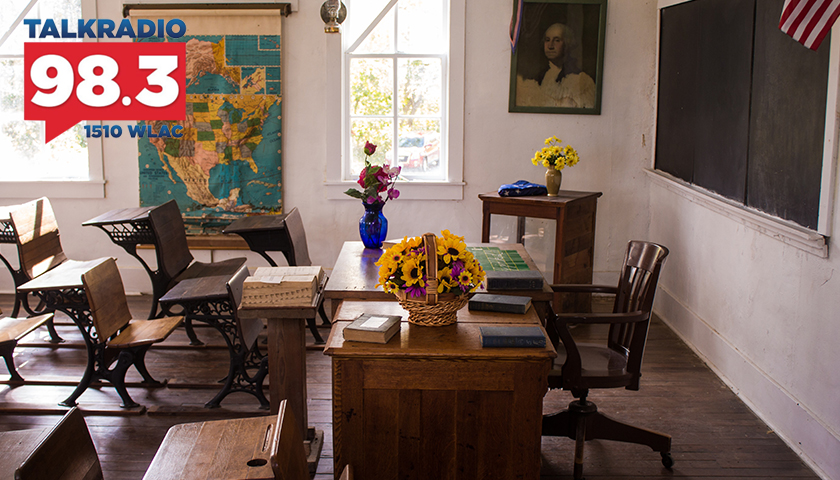 Leahy: In studio the original star panelist Crom Carmichael. Crom, during the break, we were talking a little bit about this new book from Os Guinness, the great writer, great Christian political philosopher. He’s the guy who came up with the concept that our country is based on the Golden Triangle of Freedom.

And that Golden Triangle is the following: Freedom requires virtue, virtue requires faith, and faith requires freedom. And it’s an ongoing circle. That was the character of America when we were founded. The problem is that character is being assaulted in our schools every day. And particularly through critical race theory.

Leahy: Os Guinness has a new book out called The Magna Carta of Humanity. We’re trying to get them as a guest. I think we’ll get him as a guest in the future. And I’m going to try to get them on a day that you’re here Crom because I think you enjoy talking with him.

Carmichael: Sure. There are two or three articles that are all about education and as I was driving in I was listening to your interview of Gabrielle Clark.

Leahy: Right. The biracial mom whose child refused to comply with an assignment in which he was compelled to admit that he was an oppressor as a mostly white person.

Carmichael: Here’s what was interesting about listening to that interview. She says that we have to stand up and fight. It cost her $200,000.

Carmichael: If you go to a restaurant where your service is bad, you don’t need to go hire a lawyer. What do you do?

Leahy: You don’t leave a tip.

Carmichael: And you don’t go there anymore.

Leahy: You do a Yelp review.

Carmichael: And you don’t go there anymore. But the reason that she has to stand up and fight is she’s being forced. Her child is being forced to go to a particular school and to have a particular curriculum with which she disagrees. And this is what’s fundamentally wrong with our educational system.

We don’t have a choice. And if you had school choice and then the kids who attend the charter schools here in Nashville on balance do much better than the kids who go to what I’m going to call the regular government-run schools.

Leahy: Uh oh. I know this is going to be a crazy story already. I don’t know what the story is.

Carmichael: It’s a sad story. California had gone for a number of years where they had worked seriously at improving the math skills of students who attended the government-run schools in California. At one time, I’m quoting from the article here in The Wall Street Journal.

‘At one time, California took the goal seriously and made immense progress. California Department of Education data shows that while only 16 percent of students took algebra by the eighth grade in 1999 by 2013, it was 67 percent. Almost four times as many.

Leahy: That’s surprising that they made progress from 1999-2013. That’s interesting.

Carmichael: But then that’s when things started to unravel across the state. And so they also had gifted classes, kind of like AP classes. And now they want to do away with all those because they’re claiming they’re racist.

And you have the schools for the gifted which they are strongly considering doing away with completely. And then changing the math curriculum so that it is almost impossible to fail (Leahy laughs) because they’re actually claiming that math is not something that needs to necessarily be specific.

Leahy: Try building a car with a non-specific specialization.

People who have the money to attend private schools their children are going to have an opportunity that the children who are going to the government and schools don’t have. And this is along those same lines. It’s not academically, but it’s about a school board. This is in Monroe County, Indiana.

Carmichael: The school board passed a resolution that says that the school resource officers cannot carry a gun.

Leahy: What are they supposed to do, just point their fingers?

Carmichael: That’s a great question because one person said there’s no evidence ever that a resource officer ever had to use their gun.

Leahy: If you have a gun you may not need to use it.

Carmichael: As it turns out,  that statement itself is false. And so there are instances where the resource officer had to use his gun to disarm a student that was identified as having a gun. But if nobody in the school is going to have security, that flies in the face of logic, because every place else where security matters. If you want to go into the Nashville courthouse, don’t you have to pass through security? Aren’t the security people armed? Yes.

Leahy: Would you like to hear the rest of the story?

Leahy: Guess where Monroe County is.

Leahy: Bloomington. Home of the University of Indiana.

Leahy: Explains it all.

Leahy: These are all probably a bunch of college professors on the board.

Carmichael: Could could be.

Leahy: Good news. Our listeners have been listening for, like, two and a half hours to get the first bit of good news.

Carmichael: No, we’ve had some other good news that we’ve talked about. But this is good news. In the state of Florida, a teacher was fired for not honoring the ban on teaching critical race theory. This teacher just ignored the ban and kept teaching it and enforcing it. And bam!

Leahy: Governor DeSantis is not fooling around.

Carmichael: If the CEO of a company puts out an edit, that is a logical edict and lawful and some employee essentially gives the CEO the middle finger…

Carmichael: And nobody questions it.

Leahy: Now, let me tell you what the potential difference may be here in Tennessee. We have a state law that the bill that the General Assembly has passed that would prohibit, in essence, the teaching of critical race. There. 14 tenants. Sources tell me that Governor Lee will sign that bill.

We’ll find out. There’s some time to see on that. But if it becomes law, it has a certain provision in it. And that provision says that if a school district continues to teach critical race theory, the Commissioner of Education has the authority to withhold state funds from them.

Something is about to be set up because our lead story at The Tennessee Star is Memphis City Council adopts a resolution opposing state band on critical race theory. So Memphis and Shelby County schools, I can tell you right now if the governor signs this bill, they will defy it.

Carmichael: Let me ask you a question. You said two things there. You said Memphis and Shelby County.

Carmichael: Will they both, or will it be just the Memphis schools?

Leahy: This is from the City Council.

Carmichael: Memphis is in Shelby County.

Carmichael: But there’s a lot of Shelby County that’s not Memphis.

Carmichael: Then the Commissioner can do what?

Leahy: Under the bill, the Commissioner will have the authority to do withhold state funds from Shelby County schools.

Carmichael: And that’s it. They can’t fire them?

Carmichael: If they stick their finger in her eye we’ll see if she blinks. (Laughs)

Leahy: Yeah, I think she’ll blink. But we’ll see. Maybe give her the benefit of the doubt until it happens.

Carmichael: Absolutely we should do that.

Leahy: You are much nicer than I am.