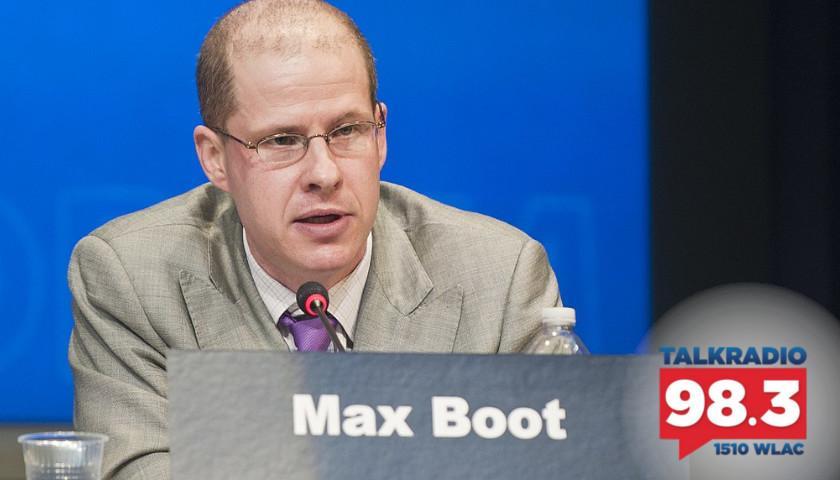 Leahy: On the newsmaker line, Josiah Lippincott, who you may not have heard of, but apparently The Washington Post has heard of. Welcome, Josiah to The Tennessee Star Report.

Lippincott: Hey, awesome. Thank you so much for having me on, Michael.

Leahy: So, Josiah, you are a Marine veteran. When did you start to serve and in what capacity did you serve?

Lippincott: Yeah, I served between 2016 and 2020. I was in the Marine Corps and I served in the artillery, specifically the rocket artillery with HIMARS. So I was a platoon commander and then did liaison work.

So I did a lot of reaching out to other units, deployed to Okinawa, and then traveled around the Pacific working with fires. Integration is what we called it.

Leahy: Well, J.C. Bowman, who’s in-studio with us here, is also a Marine veteran, and I think you probably have two words for him.

Leahy: So now you’re a graduate student at Hillsdale. What are you studying?

Lippincott: Yeah, so I’m interested in foreign policy and war, and that’s largely a byproduct of my time in the Marine Corps and what I saw while I was in, and some of the criticisms I have of the military establishment and wokeness.

But my interest extends to political philosophy in general. I think philosophy means a love of wisdom, and I think we need a lot more wisdom in this country.

There’s a lot of insanity. I thought it was important to take seriously the old books and to think clearly about new ideas.

Leahy: Last year, a major general, I think he was in the Army, Patrick Donahoe, posted a message encouraging soldiers to get vaccinated against COVID-19. This is the same COVID-19 that Pfizer just admitted that, yes, we didn’t have any evidence that it’s going to stop transmission of COVID-19.

And to me, this policy is really more designed to limit the number of people actually in our armed forces. That’s my view, not yours. My view. And it’s all part of the wokeness of the Biden maladministration.

So you wrote in response to that, that, “The lockdowns, liberty restrictions, quarantines, and general disruption of service members’ lives is a way bigger killer than the virus.” Yes, I would agree with that.

But this major general engaged in an online back-and-forth with you, and he ended up really demeaning and insulting you and Hillsdale. He said, hey, Hillsdale, come get your boy.

Lippincott: Yes, General Donahoe and a lot of people are misstating my comments now because it’s in the news, and I’m sure we’re going to talk about that now, why the story is back in the news.

And so what I pointed out was, okay, we have a massive increase in the Delta when it comes to suicidal ideation among service members.

And the most obvious reason is their lives have been upended by these crazed policies that are not backed up by any kind of common sense or scientific evidence. And the general’s response was petulant.

It was snarky, it was offensive and insulting, and it was demeaning to his own rank. But it was par for the course for a group of military officers on Twitter collectively known as Military Twitter.

And so I took issue with that. And so I ended up being one of the most prominent critics of this section of the internet, and that has ended up being a pretty newsworthy item over the last year or so.

Leahy: So this character, Max Boot, who fashions himself a military expert, I don’t believe he’s ever served in the military. I could be wrong about that, but he’s a columnist for The Washington Post, and he wrote a piece last week defending this major general and criticizing you. What’s your reaction to Max Boot?

Lippincott: Well, it was to savage him in my own column at American Greatness. And I pointed out, look, this guy is a noted drag queen show enthusiast, a defender of the Iraq war, a warmonger, and he’s also a Never Trumper. So those things, of course, all go together. Actually, those are far more related than I think a lot of people understand.

What Boot said was that I was a troll who was part of the far-right forces trying to subvert American democracy, which is absolutely ludicrous. What I’m trying to do is make sure we have a military that actually serves our interests, and someone like Max Boot is interested in having the American military serve the interests of literally everyone else in the world.

Someone like Max Boot thinks the most important thing the military does is fight wars in Asia or give money to the Ukrainians. And I think the most important thing our military should do is protect Americans and protect our rights and liberties. And this is a major point of departure between me and Military Twitter, and it’s worth noting, like, why is this story coming up now?

It’s that General Donahoe’s retirement was put on pause because of an army investigation into his activities on social media. He attacked Tucker Carlson. He engaged in improper fraternization with a junior officer, which means favoritism to a young woman within, I think, his chain of command. And the point that the Army made is they’re putting his retirement on pause.

I have no doubt that General Donahoe is going to end up collecting millions of dollars in money and his pension from the American military before all is said and done. But I think it’s damning to look at the ramifications of a career like that of Patrick Donahoe and that of a public columnist like Max Boot, people who are consistently wrong and have overseen failure after failure. So, yes, I guess I’m trying to subvert that kind of failure. But I’m not a troll. I’m a very serious, very serious critic of what I see as gross incompetence by people in power.

Leahy: So here’s the problem as I see it – and I did not serve in our military, but I certainly support all our armed forces. And I think we should have a strong military under the Biden maladministration.

I think we have a weak military and it is led by a bunch of propagandists who are promoting woke ideology. That’s the problem. And the vaccine mandate is pushing veterans or service members out. Our recruitment is down. How do we fix this?