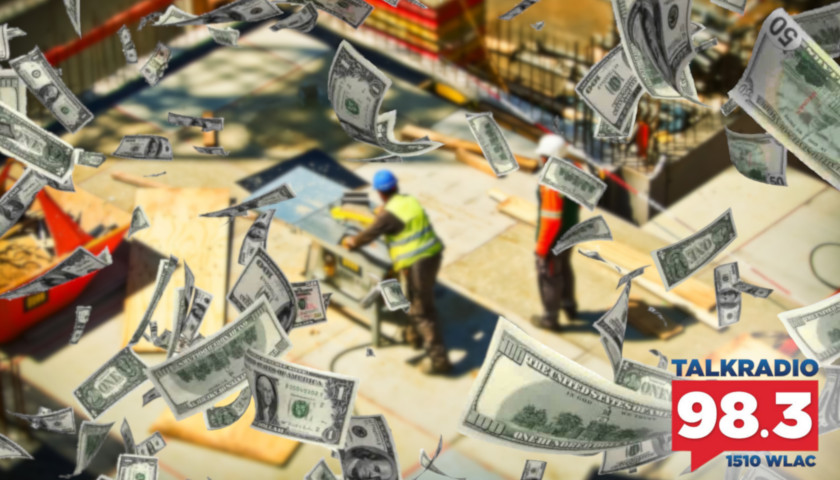 Live from Music Row Tuesday morning on The Tennessee Star Report with Michael Patrick Leahy – broadcast on Nashville’s Talk Radio 98.3 and 1510 WLAC weekdays from 5:00 a.m. to 8:00 a.m. – host Leahy welcomed Grassroots Engagement Director of Americans for Prosperity-Tennessee Grant Henry, who weighs in on infrastructure spending and budget reconciliation in a partisan Democratic Congress.

Leahy: That’s Senate Minority Leader Mitch McConnell. I have two thoughts on his statement. First, it’s very obvious that inflation is a problem. Second, we need to have him here in the studio, and I need to give him a cup of the TriStar Trio coffee because he sounds like he’s asleep. (Laughter)

Ogles: Unlike the rant we just heard a moment ago.

Leahy: Unlike the three of us who are duly caffeinated and ready to rock and roll. Grant Henry, grassroots director for Americans for Prosperity of Tennessee. This infrastructure bill.

I can’t see any other direction – the consequence of this infrastructure bill – other than to dramatically continue the increase of inflation. What’s your thought on that?

Henry: Milton Friedman told us that inflation is essentially taxation without legislation and typically hits the lower-income individuals. Von Hayek told us that he said this: “I do not think it is an exaggeration to say history is largely a history of inflation. Usually, inflation is engineered by governments for the gain of governments.”

Friedrich von Hayek, a great, great economist. His famous work, The Road to Surfdom. That’s the guy you’re talking about there, right?

Henry: That is correct.

Leahy: And he is your best buddy.

Henry: (Laughs) Sure. Let’s say that. Let’s go with that.

Leahy: Andy Ogles, I look at what they’re trying to do, and there are a couple of elements here that really strike me. Number one, I don’t see how this is at all consistent with the American tradition of the legislative process. What’s your reaction to that, Andy?

Leahy: Let’s talk about that. Explain to the audience what we mean by budget reconciliation. The Senate has a procedure by which they can essentially allocate monies and appropriated dollars for things that otherwise did not go through the normal legislative process. That’s a simplified version.

Leahy: And they’re supposed to be able to do it once, maybe twice a year, right?

Ogles: Yes. Look at legislative intent. This is something that should be done only as of the option, of last resort, and where there’s something that has to be done at the last minute. Otherwise, that could not flow through the normal process.

But what’s happened is that Congress is so partisan that it now is just the normal course of business, which is now stripping we the people of our normal representation. Because whoever is a majority controls the purse strings.

Leahy: Right. And it’s not a give-and-take legislative process. It’s my way or the highway with no give-and-take whatsoever from the Democrats. That’s what it seems like to me.

Ogles: The Senate has a lot of very formal rules that they can use, like the filibuster and things like that. And so it’s now become an issue of which side is better manipulating the rules to control what happens in the Senate.

Leahy: Grant Henry, you’re a graduate of law school, and my question to you is, the parliamentarian plays a role in the Senate.

Are you familiar with what their job is and how they can determine whether or not something should be included in this budget reconciliation process?

Henry: I’m not as familiar as I should be. And frankly speaking, I think there are very few people out there that are qualified to comment on that. There are a few.

Leahy: I may not be qualified, but I’ll comment on it. (Laughter)

Henry: But here’s what I’m saying. I think Mayor Ogles is correct that in the early 1970s we had this process of a reconciliation that was introduced primarily because we said, look, if we’re entering the day and age of partisan politics, we still have to pass a budget. We still have to spend money and make the government operate effectively or at least at all.

At each step back and forth continued, and then there would be a vote on the floor. Regular order has been disbanded by the Democrats, Nancy Pelosi in particular. And so they’re just in the land of the jam-through is what it seems like to me.

Henry: Yes. And I think that jam-through, which you really see a lot of times, is coming through this thing called the Byrd Rule, which is where this sort of parliamentarian is supposed to play a major role.

Henry: I believe so.

Leahy: From West Virginia. He’s a Democrat by the way and his big ally in the Senate, Joe Biden.

That’s the point of the reconciliation process that you don’t need bipartisan support to push something through. This Byrd Rule is a process by which Republicans should – in big air quotes in the studio here – should be able to say these certain things that are included in your $3.5 trillion package have nothing to do with what said that we’re spending money on.

That being if you’re gonna spend $3.5 trillion or rather, $500 billion on healthcare spending and call it an infrastructure spending, we’re gonna cut that out of your spending package through this Byrd Rule.

Now, much of that, I think, is left up to this sort of parliamentary procedure or that one individual to say what is and is not considered a part of the spending within that overall proposal or package.

That’s again, why I personally believe your voice matters so much now, to contact those senators, contact your legislators. Let them know if it’s this razor-thin, listen to me now more than ever.

Leahy: Andy Ogles, so there is a parliamentarian, and that recently appointed parliamentarian has ruled, that you can do it once and maybe twice, but only with certain circumstances.

Ogles: Well, just my opinion, but I don’t think they’ll care. The question is, can he move forward without an official ruling? I’m not a huge Mitch McConnell fan, I won’t go into the details. But all that to say, he has been a master of the Senate rules, which is why he’s been such an effective leader over the years.

This is where the Republicans are going to have to use the rules to their favor to try to block this, because, again, they’re not trying to pass a basic budget.

They’re not trying emergency spending for troops that are overseas or something that really necessitates this emergency action. And I think that’s really how you should look at budget reconciliation.

This is, again, the option of last resort. It should only be used where, again, you’ve hit gridlock to the point where basic functions of government are no longer working.

Leahy: The problem with that is that the Democrats have abandoned the concept of bipartisan cooperation. It’s my way or the highway.

Ogles: And they’ve abandoned the Constitution altogether. Look at what they’ve done during COVID.