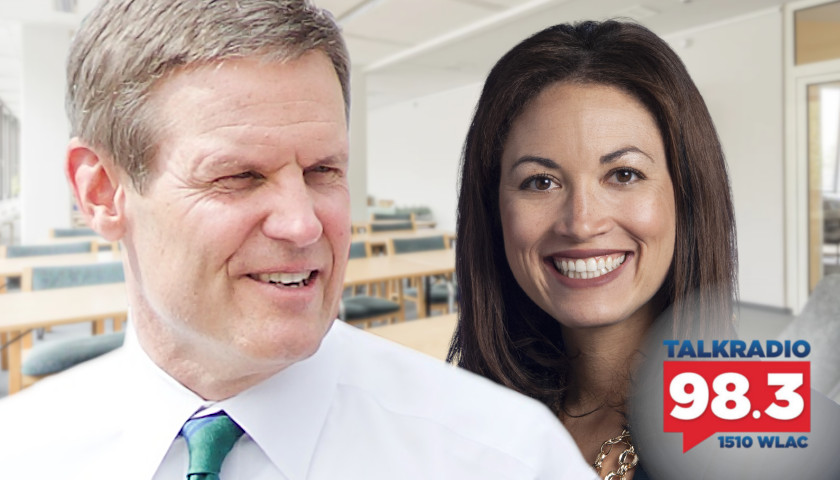 Live from Music Row Tuesday morning on The Tennessee Star Report with Michael Patrick Leahy – broadcast on Nashville’s Talk Radio 98.3 and 1510 WLAC weekdays from 5:00 a.m. to 8:00 a.m. –  guest host Ben Cunningham welcomed Tennessee House Speaker Cameron Sexton to the newsmaker line to further illustrate his position from Monday’s press conference where he, Governor Lee, and Penny Schwinn stood firm on getting children back to class with parents at the wheel.

Cunningham: My name is Ben Cunningham and I’m sitting in for Michael Patrick Leahy at the big Tennessee Star microphone this morning while Michael is away. He is expanding an ever-expanding media empire and getting more and more outlets for us conservatives.

Sexton: Good morning. Thanks for having me.

Cunningham: Yes, thanks so much for joining us. You had a pretty amazing press conference yesterday and kind of threw down the gauntlet on behalf of students and parents in Tennessee.

Sexton: Yes. Yesterday the governor and Commissioner Schwinn were announcing the TCAP results which was not good. Basically, we’ve lost a lot of the ground. We’re back to around where we were in 2015 and 2016 on proficiency. It’s all across the board. All subjects. All grades.

It was not a good day on TCAP. And the interesting thing is, there were individuals in the session who is trying to tell us, oh, learning loss is not an issue.

Well, it really is. And when you don’t have kids in school and you have them doing remote work or you have them do virtual education or you just close down the schools as some did, you see what the results are.

And now they’re trying to use COVID as a reason why they maybe need to close down schools, require mask mandates, maybe segregate kids on who’s vaccinated and who’s unvaccinated. And the data doesn’t point that that needs to happen with the children and that they actually need to be in class. It needs to be in person. I think the majority of teachers agree with that as well. And so basically what I said, you know what? Schools if you want to shut down, if you want to require a mask, if you want to segregate kids based on who’s vaccinated or not, I’m going to ask the governor for a special session. And we’re going to go in and we’re going to make some changes, and that may be going in a direction called school choice. And let parents decide where they want to send their kids if the school system there is not doing what’s needed to get done to get their child educated.

Cunningham: Well, Mr. Speaker, on behalf of myself personally and all the folks that I talk with around Tennessee, this is an amazing measure and press conference. I think many people in Tennessee would like to have the option to choose their school if the school that they’re going to is not performing. Can you tell us what would be the next step? What would trigger your action at this point?

Sexton: If the school system shut down, if the school system moved all their kids to remote learning or gave them hybrid remote learning, or if they started requiring kids to wear masks, I mean, all those things or segregated kids in the classroom. Those things would get me to ask the governor for a special session. And we’ll come back in and take a look at it. There are schools right now debating whether or not our kids will wear masks and the data doesn’t point to that direction where that should happen. All data says is that children are less likely than anybody else to have severe COVID or to be hospitalized. And the survival rate for anyone below the age of 20 who gets COVID even with the new Delta variant is 99.99 percent. And so let’s just talk about the facts. Let’s talk about the data, and then let’s have that conversation. But kids need to be in class, and we can’t accept the second year of TCAP numbers to go down.

Cunningham: And that’s got to be music to the years of parents across Tennessee. And you were at the press conference. The governor was there. Senator Johnson, our education secretary. All those folks were there. And you guys are showing a very unified front.

Sexton: Yeah. I mean, I think we’re all on the same page. We want what’s best for the children. And the data doesn’t lie. I know there’s a lot of people out there who think that kids need to wear masks eight hours a day, every single day down to the age of two. I mean, I have a hard time figuring out why they’re so angry about allowing parents to make the choice. You have people out there who are so mad when you say what the parents should make the choice. If they want their kids to wear a mask, let them wear a mask. If they don’t want to, then they shouldn’t have to wear one. And there are people losing their minds out there because you’re saying the parents have a right to decide what’s best for their kids. It tells you where the left is in our world today.

Cunningham: It does. And I noticed several questions at the news conference to the governor or about that. Why don’t you listen to this group of experts? Why don’t you listen to this group of experts? The state government is there to serve the citizens and the parents initially, most of all. And thank goodness you guys are putting the citizens at the top of the priority list. I for one – thank you for doing that. The news conference was really amazing yesterday, and I think it puts educators and everybody else on notice that parents have got to be the major decision-makers in this process.

Sexton: It’s their children. They know what’s best. They’re going to do what’s best for them and their kids. And people who think otherwise, I just don’t understand that capability. And the other thing is they’re wanting to make examples of people being hospitalized. Well, the people who are hospitalized in Tennessee, I’ve talked to hospitals all across the state and 96 percent of the people in the hospital are unvaccinated people, and they’re the age brackets of 35 to 50. And what I say is, stop listening to the CDC. Stop listening to the national media people and just go have a conversation with your physician, your pediatrician, and your pharmacist and ask them what’s best for you and your family if you’re unsure. But talk to the experts who know about your health and have a conversation. Quit listening to the Washington bureaucrats and the state bureaucrats and the school systems. Have a conversation with the people who know about your health. And then you all make a decision that’s best for you and your family. It’s pretty easy.

Cunningham: Yeah. Absolutely. And so many people have tried to politicize this issue and have a political agenda behind all the press releases that come out. The scare tactics and everything. But I, for one, want to thank you very much for coming out. That was pretty extraordinary. I don’t think I’ve ever seen a press conference like that where you had unity of the legislative and the executive branch. And everybody was saying parents should be the ones who are making these decisions. That’s an extraordinary statement in this day and time.

Sexton: It is. It really is. And I’m glad to be a part of it. I look forward to continuing to work with Governor Lee and Commissioner Schwinn and members of the General Assembly, the House and Senate, and listening to the people in our district. And overwhelmingly the people in the district and people across the state of Tennessee believe kids should be back in school. That should be in person. They shouldn’t be doing remote learning. They shouldn’t be doing virtual, and schools should not be shut down. You shouldn’t be requiring a mask. That’s what the people in Tennessee want. But you have people out there, as you said, trying to scare people into believing something that the data does not support.

Cunningham: What is the next step in your decision? What would trigger you to call a special session and what are you monitoring at this point?

Sexton: We’re watching Shelby County looking at requiring mask mandates. I think Williamson County has something coming up where they’re looking at it. So we’re watching that. Davison County’s looking at it. Wilson County had a meeting last night. So we’re just watching. We made our statement. We put it out on record of what we expect, and we’ll see what happens. If people start going in different directions then we’ll go back here and I’m going to ask the governor for a special session. And hopefully, we’ll be able to get that done. And it might be three to four weeks later because by the time you get it organized and set. But I’m curious. If we need to go in, it’s a big enough issue for us to go on a special session to solve this really quickly.

Cunningham: And you can act within 30 days. 45 days. That certainly is a reasonable time frame. Is that correct?

Sexton: It is. You could act within seven days, but the problem is you would have members who might not be in town. People have work. And so you try to give enough time for them to clear their schedule and to be able to have a special session. But yes, you can call a special session within 30 days if you need to pretty easily.

Cunningham: Speaker Sexton, thanks so much for joining us this morning. I know you’re busy as a switch engine this morning with all the press and everything. But that was an amazing news conference there yesterday. And I personally cannot thank you enough for coming out and asserting this parent-centered agenda. I think that’s what so many people in the state want. And thank you so much for being bold and coming out yesterday and very positively asserting that agenda around parents and students.

Sexton: Well, thank you. You’re very kind. And I hope you have a wonderful day. I hope to see you soon.

Cunningham: Great. Thanks so much.