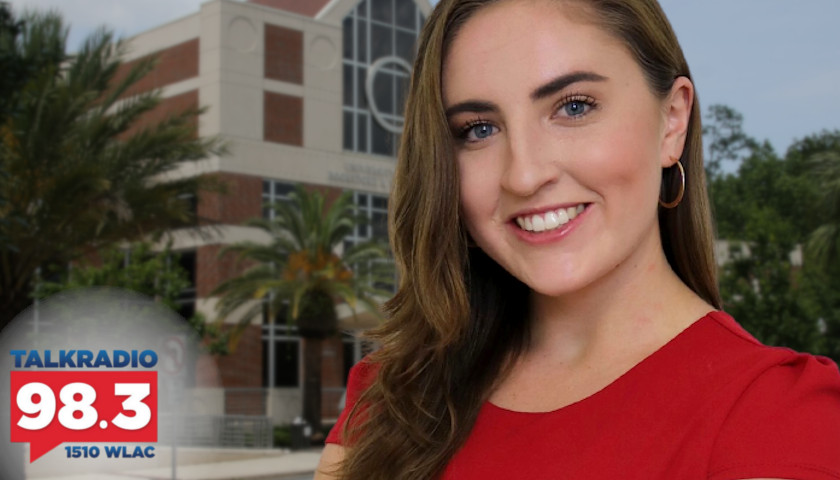 Live from Music Row Wednesday morning on The Tennessee Star Report with Michael Patrick Leahy – broadcast on Nashville’s Talk Radio 98.3 and 1510 WLAC weekdays from 5:00 a.m. to 8:00 a.m. –  host Leahy welcomed the Co-President of the (NeW) Network of Enlightened Women at the University of Florida, Ophelie Jacobson to the newsmakers line to discuss her recent op-ed on cancel culture and being a conservative student in college today.

She penned an op-ed that was first published at the Sarasota Herald Tribune. That’s a Gateway-Gannett publication in Sarasota on March 7. The title is, Can We Just Cancel the Cancel Culture? Good morning over Ophelie.

Jacobson: Good morning. Thank you so much for having me on.

Leahy: Are you in Gainesville today or are you at home?

Leahy: Do you go back to classes in the fall and will they be regular? Will you have to wear masks and will you be in dorms?

Jacobson: So I attend the University of Florida. I’ll be back in person. I was in person for the past year, actually staying in a dorm for my sophomore year. A lot of my classes were online over Zoom, but just recently, actually, on Monday, the university sent out an email saying that masks will not be required on campus for those who are vaccinated, and they’ll be strongly suggested for those who are not vaccinated yet. I’m really excited to see a return to normal on campus in the fall.

Leahy: How weird is it to go to college and do most stuff online and have to wear these dopey masks? What was that year like for you?

Jacobson: It’s definitely different. It definitely has its ups and downs. But with online classes you can wake up 10 minutes before your class, roll out of bed and hop on Zoom. But with in person classes you have to get up, get ready.

But I’m really looking forward to going back to in-person classes because you really get that connection with your professors, with your fellow peers, and students. And you’re also able to concentrate more when you’re in a classroom setting rather than just staring at your computer for hours on end.

Leahy: Let me read the first few lines of your op-ed. It was excellent by the way.

Leahy: Florida State University removed a statue of Francis Epps VII, the former Mayor of Tallahassee and grandson of Thomas Jefferson. Protesters in Chicago tried to tear down a statue of Christopher Columbus. A statue of President George Washington was vandalized and knocked down by seven people in Los Angeles. All of this during the year 2020 alone. What was their sin?

Jacobson: I think their sin was definitely the cancellation of America. Cancel culture, as we’ve seen in the past year, it ceased to destroy a person or a company’s image based solely on personal disagreement. So I would argue in the year 2020 alone, we saw a direct attack on America and American history.

And so the canceling of America is very concerning in our country because if we’re not able to have statues that just simply represent our past as a nation, that yes maybe it has negative parts in American history, but it’s our history nonetheless.

And we should be upholding those basic principles of our history in order to teach our future generations. If you just think about what we’re going to teach the next generation of leaders, they’re not going to have anything to base their history off of if they walk down the street and all the statues are torn down.

Leahy: I learned something from your piece about this fellow, Francis Epps VII. He was a grandson of Thomas Jefferson, born in Monticello and moved down to Tallahassee when he was, I don’t know, 27, 28. A young man when there wasn’t much there in Tallahassee.

Turns out he was a slave owner. But also he donated the buildings and land upon which Florida State University was built. Did they have a list of his sins when they removed his statue? What was the controversy in Tallahassee surrounding that?

Jacobson: The main controversy was that he was a slave owner. And that, for them, that was enough. They said, “We have a long history of addressing difficult racism and inclusion issues on this campus and we know there is so much work to do as the nation faces great unrest and an urgent call for change. We as a University will continue to listen, learn, and evolve.”

And that was said by President John Thrasher of FSU. So that was one of their ways, I guess, of evolving in the wake of everything that was happening in 2020 was to remove this statue, which is unfortunate because like you said, he donated a lot to the University.

I think the students at the University owe him a lot as well for studying there and for using the buildings that he donated. It’s unfortunate to see that just because he was a slave owner in the past, that’s enough for him to get canceled and for a statue to be torn down.

And we saw that again, as I mentioned with Christopher Columbus, President George Washington. It’s super sad to see the cancellation of tangible reminders of those aspects of American history, which, according to these people, are deemed offensive and derogatory.

Leahy: Did you go to attend public schools in Orlando before you went to the University of Florida?

Leahy: How was American history taught in these public schools that you attended?

And again, every single country has its flaws but that doesn’t mean we should exclude that from the history that is taught in classrooms.

Leahy: What’s it like being a traditional American who likes to study American history? What’s it like at the University of Florida with your peers and the professors there over the past? What has your experience been?

Jacobson: It’s definitely a challenge that has its ups and downs. Being a journalism student as well definitely has its personal challenges. Just last year, I was in a reporting class, and I had a Professor and one of the first assignments that we had to do was to write a profile story about ourselves, our goals and aspirations, and what we wanted to do in the future.

And in that profile story, I’d mentioned that I want to work at a conservative media organization such as One American News or Newsmax. And two days after I submitted the assignment, I got a lengthy email from the professor criticizing my career goals and saying that OANN was fake news. I shouldn’t aspire to work there.

But because those goals happened to relate to conservative media outlets, I was automatically targeted. So what I did was I compiled a list of lawsuits that CNN and MSNBC have faced. And I sent that back to him. And I said, if we want to talk about fake news, let’s talk about CNN. Let’s talk about MSNBC.

And so he sent me an email back saying that oh actually, you’re a great journalist now, and I’m looking forward to seeing your work. (Leahy chuckles) And the rest of the semester, I worked really hard to prove him wrong. I gave 100 percent of my all my assignments, so he didn’t have anything to dock me for simply for being a conservative.

This is just one of the many examples. I know I’m not alone. A lot of the girls in our organization have shared similar experiences. So it’s just really unfortunate to see that Conservatives are being targeted on our campuses.

Leahy: What grade you get in that class?

Jacobson: I got over 100 percent. (Chuckles)

Leahy: Well, very good. He was biased, to begin with, but at least you showed him through fact and hard work, and they couldn’t give you a bad grade.

Leahy: I like that. When we come back, I want to talk a little bit more about what’s going on on campuses. Critical race theory and what it’s like to be a conservative in college today.