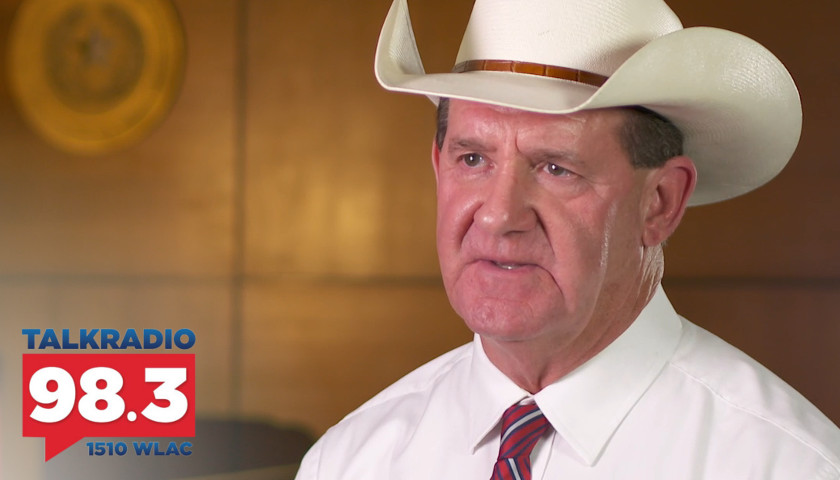 Live from Music Row Monday morning on The Tennessee Star Report with Michael Patrick Leahy – broadcast on Nashville’s Talk Radio 98.3 and 1510 WLAC weekdays from 5:00 a.m. to 8:00 a.m. –  host Leahy welcomed Jackson County, Texas Sheriff, AJ ‘Andy’ Louderback to the newsmakers line to weigh in on the crisis at the nations southern border and Biden’s unraveling of Trump policies.

Leahy: We are joined on our newsmaker line now by our friend, Sheriff AJ Louderback from Jackson County, Texas. Welcome, Sheriff Louderback.

Leahy: You and I met back, I think, a year and a half ago when you were in Washington, D.C., with a group of folks that were part of the Federation for American Immigration Reform. And right then you talked about the problems on the border. Since the inauguration of Joe Biden on January 21st, what’s happened to Jackson County? You’re about halfway between Corpus Christi and Houston. What have you seen that’s different in the past two months?

Louderback: I guess the best place to start is with these policies that have Joe Biden’s signature on them. We went from a very stable border to mass chaos here in Texas. So in the interior of Texas, where ICE has been completely nullified from their activities to the point where they have to even call a supervisor and have written express authorization to do almost anything.

We’re feeling the effects here as all Texas towns and towns throughout the United States are where we have people coming through again. We have illegal aliens showing up on people’s door steps from bailouts. We’re having our trucks stolen here in this area. We live geographically on the major corridor into Houston, Texas. And so it’s the number one human trafficking corridor and huge narcotics trafficking hub of Houston as they spread out to the rest of the United States. So it’s again: where to start, Michael?

It’s the same thing over except this one is much more pronounced and much stronger. ICE and CBP have both been completely taken out of the picture. I used the term gutted back in the Obama administration, and I don’t have a better word today other than they’ve done a much more thorough job of nullifying the federal law about this through policies and executive orders.

Leahy: Would you say the big administration is violating our immigration law?

Louderback: Clearly. They’re completing now through the NGO programs the final leg of the journey into the United States that the cartels used to do, and the cartels are still doing it. But the U.S. government is essentially complicit in that or however, you want to call it. But in McAllen, Texas, which have numerous friends on border patrol and ICE and so forth, and I get the video he sent to me and long been a proponent of a secure border.

I just think that that’s essential to having a country. And obviously, I’m in disagreement with the administration where we have no borders. I call it a zero border today. And we feel the effects here as every state will feel the effects as more and more come in and are transported into the cities and counties across our nation.

Louderback: It’s a fascinating area. That’s the one I’ve explored extensively over the years because, obviously our founding fathers I consider much about this as far as a border state and states rights. That’s exactly what the governor can do in the state of Texas, New Mexico, Arizona, and California. So I know it’s being explored extensively.

I’ve seen some things out of our Texas governor here, Greg Abbott, and expecting some more. Our Texas AG here has lashed back with lawsuits on the deportation. And we were able to get a 100-day pause on that or so. It appears right now that we don’t have a lot of options or options that are actually being exercised. So waiting on that and exploring that and urging states to pay back in this issue as we become invaded here over and over with a steady stream of people.

Leahy: Sheriff Louderback, I saw that here is an idea from somebody who doesn’t live on the border, but who looks at what states can and cannot do. I saw that Governor Abbott deployed about 500 Texan National Guardsman to be on the border. Was that effective? Is there an opportunity to do more of that kind of thing or not?

Louderback: Well, Michael, I think it has value. Is it the most effective? I’m not sure. I’m glad that something’s being done. And I’m sure the extra help is certainly needed down there. They need resources and those guys are already exhausted. They’re demoralized to the point where imagine you went from a secure and stable border to a policy that completely destroys everything you’ve worked for, for the last two years with policies, no matter if anybody liked them.

The border hadn’t been that stable. And I like that word because the border is a unique area between any country. And it was very stable. We didn’t have any problems. It was more stable and had been in probably 50 years as far as the policies that were in place by the Trump administration. The military was down there and he sent extra troopers down there under Operation Loan Star.

The state lacks the ability currently to be able to turn back the tide and say, look, go back into Mexico and we’re going to restore some type of order on legal immigration coming into this country. Border security under its basic concept would be you were able to do that exactly the way we’ve been doing it in the last two years. So instead, we have mass chaos.

Leahy: If the President of the United States does not enforce existing administration in immigration law, in your opinion, is that an impeachable offense?

Louderback: Well, for me, certainly. I’m a strong advocate for a secure border, and I think you should be able here in the United States to control who comes into your country and who doesn’t? Just the very concept of that is just very basic to me. Very fundamental. As far as being a country obviously, there are people who disagree with that. We shall feel the effects of this. We already are.

The cartel grows ever stronger and enriched by these policies to the point where I don’t think most Americans understand the amount of money that the cartels have and their business model which is one of the most efficient in the world. And I don’t think most Americans understand exactly the types of money and how they profit from this policy here. So we actually have a war going on now on both sides because there is so much money involved. The cartels will actually even fight each other.

Leahy: Was the U.S. police officer hurt in that?

Louderback: No. One was intercepted. But intelligence was very clear on it as to what was going on. So it resulted in a four-day search or so. Again, this is in Arizona from the sheriffs there that relayed this to Texas authorities that certain areas where the cartel gets upset with things and then they’re certainly able to put hits out on just about anybody they want.

Leahy: Sheriff Louderback of Jackson County, Texas. Please come back in about a month and tell us if it’s gotten better or worse. Thanks for joining us this morning.