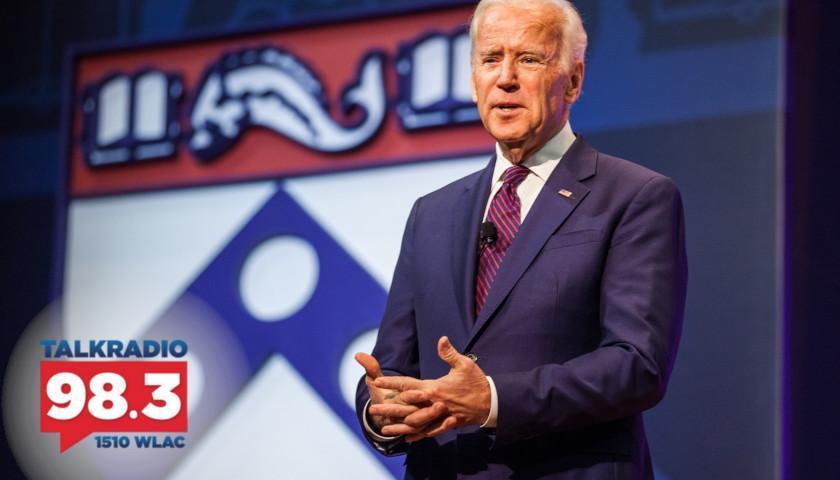 Live from Music Row, Wednesday morning on The Tennessee Star Report with Michael Patrick Leahy – broadcast on Nashville’s Talk Radio 98.3 and 1510 WLAC weekdays from 5:00 a.m. to 8:00 a.m. – host Leahy welcomed Neil W. McCabe from One America News Network to the newsmaker line to discuss breaking news regarding the knowledge of fiber trunks which run underneath the Penn Biden Center that housed classified documents.

Leahy: One America News Network has offices at 101 Constitution Avenue in Washington, D.C. When you go on the elevator there, do you see the sign for the Penn Biden Center?

McCabe: (Laughs) I haven’t been there recently. I used to see it all the time. That’s a very secure building. You can’t even get into the lobby without some security guard saying, hey, where are you going? And then you say, I’m going to get some coffee. He’s like, oh, okay. (Laughter)

Leahy: We have a story. Our own Bradley Vasoli for The Pennsylvania Daily Star and The Star News Network. We’ve got a story about this 13,800 square-foot Penn Biden Center in that building where you could get in and out of often.

They had a whole bunch of interns from the University of Pennsylvania running around while they had these classified documents there. How they got there, no one knows from Biden’s time as vice president just running around there. It sounds very secure to me.

McCabe: Yes. I’ll break some news, I guess. There are two major fiber trunks under the District of Columbia, and one of them passes underneath that building.

McCabe: This is owned by the Brotherhood of Carpenters. The carpenters union owns that building. That’s why there’s never any protests; there’s never any trouble. (Leahy laughs) I don’t know if you’ve ever run in with the carpenters, but the best thing you can say to a group of union carpenters is, have a nice day, sir. I’ll walk around. (Laughter)

Leahy: What’s the significance of the fiber trunk running directly under that building?

Somebody who was involved in the inaugural planning for George W. Bush’s two inaugurations mentioned it to me the other day. And I mentioned it to you. Just to throw that against the wall.

Leahy: Just in case there’s some communication coming out of the Penn.

McCabe: But they said that it was a security consideration when they were planning the inauguration because, obviously, the inauguration is held at the Capitol. 101 Constitution is maybe a quarter mile at best away from Capitol Hill.

McCabe: At One America, the rooftop shot of the dome, you’re literally right on top of the dome for those shots.

Leahy: Very interesting. The big news that’s come out is, oh, the first thing, Karen Jean-Pierre, perhaps absolutely the worst liar in America and the worst press secretary for a president in modern American history, she came out and said, well, they found this one document November 2nd.

And we’re just telling about it now. And that’s it. Oh, there’s a second set of documents, wait for it in a box in a garage next to Corvette, and then a couple of other documents surfaced. What do you make of all this stuff? Where does this go?

McCabe: When Trump left office, there was some question in Trump’s mind about whether he had won that election in 2020 or not. And a lot of that transition time was spent contesting and questioning and looking into things. And so there’s a phrase I use all the time, running and gunning.

There’s a lot of running and gunning as you run the country and you run the world, and you’re also contesting an election and an impeachment. There’s a lot going on. And so the idea that the GSA was supposed to pack up the President’s stuff, put it in a secure warehouse as they do for everybody, you know, these things never happen. However, Joseph R. Biden, Jr. knew, like in January of 2013 that he had four years to pack up his boxes.

McCabe: And when he said he wasn’t going to run for president after Hillary Clinton made a deal with Obama, he knew, hey, I got to start packing up my stuff. And then if you look at the charge that Garland gave Jack Smith, he says, I want you to look at everything, everything you could possibly do. I would argue it’s a violation.

Leahy: This was a special counsel investigating Trump.

McCabe: I would say that’s a violation of the Fourth Amendment ban on risks of assistance and open warrants, where you just sort of say that the royal officials were just allowed to look at everything until they found something. The Constitution says you can’t do that. With Robert Hur and these other investigations into Joe Biden it’s very specific and there’s no fishing expedition.

We’ll see how this plays out. But if Biden had that much time to plan his transition to private life and he also knew what he was going to be doing in private life, I think that the specific documents that he took with him are documents that, A, he did not want floating around. He didn’t want them in the public record or at the archives and/or two.

Second thing is, there was a document he needed as a reference for his own business dealings. And so who’s to say what happened? We’ll never find out. Jean-Pierre said we’re cooperating with counsel. But that’s like, the editor-in-chief of The Star News network telling one of his reporters or editors that he’s cooperating with his reporter. (Laughter)

Leahy: That’s very good. Carol Swain has a question for you.

Swain: Neil, do you believe anyone is digging into the anonymous Chinese donor that pretty much financed that center?

McCabe: No one’s digging into it, Carol, because they know exactly who it is.

Leahy: Oh, do you know who it is? There was, $40 million in anonymous donors, but there was one big one for $14 million.

Swain: What did he get in exchange for that?

McCabe: The Treasury Department has a record of every wire transfer that goes in and out, and everything that’s over a certain amount gets triggered. It’s one of those interesting records, whatever they call it. That’s if it’s over $10,000 something. If $40 million is coming in from China to the Penn Center, they know all about it.