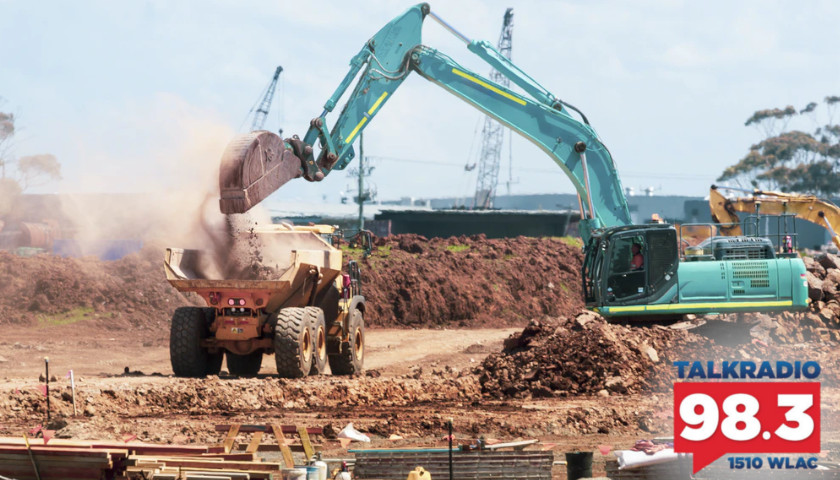 Live from Music Row Tuesday morning on The Tennessee Star Report with Michael Patrick Leahy – broadcast on Nashville’s Talk Radio 98.3 and 1510 WLAC weekdays from 5:00 a.m. to 8:00 a.m. – host Leahy welcomed Grassroots Director of Americans for Prosperity-Tennessee Grant Henry and Mayor Andy Ogles to the studio to discuss the current undefined infrastructure spending with a blank check.

Leahy: In studio with us right now is Grant Henry, the grassroots director for Americans for Prosperity of Tennessee. And he’s joining the mayor of Maury County, Andy Ogles. Good morning, Andy.

But it looks to me like the Senate Majority Leader Chuck Schumer is taking a page from Speaker Pelosi, who said in 2010 about the Obamacare bill: You have to pass it before you can learn what’s in it.

Henry: Yes. Isn’t that amazing? Let me explain where we are now. So federal officials have been pressed to speak on rising inflation after data was released earlier this week that showed the all items indexed increased five point four percent over the last 12 months.

The biggest spike since the 2008 financial crisis. That’s from The Tennessee Star Report of the headline of which Michael Patrick Leahy just read. Now, on top of all of that, you would think one of the reasons why we have this increased inflation going right now is the ridiculous amount of just printing pure money.

I get it. We’re in the era of a Fiat currency, but nevertheless, can we have some sense of rational approach?

Leahy: You used the term there – shows that you studied economics.

Henry: Just this much, though. (Chuckles)

Ogles: A little bit is more than most.

Leahy: For those listening, he put his fingers together and just showed about an inch or so. But I think it’s more than that, because of Fiat currency.

But with a Fiat currency, it is by Fiat. In other words, just make it up. Am I right?

Henry: Just make it up. It’s not based on anything more.

Leahy: And what does that lead to?

Henry: Once you see it.

Leahy: You had to take all your Deutschmarks in a wheelbarrow to buy a loaf of bread back then.

Henry: Once you see other rich people buying land instead of other things, that’s when you know you got a problem. But anyway, here’s the yahoo headline:

$3.5 Trillion Dollar Reconciliation Bill to Include the Proact Undoing State Right to Work Loss. So on top of all this ridiculous inflation we have going on, there’s been a new proposal: $3.5 trillion spending bill.

Leahy: Is it so-called infrastructure.

Leahy: Or is it the kitchen sink.

Henry: So it’s what Grover Norquist says. Infrastructure. It’s a French word for everything that means everything but roads and bridges.

Okay, that’s what infrastructure means. This part of the infrastructure spending, if you call it that, revises components of President Trump’s Tax Cuts and Jobs Act.

It increases taxes that would worsen our already devastated economy, hurting the working class. It implements elements of the Pro Act, which will remove right-to-work laws like here in Tennessee.

Leahy: Not only that, I particularly despise the Pro Act because they’re trying to do to the country what California did to the gig economy.

Leahy: Which is ridiculous, because, in essence, they’re outlawing a kind of employer-worker relationship called an independent contractor agreement.

That’s what they’re trying to do. Every Lyft driver, for instance, every Uber driver, they’re an independent contractor. And apparently, you can’t do that anymore in California.

They want to take how they ruined California, and they want to ruin the rest of the country. I’m not buying it.

Henry: No, I hear you. And it’s not just that. It’s gonna implement different elements of a Green New Deal. It will give the government more control over our health care, not to mention the trillions of dollars of unrelated, unnecessary, and ineffective government spending programs.

Now, here we are to where Michael Patrick Leahy said a second ago, remember the days of Nancy Pelosi telling us that we need to just pass the bill to see what’s in it?

That’s not any different than what we have anymore now. Now, I am not kidding y’all. When I say just yesterday, Chuck Schumer moved forward and intends to fill cloture to set up a procedural vote tomorrow or Thursday for a so-called bipartisan infrastructure framework bill on a bill that has not even been written yet – That is where we are. They’re going to move forward voting on a bill that has yet to be written.

Henry: I don’t know what it is.

Leahy: By the way, Andy, is that how they do it down in Maury County with blank pages?

Ogles: No, but I’ve got a house that I’d like to sell. Would you please just hand me a signed check, and then I’ll fill in the details later.

Henry: That’s exactly right. It looks like senators who argue that they shouldn’t vote on bills they haven’t read should be outraged right now that they’re being forced to vote on a bill that doesn’t even exist.

And look, one of the things we do at Americans for Prosperity is not just complaining about the current state of affairs, but we love to give y’all ways to take action.

Your House member and both the senators as well. It is the Senate side that we need to support on –  Notaroadsbill.com.  Sign that petition right now.

Send that ledger to your legislator. I would even say flood the voicemails. Flood these Senator switchboards right now. I have their numbers in front of me. If Michael Patrick Leahy would give me permission to say them.

Leahy: Oh, let me ask him. Yes, he has permission. (Laughs)

We need all the support we can get. And there are ways we can bring attention to this, like preserving federal infrastructure dollars for targeted construction projects of a national priority.

We can unleash private investment in infrastructure assets. We can return power and responsibility to the states wherever possible.

We can overhaul the regulatory and permitting system to modernize infrastructure reviews and reduced project costs. We can even eliminate costly and unfair labor restrictions.

But, what is going on right now? This asinine notion of spending $3.5 trillion dollars and pushing forward a bill for something that has yet to be written.

Leahy: Here’s one good thing about having Grant Henry in the studio. It doesn’t matter that we have bad coffee or stale coffee. He doesn’t need coffee. He comes in energized.

Ogles: I’ll tell you what. He’s fired up. I’m just like sitting here doing my phone.

Leahy: Feeling the energy. We got power coming from Grant Henry right now!

Leahy: He’s on a roll, brother!