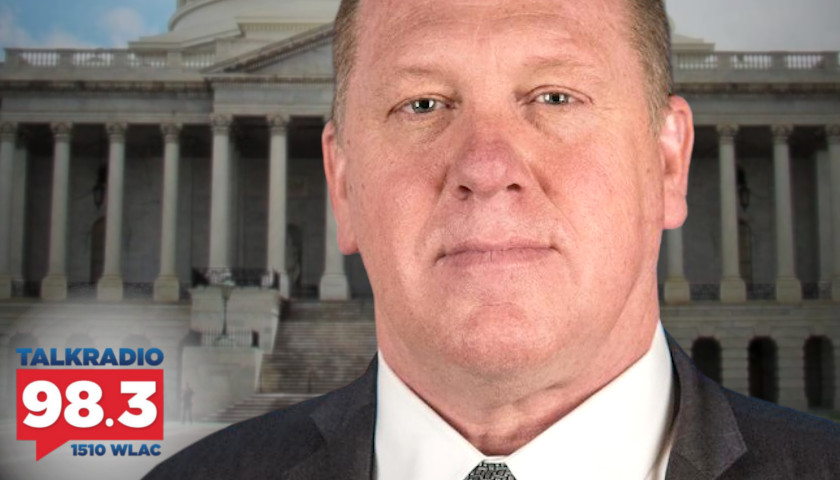 Live from Music Row Monday morning on The Tennessee Star Report with Michael Patrick Leahy – broadcast on Nashville’s Talk Radio 98.3 and 1510 WLAC weekdays from 5:00 a.m. to 8:00 a.m. – Leahy was joined on the line by author and former Acting Director of ICE Tom Homan who weighed in on the severity and legality of the actions being taken at America’s southern border immigration surge.

Leahy: Joined on our newsmaker line now, by fellow upstate New Yorker, Tom Homan, former acting director of the U.S. Immigration and Customs Enforcement. Tom, you were on FOX yesterday saying the border crisis is not incompetence. It’s by design from the Biden maladministration. Maladministration. My word, not yours. What do you say about that, Tom?

Homan: Well, I think it’s obvious. President Biden during the campaign made all these promises that he knew what cause a surge. that he was used vice President in 2014 and 2015 during the last surge, so he knows what causes the surge. I met the White House guys, and I met with the Deputy Secretary Mayorkas.

Leahy: You met with Mayorkas?

Leahy: So so tell me this about Mayorkas. Mayorkas strikes me as a zealot who does not want to enforce our laws instead wants to manipulate them to open borders. That’s my take. Am I right or wrong or a little bit off?

Homan: During 14 and 15 We did enforce laws. We built thousands of detention facilities that would help them use remove up when they were all removed. But under this administration, now that he’s Secretary threw a complete opposite. they’re not detaining people. They try to release them as soon as possible. They’re not letting ICE remove anybody. So they’re doing the complete opposite of what they know works.

Homan: Well, absolutely. He’s not enforced in while he cut the head off ICE. And he opened the board to illegal immigration. I think he facilitated illegal legalization by what he’s doing.

Leahy: What can we do to stop this terrible derogation of duty by the Biden Maladministration and Secretary Mayorkas?

Homan: I think Congress is at. I think the American people need to call you Congressman Senator, and demand the enforce laws are the books.

Leahy: What can Congress do to Tom? Because it’s controlled 222 by 210 by Democrats? Are there any border state Democrats in the House of Representatives who could switch and Act in a way to require Mayorkas and Biden administration to enforce our immigration laws?

Homan: Very few. You got Henry Quail in Texas, I think is tired of the open borders policy. His communities are raised in House, so I don’t think there’s enough. I think we’re in trouble until the ’22 election. I think America got you the elections as consequences, and we’re in trouble right now for next.

Leahy: Well, I know we’re in trouble. And look, I’m just pushing for this. You would need probably six or 7 Democrats to flip choir as one. I think you’re right. Politically, I don’t think there are enough Democrats who have the courage to flip if Congress won’t do anything. What can be done to stop this disastrous surge over the next year?

Homan: Doing what we’re currently doing. Suing administration. I’m the expert witness on the Texas lawsuit. I filed an APA Dave with a Florida lawsuit. So we got counter Republican Texas Attorney General Susan. And so far, we’re doing really well. So we’ll take them to court the same way they took President Trump the court every two weeks.

Leahy: So the Texas attorney general is suing the Biden administration for this open border policy. Where does that court case stand? And what can we expect to happen from that?

Homan: Well, they just one part, the 100 day moratorium the judge says they can’t do that now. We just follow lawsuit saying we don’t like the Ice priorities. They are to go back to Ice arrest people who are in the country legally. Florida is doing the same thing. They’re suing on the policies of Bite administration that are resulting in open borders situation we’re currently in.

There are several other States I can’t speak about right now because it’s in the process. So I think you’re going to see four or 5 States joining together, and they’re all Southern border States to Sue the Bite administration to make them enforce the laws of Congress and acting and not letting them ignore them.

Leahy: What is this country going to look like in October of 2022?

Homan: I think our borders will remain open. I think I see hundreds of thousands of genes across that border that are not going to be held accountable, but also on the flip side, I think the American people will have enough. I think you will see the Republicans take back Congress. I think people are now beginning to see what a bad policy the Biden administration has because, on the Southern border and other things such as oil refineries, I think the American people will finally get to see what President Trump said was going to happen during the election.

Leahy: Will the country be able to recover from this debacle?

Homan: We are a strong country, but it’s going to take a while. You can say there’s going to be hundreds of thousands of people in a country like that won’t be removed. And we have got to hope and pray they don’t get the Amnesty bill passed because that’s going to give Amnesty to almost a million illegal aliens that cross more than the last three years. In the same way, families that were arrested, released, order removed, and never left. I really have other than the States suing the federal government, I don’t have a lot of hope all fixes in the next two years.

Homan: Yes, it’s happened before. Where I’ve never seen time to Northern border, but I have seen them in ’14 and ’15. They formed other states to be processed because there the border is so overwhelmed. But on one hand, the Secretary of my orca says there’s not a crisis on a second again, people all over the country because they can’t handle the surge on the border. So I’ve seen it happen before. Not to the Northern border. But we’ve done it before. We moved around the middle of the U.S during ’14 to process. So it certainly makes sense to me. I have not verified it’s going to happen, but we did it back in ’15. I think you’re going to see happen again.

Leahy: Tom Homan, will you stick with us over the next couple of months and keep us updated on the progress of this litigation that you’re an expert witness on and let all of our listers know?. And, by the way, thanks for everything you’re doing from a media standpoint and on the ground.

Homan: I want to fight, and I’m going to fight for the right.

Leahy: Anybody from Watertown, New York iss a fighter that I know. Tom, thanks for joining us this morning.