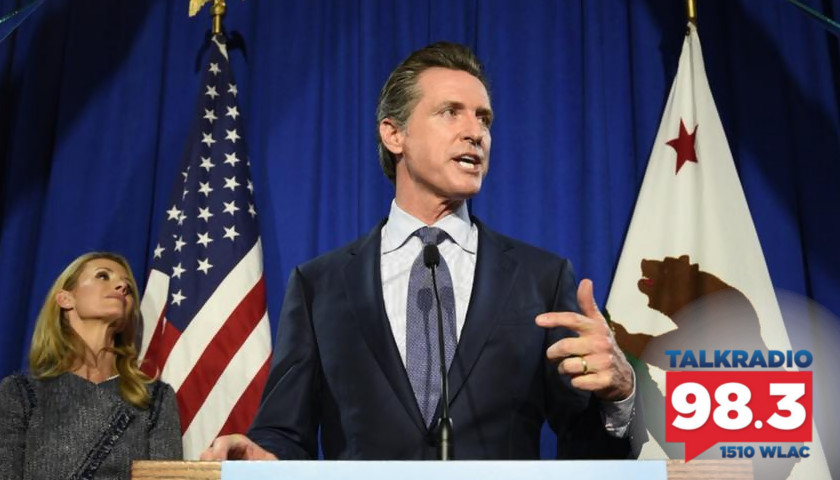 Live from Music Row Thursday morning on The Tennessee Star Report with Michael Patrick Leahy – broadcast on Nashville’s Talk Radio 98.3 and 1510 WLAC weekdays from 5:00 a.m. to 8:00 a.m. –  host Leahy welcomed creator of the Huey Report Craig Huey, in-studio to analyze the recall effort of Gavin Newsom and who his potential challengers might be in the fight for California governor.

Leahy: In studio with us, our good friend, Craig Huey. A California refugee, direct marketing expert, digital marketing expert. I love it when you’re on, Craig. I always learn something new. In this segment, we’re going to talk about the current status of the California recall.

Governor Gavin Newsom is being recalled. There will be an election. The last time they had one October of 2003, they did recall then-Governor Gray Davis. There are two questions on the ballot. The first question, should you recall the governor? Yes or no? 55 percent in 2003 said yes, recall Gray Davis.

Then the second question, if you vote to remove the governor, who do you pick? And last time, the highest vote getter is the governor. And in that case, it was 48 percent. It was Arnold Schwarzeneger. This time, Newsom, yes or no, that’s going to be very close to 50 percent. I think.

I want to hear what you think about that. And then about 30 people are on the list of opponents, one of whom is transgender Caitlyn Jenner. You were just out in California, what’s the word when this election is going to be and what’s it look like right now.

Leahy: Raising money at the French Laundry exclusive restaurant, I guess. But now to me, I don’t know this, but Gray Davis was a very grey governor. There was nothing compelling about him. Gavin Newsom is not Gray. Gavin Newsom is a compelling personality.

Leahy: He’s dramatic. I would say he’s a left-wing authoritarian and a hypocrite, but he’s a compelling speaker. I think.

Huey: He is smooth, almost too smooth.

Leahy: Too smooth, too cool for school.

Huey: Remember, he was a left-wing pro-socialist commentator on MSNBC. He is great on TV. He’s great in speaking. He’s great in mobilizing. But here’s the thing, he already has about $35 million in the kitty. He’s expected to raise $100 million of money is coming in over the nation because they want to save Gavin Newsom.

Leahy: And you tell me his marketing campaign so far is pretty effective.

Huey: Powerful. He has developed incredibly effective and professional videos, TV commercials, and digital marketing to be able to do several things. One, he’s legally attacking the recall and trying to stop it. Second, he’s trying to get people to take their name off the recall and spending a bundle of money advertising take your name off.

And then the third thing is he’s doing this anti-demonizing of the opposition with the Democrats always do. And then finally, he’s got these incredible commercials about how he’s about ready to send you $600.

Leahy: Literally bribing people to vote for him with California money.

Huey: It’s terrible. 70 percent of the Californians are going to get a check from Gavin Newsom before the recall.

Leahy: Legal corruption. That’s what the Democrats do. There are what, 30 candidates running?

Leahy: Okay, so you get to the first question. Let’s say you vote yes to recall or no. Even if you vote not recall, you get to vote for the next question. If Gavin Newsom is gone, who do I want as governor? 80 people running. Let’s say 50.1 percent of the voters in California say I want to recall Gavin Newsom. Then whoever has the most votes of those 80 or 90, then will be the winner. How many votes do they need to win?

Huey: Probably they need to have about 45, 48 percent just like Governor Arnold Schwarzenegger had.

Leahy: Who’s the leading contender now? Is it Caitlyn Jenner?

Huey: Well, yes, but let me tell you about several of the other candidates.

Leahy: We’ve got 30 seconds. I’ll tell you what we’re going to do with that. We’re going to hold on to that thought.

Leahy: And now we want to talk a little bit back to what we’re talking about earlier Craig, this recall election in California. It will happen when? In November?

Huey: Probably in November. And it hasn’t been set yet because there are still legal challenges by Governor Newsom to stop it. But it will happen.

Leahy: I don’t think those challenges will go.

Leahy: Or will succeed, but they’ll be on the ballot. He’s got a lot of money. He is aggressively campaigning, and he’s got some good ads. He’s clever. He presents well even though he’s a left-wing, lunatic, authoritarian hypocrite. (Laughs)

Leahy: But he presents well. But the way it works is two questions on the ballot, should the governor be recalled? Yes or no? And if it’s 50 percent plus one, he’s recalled.

Leahy: And whoever gets the most votes of those 80 or 90 people becomes governor.

Leahy: Last time around in 2003, Arnold Schwarzenegger got, like, 48 percent out of 10 candidates, and he was governor.

Leahy: 100 candidates? Okay. So this time around, can you handicap how the top five or six candidates who want to be governor? And the only one that really people know is Caitlin ‘transgender’ Jenner, right. Caitlin Trans-Jenner I guess you might say. Caitlin is running for governor. And, well, high name recognition kind of odd combination of transgender rights activism and conservative policies.

Leahy: It’s a weird California blend. When you say a California blend, most people think of coffee, everything, other kind of stuff being blended. (Huey laughs) Then you have this John Cox guy. John Cox ran against Newsom in the last election, was wiped out.

Leahy: He wasn’t a good candidate.

Huey: He was a terrible candidate, terrible organization.

Leahy: Nothing says Let’s run again for governor like being a terrible candidate with a terrible organization.

Huey: He’s looking in the fact he just he had enough votes and he has some name recognition. To me, he’s not a really viable candidate.

Leahy: He’s got some what’s his theme about a bear?

Huey: Because California’s the bear state so he got this live bear walking with him through the forest, which created a lot of buzz.

Huey: These commercials make no sense.

Huey: And then you got the Liberal Republican Mayor of San Diego.

Huey: His name’s Faulkner. And Kevin Falkner will have about five to ten million dollars. John Cox will have of about $5 million.

Leahy: How about Caitlyn?

Huey: Caitlyn Jenner, we don’t know how much you’ll have. She’s got the Kardashian fortune. She’s got lots of money. She’s got money that she could put into this campaign. But remember this, Gavin Newsom right now has about $30,000,000. and he will have $100,000,000. from all over the United States that the Governors Association and others have already given him.

Huey: And so this is going to be the focus the Democrat Party nationwide.

Leahy: Just looking at these motley crew of candidates. Jenner, Cox, Faulkner, none of them seem compelling to me. Is there anybody who is either a current candidate or a potential candidate who might have a chance of being considered a credible alternative to Gavin Newsom?

Huey: There’s a libertarian conservative supervisor from Riverside County. There’s a pastor who is well known in certain areas, but no one else has announced at this point. And there might be some people coming in that we don’t know.

Huey: Yes. They’re running against all kinds of weirdos.

Huey: Exactly. It is drama. And the TV commercials that Newsom is running right now are demonizing the recall supporters. He’s promoting the fact that he’s giving everybody $600. He’s reopened California. All this stuff.

He has distorted truth. He has destroyed the California economy. He has taken away individual liberties. People have had enough, but he’s bribing them with a check signed just before the election.

Leahy: Vote for me and you’ll keep getting these free checks. Now, if somebody were to wave a magic wand and say, Craig, here’s $50 million of legally available campaign funds and all you have to do is pick a candidate and then you have to put a campaign together to win.

Would you be able to find a candidate in California who would win? What would your strategy be with that $50 million? And who would you pick?

Huey: So great question. So first of all, think of this. The unions dominate California politics. The nurses union, the teachers union, and the SEIU. And they have a trained group of people to do ballot harvesting. The Republicans like here in Tennessee are behind the time.

They put together a marketing campaign to get people out to vote and to identify their voters. There is the ability it with $50 million to be able to defeat Newsom in California.

Leahy: So you think $50 million properly spent could beat him?

Huey: Oh, yeah. 100 percent. Now you don’t have to have more money than win. The falsehood that people live by is that if you have good policies, you’re going to win. No. The person who’s able to get the voters mobilized will win. And that could be a Republican.

Leahy: One guy comes to mind who hasn’t announced yet. Former Ambassador to Germany and the former Acting Director of National Intelligence, Ric Grenell. He’s a Californian.

Huey: He’s seriously considering it. He has a lot of support among Conservatives in California. He’s articulate, and he’s able to persuade people.

Leahy: How much could he raise?

Huey: I think he could raise more than any of the other candidates other than Caitlyn Jenner. I think he probably could raise about 10 to 15 million.

Huey: If he did the right strategies of getting out the vote. I should call up, Ric. I know, Ric. I should call him up and say, here’s, Craig Huey’s phone number. He can help you win.