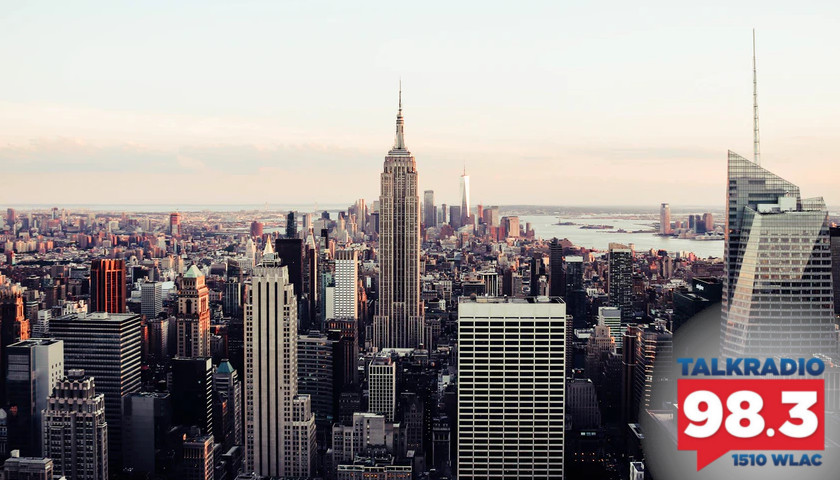 Leahy: Crom Carmichael, the story that broke last night in New York City, you’re gonna start smiling when I tell you this. Joel Pollak from Breitbart, my colleague. New York City’s Board of Elections, withdrew its latest vote count in the Democratic primary for mayor Tuesday evening after 135,000 test ballots were mistakenly included in a tally earlier in the day under the ranked-choice system.

Carmichael: How is that possible?

Leahy: How is that possible?

Carmichael: How is it possible that there might be voter fraud? My goodness.

Leahy: I wonder if he’s going to do an investigation of New York City. Now, Here’s what’s interest.

Carmichael: That is the natural next question. And it’s the only one that’s actually still a live issue.

Carmichael: So if he’s going to investigate any of them, it ought to be this one.

Leahy: By the way, you know who’s been hurt by this?

Leahy: The Black candidate, Eric Adams, who was leading in the first tally when they introduced these 135,000 bad test ballots that corrupted the system. His lead virtually disappeared. What does that sound like to you?

Carmichael: Might have. In other words, we don’t know that. That’s why we’re supposed to do an audit.

Leahy: So actually, the Associated Press in that, let me read their lead sentence. They’re lefties.

Leahy: Here’s what they said. They use the word corrupted. The Democratic primary, premier of New York City, was thrown into a state of confusion Tuesday when election officials retracted their latest report on the vote count after realizing it had been corrupted by test data never cleared from a computer system. That’s their words, not mine.

Carmichael: My goodness. This is going to be fascinating. Remind me and our listeners, of the Black guy who’s running. He was a former policeman, is that correct?

Carmichael: And the second place person is a wild leftist, is that correct?

Carmichael: So describe what’s the name of the alternative? Ranked voting is where nobody gets a majority?

Leahy: They eliminate the bottom person, and then they go to the second choice and add them to the vote. It’s a big mess.

Carmichael: And so in this case, the did you say they were 135,000 test balance that they did to test the integrity, this is great, the integrity of the voting process. And then they left them in there.

Leahy: They left them in there. And they reported the results yesterday. And then they said, whoops! We forgot to take those out.

Carmichael: We forgot to erase the test.

Leahy: And the Black guy went from a big lead to almost tied because of that.

Carmichael: Okay, so the election has not been overturned.

Carmichael: Are they going to be able to identify the 135,000 ballots specifically?

Leahy: I don’t know. I don’t see how they’re going to do it.

Carmichael: They can’t do an audit.

Leahy: That would be evil. (Laughs)

Carmichael: It would be evil to do an audit.

Leahy: But wait. But wait. There’s more Crom. I know this would surprise you, but President Trump weighed in on this about an hour ago.

Carmichael: What did he say? Let me read this state and then get your reaction.

“Just like in the 2020 presidential election, it was announced overnight in New York City that vast irregularities and mistakes were made, and that Eric Adams (he’s the Black guy) despite an almost insurmountable lead, may not win the race. The fact is, based on what has happened, nobody will ever know who really won. The presidential race was a scam and a hoax with numbers and results being found that are massive, shocking, and determinative. Watch the mess you’re about to see in New York City. It will go on forever. They should close the books and do it all over again the old-fashioned way when we had results that were accurate and meaningful.”

Leahy: If that’s happened, it’s recent. But he might have. I wouldn’t put it past him.

Leahy: That was from last week. Last week Merrick Garland, mercifully not on the Supreme Court, basically is suing the state of Georgia for passing an election integrity law that they’re claiming was intentionally designed to keep Black votes away. I don’t know how they see intent out of this.

Carmichael: They won’t be able to find that.

Leahy: But the audit of the absentee ballots, that review is proceeding under a few little complications, but we don’t know when it’s going to start, but it is scheduled to proceed.

Carmichael: And that’s in Georgia as well as in Maricopa County. Is that audit still ongoing?

Leahy: They’ve actually completed the audit. Now they’re writing the report from what I understand in Maricopa County. That report will come out in August. And so we’ll see what happens.

Leahy: They are the leader in election reform. So the next thing you are going to see is Merrick Garland sue them. What a shock.