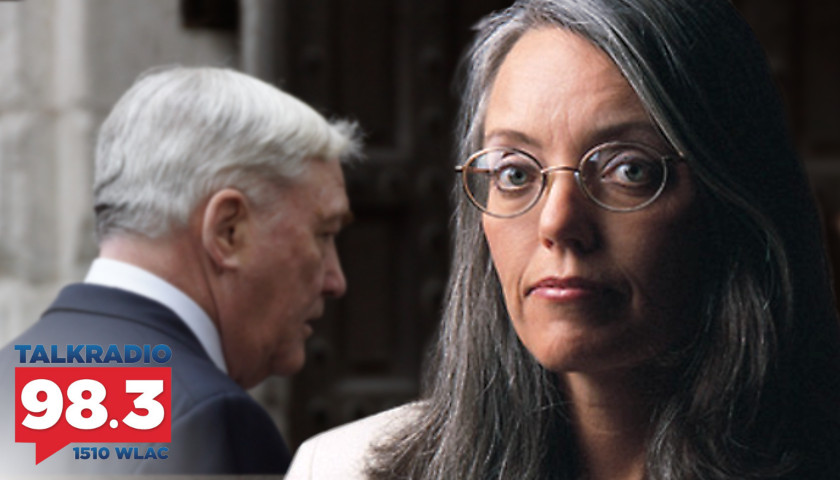 Live from Music Row Friday morning on The Tennessee Star Report with Michael Patrick Leahy – broadcast on Nashville’s Talk Radio 98.3 and 1510 WLAC weekdays from 5:00 a.m. to 8:00 a.m. –  host Leahy welcomed Editor and Publisher Rebecca Bynum of the New English Review Press in studio to touch on media mogul Conrad Black’s controversial past and her new book coming out in May entitled Stones of Contention by Timothy Ives which debates the findings of alleged ancient Indian sacred rock artifacts in the forests of New England.

Leahy: In studio, our good friend Rebecca Bynum, the CEO, Editor in Chief, and Publisher of the New English Review Press. We’re talking about this great new book, Dangerous God: A Defense Transcendent Truth, by Albert Norton Jr. coming out in May.

Leahy: Now, Conrad Black, a prolific writer journalist, a guy who has quite a story to tell. The author of a biography of Franklin Delano Roosevelt, gave you a back-checked blurb for this book by Albert Norton, Jr., A Dangerous God, A Defense of Transcendent Truth. Let me read the blurb from Conrad Black. ‘This is a refreshing reassertion of the unanswerability of the God argument without unnecessary elaboration or extra claims. And alerted but never recondite reminder that it is not so difficult to be sensible and morally confident without being unphilosophical or hidebound. An informative, often delightful read.’ Can you help me out here on the vocabulary front? Recondite. R-E-C-O-N-D-I-T-E. I don’t know what that means.

Leahy: I even got the pronunciation wrong. (Bynum chuckles) This is why you are the publisher of the New English Review Press. Recondite. Recondite is the word of the day.

Leahy: Yes. That is interesting. Conrad Black, he’s a fascinating character. I followed his career because he got started, and I think he came from a wealthy family in Montreal. My family history is from the 1840s my great great grandfather bought a farm in Hemingford, Quebec, in the Eastern Townships area just South of Montreal, North of the border with the states.

My dad was born on that farm in 1929. We still own three acres up there. And I go up there every other summer. So he got to start by buying some newspapers in the Eastern Townships. And so I read the biography of his story. And then he owned some newspapers.

Bynum: Oh yes. He The Daily Telegraph in England. He owned the Chicago Sun-Times. He owned a number of newspapers. He was really prolific newspaper owner.

Leahy: He had a business, I think it was called Hollinger International, the media company. And then he was prosecuted for something I never understood what the charges against him were, and he was convicted and spent five years in prison?

Bynum: He spent a number of years in prison. I’m not sure if it was quite that long, but it was a case of absolutely malicious prosecution. They went after him because he was a big fish. He was a prize for their trophy wall, and it was ridiculous. And they destroyed his company. It was a billion-dollar company completely.

It destroyed the company and all of the shareholders lost everything and all because somebody made some kind of complaint about some really trivial thing. I can’t remember exactly what it was, but it was ridiculous. It was absolutely ridiculous.

Leahy: He served a couple of years in prison. I don’t know exactly the time of it. But they went after him and they destroyed his media empire. He’s a very interesting fellow. And, you know, Conrad?

Bynum: Yes. I know him. I haven’t met him in person but I’ve corresponded with him a lot. And we publish his work on the New English Reboot blog.

Bynum: An absolutely excellent biography of Roosevelt. And he points out that Roosevelt was much more conservative than you would think, and that he really saved capitalism at that time.

Leahy: Yes. I think that’s his argument. I’m not sure I agree with that, but nonetheless, he’s a fascinating fellow. And does he have any additional work coming out that you know of?

Bynum: Not that I know of, but whatever it is, I want it for the New English Review Press. (Laughter) I’m trying to contact him.

Leahy: Conrad, if you’re listening, we are talking now with the New English Review press here in Nashville because Conrad, Nashville is now the center of conservative media in the United States. Tell us a little bit about some of the new books coming out in the rest of the year. You talked about this interesting land development issue up in New England.

Bynum: Up in New England, yes. So my next book will be one by Timothy Ives who’s an archaeologist working in New England. And a recent phenomenon has come about where old piles of stone up in New England that are just piles of rocks here and there in the forest. And the Indian tribes are claiming that these are sacred places of worship from the ancient Indians. But the historic record is quite clear. They’re old farms, and they’re just piles of stone where farmers have removed the stones from their fields. It’s very rocky there.

Leahy: Timothy Ives is the principal archaeologist at the Rhode Island Historical Preservation and Heritage Commission.

Leahy: This is a big debate over the origins of stone heaps commonly found in New England’s forested hills. It’s fascinating that that is a big issue of public debate.

Bynum: Isn’t it? It’s amazing. It’s this whole thing against colonialism, the settlers and in his claim is anti-colonialism. If that makes sense.

Leahy: It does make sense, actually. Does that book have a title yet?

Leahy: Oh, that’s a nice title. Stones of Contention. Now, it seems like an obscure topic, but it’s quite interesting for those of us who are interested in history and archaeology. Rebecca Bynum, what a pleasure it always is to have you here in studio. What an interesting conversation.