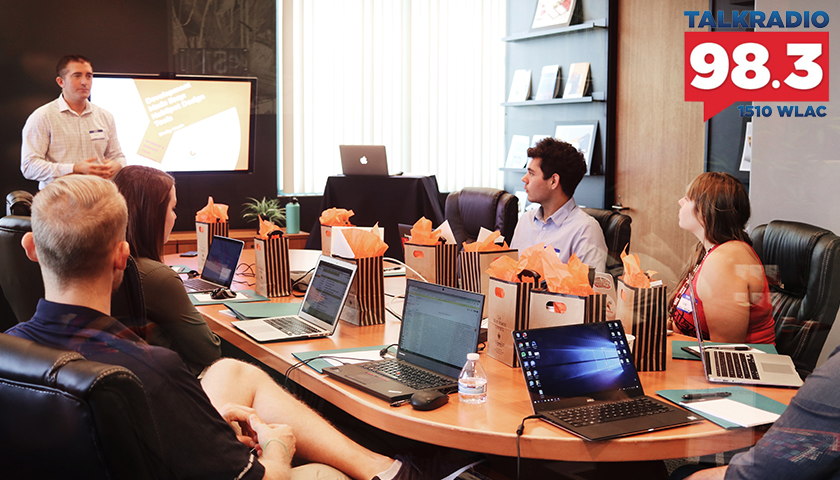 Live from Music Row Monday morning on The Tennessee Star Report with Michael Patrick Leahy – broadcast on Nashville’s Talk Radio 98.3 and 1510 WLAC weekdays from 5:00 a.m. to 8:00 a.m. – host Leahy welcomed the executive director of 2nd Vote, Amy Wilhite in studio to talk about how 2ndvote.com was created, what motivated it, and how they rate companies.

Leahy: It’s great to have you back here in studio. It’s been a very interesting time for 2nd Vote, hasn’t it?

Wilhite: Yes. It really has been. We’ve been around since 2012. And Dr. Black, our founder, saw this coming years ago with all this woke corporate capitalism.

And he said before, I wish we didn’t exist. I wish we didn’t need to exist. But we do. And we’re here for people so that they can look at these companies that are funneling money to the left, and try to shop their values.

Leahy: All over the place. We have your affiliated company, 2nd Vote Advisers. 2nd Voe Advisers. Dan Grant runs that operation.

2nd Vote Advisers use the ratings that you have in developing their money management portfolio. And they also have exchange-traded funds.

Wilhite: That’s right. We’re glad that they’re able to use our research. We license it to them so that they can come up with their scores and on that side of things. And then they also have another group that handles the financial part.

And they just put the packages both together. And it comes up for a great product. And they’re doing really well now for our listeners.

Leahy: Just to remind them, a 2nd Vote is on the web at 2ndvote.com. Just remind our listeners what the mission of 2nd Vote is.

Wilhite: Yes. We started back in 2012 by Dr. Black and Congressman Diane Black, because they are at a grocery store shopping, and they donated some money to an organization. And when they were walking to the parking lot, Congressman Black said, why did you do that?

Why did you do that, Dave? And he said, why wouldn’t I do that? And she said because that organization funnels money to Planned Parenthood. So he thought, wow, I didn’t know that. How come I didn’t know that? Who else is doing this?

He got some researchers together and studied what some other companies were doing and was just floored by where the monies were going. So that’s how 2nd Vote was created. We want to research and educate consumers so that they can align their dollars with their values.

Leahy: You rate on a one to five scale, whether or not publicly traded companies are neutral, far left, or right.

Leahy: And how many companies do you rate?

Leahy: And three point zero is what you’re shooting for, right?

But the goal is for corporations to stay neutral and get to the neutral point. Corporations used to, you didn’t really know where they were giving their money.

Leahy: This would be about 30 years ago.

Wilhite: Yes. You knew that when you were going to go get a coffee that, you know what? You’re getting a good cup of coffee and good service and all those kinds of things. You didn’t know where they were giving their charitable dollars.

And they need to quit being so divisive. I’ve seen some – you’ve talked about the NFL. I heard you talking about the Olympics a little bit. What happened to just watching a football game and watching the players stand up?

Wilhite: The good old days and what things stood for. You went to a baseball game and you knew it was all good. But now you got to worry about people kneeling or what they’re supporting outside of that.

Just get back to giving a good quality product, good customer service. If you’re a sporting event, let’s just have a great day. Stand up for the flag, sing the song, and just be happy.

Leahy: So here’s the thing. You mentioned coffee, which is a big theme of this program since we start at five o’clock. I’m about to pour you a cup of coffee that I made.

Leahy: So we’ll see. And it was a company called Broast TN out of Cookeville who provided us with one of their brands called Happy Camper. I’ve already tasted it. And I’ve given my review. You can give a review after we pour you a cup of coffee.

That’s going to be, by the way, the new standard of treatment for in-studio guests. They all get a cup of coffee and we’ll test different ones throughout.

Wilhite: Great. And we’ll have to score them as well.

Oh, my goodness. It’s a one point seven, not so good. Seattle’s Best Coffee one point one seven. But there is actually a three point zero coffee company. Dutch Brothers Coffee. How about that? But this is the problem, isn’t it?

Wilhite: It is. And really, we’re trying to avoid interjecting politics into all of our consumer purchases. But the companies are forcing us to be political.

And your tool allows everybody listening – you can go to 2ndvote.com if you like coffee and you want a company that’s not politically correct. Dutch Brothers Coffee. Looks like they would be right at the top of the list.