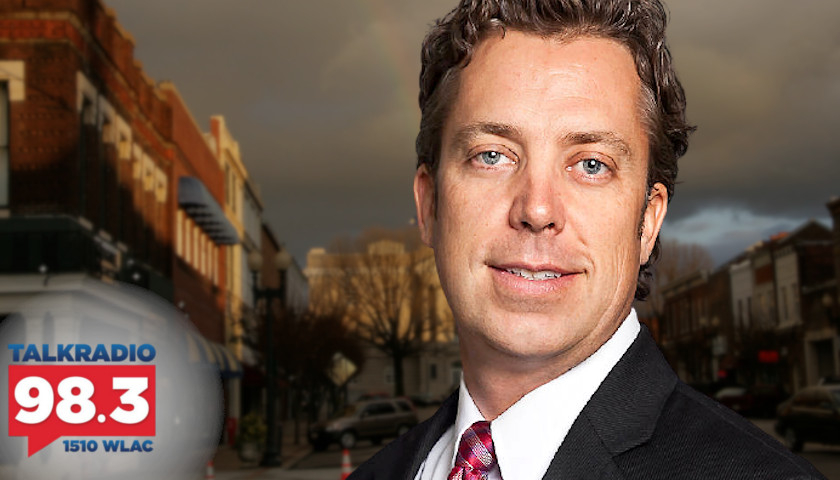 Leahy: In studio with us our good friend Mayor of Maury County Andy Ogles. You know, Andy, we were talking off the break we’re probably going to be adding a live video streaming portion to the program. And you come in here at 6:00 a.m. in the morning. You’re dressed very professionally. You look like you could argue a case before the Supreme Court right now. (Ogles chuckles) Me, I’m bleary-eyed and need a shave. I’m a wreck. When we have the live streaming people will be able to see that contrast. It will probably get you re-elected Maury County Mayor.

Ogles: This is one of those days. I’ve got a crazy day. So obviously my morning starts here and I’ve got to turn around and drive back to Maury County because we have an organizational meeting for Mule Day. As soon as that’s over I’ve got to hop in the car drive up to the legislature because I have been asked to testify.

Ogles: Do that. Then turn around go back to Maury County for meetings. And then I have to go to Franklin. And I’m speaking this evening to several conservative groups. And so it’s the bouncing around all over the Middle Tennessee area. And there’s just no downtime. It’s like I had to hit the ground and be ready to roll.

Leahy: I’ll get back to the issue of your testimony before the state legislature in a bit. I want to go back to Mule Days. Now in terms of a community event I just think Mule Days is such a great concept because who wouldn’t want to go to a Mule Days event because it’s celebrating mules. It’s agricultural but I guess there are other places in the country that celebrate mules and that have Mule Days. But to my mind, the premier Mule Day event is in Colombia. Tell us the history of it. How did this come about?

Ogles: One, we have to acknowledge the fact that some of your listeners some of our friends from New York or California have no idea what we’re talking about. (Leahy laughs) So we’ll probably just start there.

Leahy: For the new people who have come into Tennessee from California, and there are a lot of them…

Ogles: There is a lot.

Ogles: You have horses you have donkeys you have mules. But the Mule Day celebrations that take place all over the country really it’s a throwback to your agrarian society and your livestock auctions that would take place literally on your town square. And so in Maury County, Columbia was the mule capital of the world. So during the first world war hundreds of thousands of mules were used during the war effort.

Leahy: During World War I.

Leahy: To transport goods and services. Mules being a great pack animal.

Leahy: And known for their strength persistence and stubbornness.

Ogles: And stubbornness. That’s right. (Leahy chuckles) And so Maury County as being the mule capital of the world our livestock auction kicked off those sales across the country. So everybody would come to ours and then each week thereafter there would be these auctions for various parts of the country. And so there’s this tradition to have it in late March-early April, you’ll have Mule Day.

Leahy: Which started off the farming season shall we say. Let me just step back even further. How is it that Columbia, Tennessee became the mule capital of America? How did that happen?

Ogles: How that exactly happened, I have no idea other than the fact that we just had a lot of mules.

Leahy: Had a lot of mules around.

Ogles: We had an entrepreneur that began the marketplace and just kind of the rest is history. So we’ve continued to honor that tradition. It brings in a lot of revenue and a lot of tourism to Maury County.

Leahy: Now let’s just stop for a moment. To a modern Californian or a modern New Yorker just coming to Tennessee, they would say mule days?

Ogles: Going back in time because of the auctions of the sales and the economy that is generated. In modern times you have the people and they come into town, they stay at the hotels, they eat at the restaurants, they buy souvenirs etc. But you really have two types of activities that take place during your traditional Mule Day. You’ll have the parade and the things that take place in downtown Columbia and then out at the Agriculture Park, you’ll have the again agricultural stuff that takes place.

Leahy: Just for those of our listeners, here’s an overview from the visit Columbia, Tennessee website. Mule Day is an annual celebration of all things related to mules held in Columbia, Tennessee the mule capital of the world. It began in 1840 as a Breeders Day a meeting for mule breeders and now attracts over 100,000 people taking place over four days. There you go. The old days way back. So it’s rooted in the agricultural economy here, which makes an awful lot of sense to me.

Ogles: Again going back to 1840 and so when they decided to cancel it I’ve been fairly stubborn through this process.

Leahy: Now, there’s a line I could use Andy. But I’m not going to use it. (Laughs)

Ogles: No, I’ve just refused to do the mask mandate. We have this thing called the Constitution and I support it and I protect your right to wear a mask and I protect your right not to because you can social distance and you can do other things to protect yourself and others. And the same thing here with our activities, when all the other counties and states were canceling their fairs back in last this past summer I refused to cancel ours because  I was convinced there was a way to do it and do it safely.

Leahy: So come on down. I’m coming to it and the fireworks, I love Fireworks. Is there any kind of COVID constraint on fireworks? I didn’t know about it, but maybe there is well.

Ogles: I’m sure if you are Nancy Pelosi sure, that’s a condition of the constraint of anything that has to do with freedom. No, not at all. Especially not Maury County.

Leahy: Well that makes an awful lot of sense to me. So instead of March-April in the more traditional Mule Day event, there will be a Memorial Day event in Columbia and it will combine a very well-known musical performer.

Leahy: Can I get you to say. You won’t say it yet.

Ogles: Once I have their press release and it’s approved, it’s going to be fun. It’s Memorial Day weekend. It’s a time to celebrate our heritage. It’s also time to remember those who have fallen serving our country, Memorial Day. Which again is why I want to layer in some fireworks. There’s a budget involved and I’ve got to get sponsors and raise those funds and etc.

Leahy: Where will this concert be?

Leahy: Right downtown on the square?

Ogles: It’s just one block off the square. We have a giant parking lot so we can get a big crowd there.

Leahy: I will say this, the square in Colombia is really quite a nice place to visit.

Ogles: Obviously I’m biased because I’m the mayor there. There are two or three squares in this state and really in the South that are arguably the most beautiful and ours is one of them.

Ogles: I’m a very pragmatic practical person. If I say look, it’s the third prettiest because we are in the top three. And of course, I’m biased and I’d say we are the prettiest. Especially if you look in the contrast of what we have going on, it’s booming.