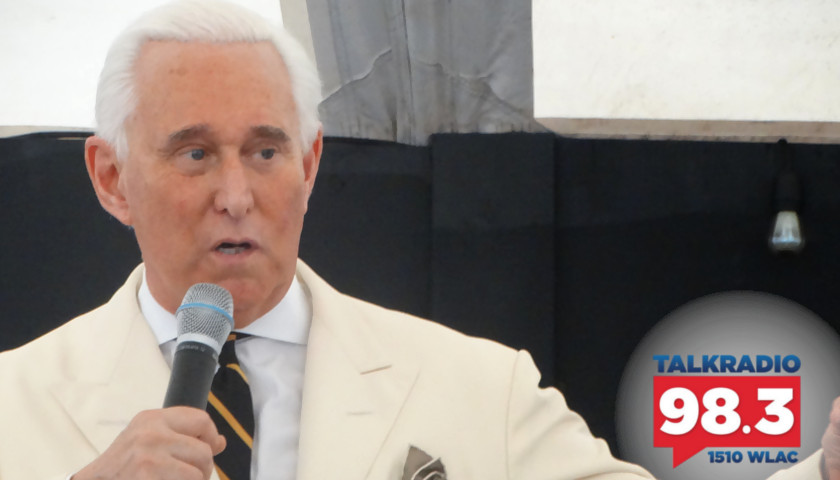 Leahy: We are joined on our newspaper line by Roger Stone. Roger is perhaps the most colorful political consultant in modern American history. Roger, welcome to The Tennessee Star Report.

Stone: Delighted to be back with you.

Leahy: Well, how are you doing by the way? First, you’ve had this crazy couple of years. You were convicted of seven felony counts having to do with it seemed, made up to me, of witness tampering, et cetera, in connection to the Mueller special counsel investigation.

Then your sentence was commuted and pardoned by the president. And then you’ve had a very fascinating couple of years. How are you doing physically and mentally?

Stone: I’m doing fine. It’s kind of ironic that on election night, November 20, Robert Mueller was forced by court order to release the last remaining unredacted section of his report, which had been withheld from me at trial, admitting that they had never found any evidence whatsoever against me regarding Russian collusion, WikiLeaks collaboration, John Podesta’s emails, or any other illegal act. So in other words, I was framed.

Leahy: Well, that was my sense of it all along Roger. There’s a story in Newsweek I want to get your reaction to published just a couple of days ago.

As federal authorities probe into Roger Stone and ally, a former President Donald Trump and a recipient of his presidential pardon over possible involvement in the deadly January 6 riots at the capital footage of Stone galvanizing Trump supporters to the incident may offer some clues according to Harry Littman.

Harry Littman, former U.S. attorney, and deputy assistant. The Department of Justice is currently investigating Stone’s role in the attack. What do you say about that?

Stone: Well, first of all, it’s a total recycle. The video in question, which, by the way, proves absolutely nothing other than the fact that a lot of people love Roger Stone and I love them. A lot of Patriots coming up to me and say hello.

A gentleman says to me, how are we going to do today? And I say, we shall see now. Now there was a legislative preceding that day and the world was hanging on the outcome. So this video proves nothing.

By the way, Newsweek is not the Newsweek we remember as a news magazine decades ago. They went out of business and sold their logo and trademark to The Daily Beast. So this is recycled garbage. It is categorically false.

I know nothing whatsoever about the illegal acts of January sixth. I wasn’t involved. I didn’t know about it in advance. I learned about it when every American did. But this is the kind of smear I’ve had to put up with since the president pardoned me.

And frankly, before. It’s kind of driven by the blood lust of the far left who can’t get over the fact that I’m not already in prison or dying in prison of COVID-19.

Leahy: Isn’t that what they want?

Stone: Yeah, I think so. I think it has to do with beating them in multiple elections. It also has a lot to do with the fact that the special counsel, Robert Mueller, pressured me relentlessly to bear false witness against the president.

He wanted me to lie. They were willing to “go easy on me” if I would just tell them what they wanted to hear. And I didn’t do that. Through the Grace of God, the president had the courage and the strength to give me an unconditional pardon. And the hard left in America just can’t get over it.

Stone: Let me tell you the bad news and the good. My wife of 30 years was diagnosed with stage four Lymphoma cancer, which has spread to her lungs. She’s putting up a spirited battle against it, both spiritually and medically.

First, they break you and then they squeeze you. You can go to stonefamilyfund.com if you want to help us.

Stone: Yes. Absolutely. Because even these alternative and holistic cancer treatments are extraordinarily expensive. And then I’m writing another book. I’ve written five. I’m on The New York Times best-selling author list.

And my next book is entitled Roger Stone Did Nothing Wrong: My Political Persecution and the Loss of the 2020 Election. So I’m trying to get that done by September and out the door. Truth is the antidote to liberal lies.

And I want to get this story on the record because, as you know, I was gagged unconstitutionally before and during my trial. And even after my trial, I was not allowed to defend myself in any public forum.

In fact, I wasn’t allowed to say anything. If I went to Nashville and had the best barbecue ribs my life and I posted that online, I would have been arrested immediately under her decree.

Leahy: Roger, who is your publisher?

Stone: I have always been published by Skyhorse, and I will probably do this book with them again. My very first book, The Man Who Killed Kennedy: The Case Against LBJ, was a Sky horse book.

It’s a New York Times bestseller. I could go elsewhere. Once you’ve written a couple of books, you have a little more latitude. But I’ve had a pretty good relationship with this particular house.

Leahy: Well, good, good. We certainly wish your wife the very, very best. What’s your daily life like now? Are you living in Florida? What’s your routine?

Stone: We live in Florida, which is, I think, where the freedom is going to have its last stand. It’s amazing that Sean Hannity, Mark Levin, Tucker Carlson, and I think Alex Jones assuredly have all either moved here are in the process of moving here.

We have a great governor, DeSantis, a strong supporter of the Second Amendment. He’s very strong on the COVID-19 lockdown nonsense, election law reform, and Internet censorship.

He’s even a true conservative leader. My daily experiences are waking up in the morning and making breakfast for my wife. Then I try to put in at least four hours a day on my book.

I have to record two 10 minute segments of a 20-minute show called Get Stoned. Your Daily Fix on Politics, which appears in Stonecoldtruth.com beginning July first it will be on multiple platforms as well. That’s more than enough to keep me busy. And, of course, I say the Rosary every day.

Leahy: Are you still doing your weight lifting?

Stone: I get to the gym three times a week now. I was going every day, but now with my wife’s situation, it’s a time question. I had to take her to the University of Miami to consult a new doctor yesterday.

We’re very hopeful she can beat this cancer. It’s a spiritual battle. It has a lot to do with attitude and determination. But she’s hanging in there. And I guess this is a great place to thank the many people in Tennessee who are praying for us. The public outpouring of support has really been heartening.

Leahy: So in terms of your wife, her situation, and her health issues, you say her attitude is good. But there must be some days a little bit rough.

Stone: We’ve been through a tumultuous two years. We have been hunted, vilified, smeared gagged, de-platformed, framed and gagged, which is the worst. Not allowed to defend yourself and bankrupted. I mean, I literally own nothing at this point.

We lost our home, my car, our savings, and most of our insurance. So we’re in the rebuilding phase. This happened very suddenly. My wife was just diagnosed less than two weeks ago, and we’re still sorting out the proper course of treatment for her.

I’m a great believer in holistic and homeopathic medicine, also in Eastern medicine. I’ve been getting treated prophylactically with acupuncture for 40 years, and I’m still in pretty good health. I’m almost 70, although I know I only look 45.

Leahy: You only look 45. Roger Stone. The website to help out is stonefamilyfund.com. Roger, we wish you and your wife the very best of luck.

Stone: God bless you. And thanks for having me on this morning. I really appreciate it.

Leahy: We’re glad to have you on, Roger. Good luck to you.