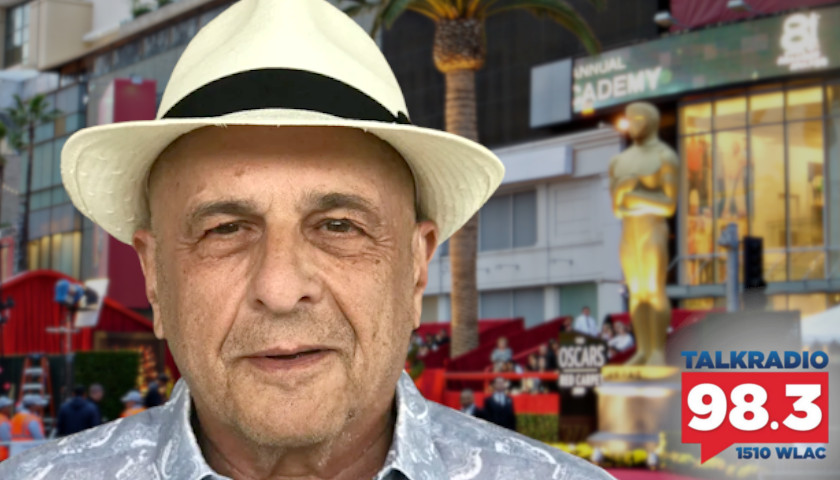 Live from Music Row Thursday morning on The Tennessee Star Report with Michael Patrick Leahy – broadcast on Nashville’s Talk Radio 98.3 and 1510 WLAC weekdays from 5:00 a.m. to 8:00 a.m. – host Leahy welcomed all-star panelist and The Epoch Times Editor-at-Large Roger Simon in-studio to talk about voting for the Academy Awards, the art of screenwriting, and how Hollywood moguls made America.

Simon: Okay. It’s two-tiered. According to the branch that you’re on, I’m in the writer’s branch. There’s obviously the actors’ branch, directors, etc. You nominate in your own branch, plus Best Picture.

So in the case of writers, we get to nominate Best Picture, Best Adapted Screenplay and Best Original Screenplay. So I voted in those three categories.

Leahy: Those are the only three you get to vote in?

Simon: Now. Whence the nominations are made, I will vote in all categories.

Leahy: So you get to make a nomination. Tier one. Who you get to nominate. Now is this, like top secret stuff?

Simon: They swear you to secrecy. Not on the Bible. There are too many atheists.

Simon: However, I have increasingly been bored voting and seeing fewer of the pictures and I know that the few people who are conservatives that I know are members of the Academy feel the same way. There’s nothing to vote for, really.

And we don’t even want to watch. But nowadays it’s very easy to watch for Academy members because, for the first time, they have a place online where you can go put your password in and click on any movie of the year that you want to see.

Leahy: That would be fun for me if there were actually decent movies.

Simon: The best things to watch nowadays are the docs.

Simon: Yes. The one on Brian Wilson was really interesting.

Leahy: Yes. And that’s not our friend or radio host in town.

Simon: The Beach Boys. He was kind of a genius. A genius.  We can take the kind out of it.

Simon: Yeah, it is in the documentary, of course. So it makes it a fascinating viewing. And also there was a one on Cousteau that’s very interesting. Jacques Cousteau, the inventor of scubas. And one on Ben Funtores who is best known…

Leahy: Who is Ben Fong-Torres?

Simon: He was someone that I have known personally because back in the old days, my original detective novels were published by Rolling Stone.

Leahy: A long time ago, Roger. Sorry for saying that. (Chuckles)

Simon: Let’s not get into that. They had a publishing wing name called Straight Arrow Books at that time and their two biggest authors were me and Hunter S. Thompson.

Simon: Ben Fong-Torres was their lead reporter, and he was great. He was the guy who interviewed all the Bob Dylan’s of the world and with extensive and really interesting reports in a time when that music was really important.

Nowadays, who cares about pop music, unfortunately. But then it was extremely important. So the documentary on Ben Fong-Torres, which I think very few people will see, is really good.

As for the fictional films, the ones that I voted on for their screenplays, I’ll give a hint because who cares about their privacy? (Chuckles) Anyway, my hint is that I voted for two films about sports.

Leahy: Okay, very good. That’s enough. Now here’s what I don’t understand. Maybe you can tell us. You can help us with this. How do you know if a written screenplay is good?

Simon: Okay, of course it doesn’t. It includes everything. Because if you write a screenplay, you’re writing what the camera is looking at.

Leahy: So let’s just say I’ve seen some of these things. I think probably out there in our listening audience, there are a lot of people who have gone to the bookstore and picked up the book, How to Write a Screenplay.

Leahy: But in it, it would say opening scene, the camera pans across the field. Is that right?

Simon: You began with something, Samaturish?

Leahy: Of course! I’ll tell you what. I take no offense.

Simon: I don’t do it that much anymore. But here’s what a screenplay has to do. It has to grab the reader like a novel.

Leahy: How do you do that?

Simon: You tell it more or less like a novel, but you think in your head there’s a structure to it, but you can learn the structure.

Leahy: What’s the first page of the screen look like when you write it.

Simon: Like the 10th page? What’s the first page of a novel look like? The 10th page. If you’re writing a good novel, you attempt to really grab your reader. It was the best of times and the worst of times.

Simon: One of the famous lines in history.

Leahy: And the other line on the other extreme, it was a dark and stormy night.

Simon: Not bad. But you have to learn the formatting, which takes an hour if you pay attention, and you have to be a good storyteller. And here’s the real truth of movies.

The most important thing about the movies is the screenplay. The old line in Hollywood was in the days that made great movies, if it ain’t on the page, it ain’t on the stage.

Simon: And that was what the old moguls used to say. And when the moguls were around, movies like Casablanca were the ones that were made. Have you seen anything like that lately?

Simon: Yes. They made America. Hollywood in the old days was the sign of America to the world. Now they are speaking of your previous hour, which they do, Hollywood is essentially owned by China.

Leahy: It really is. That’s why you have all these superheroes.

Simon: They are essentially approving the scripts.

Simon: How boring is that? Besides being all the bad things you can say politically about that etc., it’s really boring.

Leahy: Let me just kind of flip a little bit here to this. Our pals at The Daily Wire here in town. Ben Shapiro’s group and they’ve moved here.

Simon: So is The Epoch Times. The Epoch Times is doing a better job. I don’t want to be in local but they have studios. They’re really going in New York.

Leahy: So what are they doing? Are you writing any films for them?

Simon: No, because I’m too busy. I write four columns a week and a book, as we know last week.

Leahy: The Southbound Train about all of the Californians and others coming to Tennessee.

Simon: And including, I would imagine candidates.

Leahy: Oh, and by the way this Fifth Congressional District primary race with arriving from California in 2019. Robby Starbuck didn’t vote in any Tennessee primaries.

Simon: He came on his own southbound train. He will definitely be in the book.

Simon: On a rocketship.

Simon: On Air Force One.

Simon: She’s on Fox all the time and I was watching yesterday. She was really good in terms of she knows her foreign affairs as well as any congressional candidate.

Leahy: We’ll see if the 749,999 people who’ve lived in this district longer than she has will have any comment.

Simon: This is something people have to weigh.