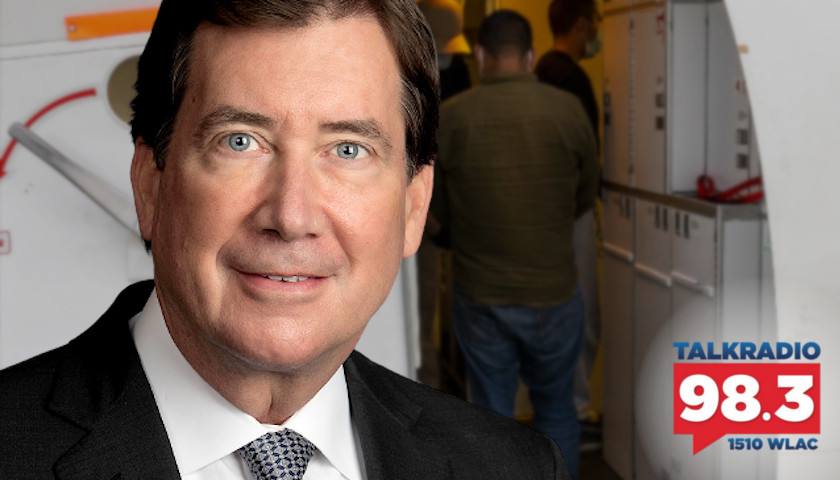 Live from Music Row Thursday morning on The Tennessee Star Report with Michael Patrick Leahy – broadcast on Nashville’s Talk Radio 98.3 and 1510 WLAC weekdays from 5:00 a.m. to 8:00 a.m. –  host Leahy welcomed TN (R) U.S. Senator Bill Hagerty to the newsmakers line to weigh in on the illegal immigrant minors being flown into Chattanooga, Tennessee, and his proposed legislation to prevent this from continuing.

Leahy: We are joined now on our newsmaker line by United States senator from Tennessee, Bill Hagerty. Senator Hagerty, welcome back.

Hagerty: Great to be back with you. Thanks.

We’ve got to ensure that Biden administration is transparent with us, that Secretary of HHS, and the Secretary of Homeland Security consult with state and state local officials or any jurisdiction that’s going to be impacted by something like this.

And what they’re doing right now is flying these folks in under the cover of darkness. fAnd they’ve got to be able to tell us exactly how many people they intend to bring in to transport or relocate. Are these people being tested?

Do they have COVID or other health crises or illnesses? How many people because our schools, our hospitals, our law enforcement are going to have to deal with all of this. Our schools are going to be overwhelmed by what could be happening.

So we have an incredibly important right to know. And for them to be behaving in this manner is doing exactly what you’re not talked about before Michael. They’re turning every town in America into a border town.

Leahy: Senator Hagerty, I don’t know if you saw this. So Peter Ducey of Fox News was at a press conference yesterday with Jen Psaki, the press Secretary of President Biden, and he asked, well, the governor said we don’t want them in Tennessee.

And she said, well, they’re really just passing through. Passing through at 1:30 a.m. I don’t know. That doesn’t seem very credible to me or transparent.

Hagerty: It doesn’t. It doesn’t to me. And if you hold on a second, Michael, I’m going to read you a text that one of my friends sent me just the other day. He was flying on a commercial flight from Dallas to Chattanooga.

This is not the fourth that was filmed in Chattanooga by the news station there. This is a different flight. But my friend said there were eight to 10 young unaccompanied minors. Let me just read you what he texted me when he saw it.

Leahy: That’s where you go. That’s not exactly passing through, is it Senator Hagerty?

Hagerty: It’s not exactly passing through. And we’ve been hearing rumor after rumor about this Temple dormitory facility there that know that’s been rented. It’s being set up. They’re running advertisements for bilingual people.

It certainly seems that that is a location where they’re housing these folks. And they’re not being transparent whatsoever with the local community or with Governor Lee, obviously. And we have demanded the right to know what’s happening.

Leahy: Senator Hagerty, what’s going to happen with your legislation? What committee does it go before? And what are the odds of passing?

Hagerty: We’re pushing it through right now. Again, its committees with jurisdiction over Homeland Security and HHS. I think there are a lot of senators that are concerned about this. Tennessee is the first to uncover it.

But the crisis is one that the Biden administration has caused because they caused our borders to collapse. This is going to put more pressure on them and I intend to put a tremendous amount of pressure on them to address the border situation.

Now, you know, we talked about this. I flew down to Guatemala and Mexico City just a couple of weeks ago to meet with the President of Guatemala, to meet with a foreign Minister in Mexico.

I met with a foreign Economic Minister to let them know this is a matter of utmost urgency to us. The Senate controls the power of the purse here in the United States of America. And I let them know loud and clear that we need this border crisis fixed now.

We need it fixed urgently because what it’s doing is not only increasing the flow of these migrant children, other migrant adults across the border. But it’s increasing illicit drug trafficking in Tennessee.

You talk to any sheriff, they’ll tell you that overdoses are up. Death from fentanyl is up since the borders collapse. We’ve got human trafficking in our state. This is precipitating crime throughout America, and we’ve got to bring it to an end.

Leahy: But Senator Haggerty, the President to Biden has said that Vice President Kamala Harris is right on the job. She’s been doing it for more than 45 days, I guess, is in charge of solving the border crisis. Has she done has she gone to any of these countries? Has she gone to the border? I don’t think so.

Hagerty: She’s scheduled to follow my footsteps next month.

Hagerty: I am a full month ahead of her. And I led the very first official delegation from the United States Senate since the Pandemic shut everything down. I don’t know why the White House has not been able to have a greater sense of urgency.

Hagerty: I think your hypothesis has a high probability of being correct.

Hagerty: Schumer is going to be under pressure from his members. Think about Mark Kelly, who’s in Arizona. He’s going to be up this cycle. He’s already criticized President Biden for his treatment of the border situation.

We need to make more and more senators understand that just like Chattanooga towns and their jurisdictions are going to turn into a border town too. They’re going to be overwhelmed the same way we are. Does their school have the capacity?

Do their hospitals have the capacity or will they be overwhelmed again? Law enforcement certainly wants to know what’s happening on a local basis. So everyone is going to be affected across the nation.

I predicted this when Biden let the border-collapse. We’ve got to go back to the policies that we’re working under the Trump administration. We’ve got to secure our border first, and then we can look at the longer term, the medium-term issues that are causing problems in those countries. But we cannot deal with that as long as this border is open.

Leahy: Have you asked Democrat Senator Mark Kelly from Arizona, to co-sponsor your bill?

Hagerty: We just put the bill out last night. Senator Blackburn and I did. And I think that is a great suggestion. Our teams are working right now to get co-sponsors today.

Leahy: Have your office let us know.

Hagerty: We’ll do it.

Hagerty: He is. And I think this is going to be a real issue for the people of Arizona. They’ve seen it manifest at the border. But now we’re seeing it manifest right here in Chattanooga, Tennessee.

Leahy: Do you see perhaps Kristen Sinema, another Democrat Senator from Arizona, have you talked to her about possibly supporting those?

Hagerty: I talked with her last night. She is one of the people who tend to see things more as we do from time to time. Joe Manchin similarly. We get a couple of those Democrats sentence those who have voters more like our voters in Tennessee.

We may be able to get the type of bipartisan support that we need. But just as a matter of principle, as a matter of fairness, the administration shouldn’t be operating this clandestine transit operation under the stealth of night.

These people are entering our country illegally, and it’s not that Tennesseeans don’t have a heart. It’s not that we don’t care for people, but we need our laws followed. We don’t want to encourage illegal activity.

And by doing this and by continuing to make the border work like a turn style and resettle people in the interior of our nation, we’re just putting a big magnet at our Southern border, attracting more and more of these illegal activities to continue.

Leahy: When you talked last night with Senator Sinema, the Democratic Senator from Arizona about this, bill, what did she say?

Hagerty: She didn’t commit, but she was interested in hearing about it. What’s happening in Chattanooga is what I think has got a lot of people’s ears perked.

Leahy: That sounds like Senator Sinema. She’s very smart but very cautious. And she’s a Democrat. She didn’t commit, but she listened. I would be very curious to see what Senator Sinema says in the future and Senator Mark Kelly in Arizona. Are there any other Democrats you think might support this bill?

Hagerty: It’s going to depend on how the situation evolves over the next week or two. But what we’re seeing in Chattanooga has sensitized the rest of America to what can happen.

And I’ve got to believe that this is not the only situation. So as this unfolds  I’m going to be aggressively reaching out to those senators that are affected, just like we are in Tennessee.

Leahy: Senator Bill Hagerty, I think this is a great bill that you’re introducing. Thanks so much for joining us today and talking about it. And please come back again and talk about what you’re doing up there in Washington.

Hagerty: Certainly. All the best. Thank you.