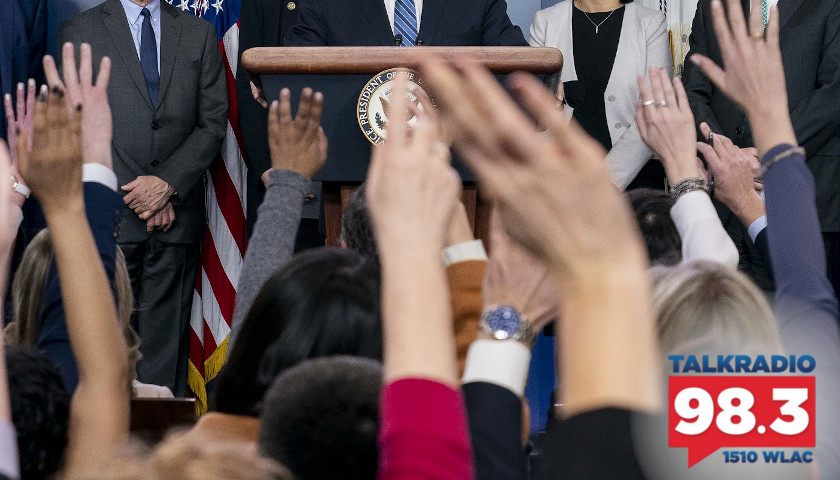 CEO and Publisher of New English Review Press, Rebecca Bynum Discusses the Roots of Her Business and Online Media

Live from Music Row Friday morning on The Tennessee Star Report with Michael Patrick Leahy – broadcast on Nashville’s Talk Radio 98.3 and 1510 WLAC weekdays from 5:00 a.m. to 8:00 a.m. –  host Leahy welcomed editor and publisher Rebecca Bynum of the New English Review in studio to discuss what it’s like to be a publisher in the ever-changing world of online media.

Leahy: We’re talking with Rebecca Binam, who is the founder, editor in chief, CEO of New English Review Press. That’s a book publisher. And there’s also an online magazine. And these books are fabulous. And it’s a business that’s been around for how long?

Leahy: A very impressive guy. He’s written books like Thought Criminal and other books of that nature. He’s been a guest on our program several times. We’ve had permission to republish several of his commentaries at The Tennessee Star and the Star News Network. Tennesseestar.com. Now, this new book, I’m so interested in how this came about. The book is a Dangerous God, A Defense of Transcendent Truth by Albert Norton Jr. How did this particular book come about Rebecca?

Bynum: Albert Norton is an attorney down in Georgia, and he sent me his manuscript. I started reading it, and I was so impressed. He’s a wonderful philosopher. And I said, listen, this is important. We need to publish this. And so we did.

Leahy: Now, let’s talk about that a little bit. How did he know about the New English Review Press here and a publisher based in Nashville, Tennessee? Because you know Rebecca, Nashville is now the center of America’s conservative media. Right here in Nashville, Tennessee. And I guess you started it, Rebecca. (Chuckles)

Leahy: Yeah, I tell everybody it’s growing. (Laughs) We do have the tennesseestar.com which we launched in February of 2017. We average about a million page views a month there.

Bynum: That’s excellent. But we’ve added six more states. We’re going to end up in years from now we’ll be in the 35 states where freedom is still possible with State House reporters. And we’re going to rival the Associated Press. But we’ll give honest, conservative-based worldview reporting.

We are now in Virginia with The Virginia Star, Georgia with The Georgia Star News, Ohio with the Ohio Star, Michigan with The Michigan Star, Minnesota with the Minnesota Sun, and this week, we’re delighted to have launched The Florida Capital Star, based in Tallahassee, with a fantastic crew down there, led by our managing editor, Steve Stewart.

Bynum: That’s fantastic. It gives us hope, doesn’t it that you could accomplish all this so quickly?

Leahy: And I think your public publishing company, the New English Review Press, gives people around the country hope because these are really great books for thinkers about the world in the American condition. How is it that the author of your new book by Albert Norton, Jr. how did he know that the New English Review Press based here in Nashville, run by you, Rebecca Bynum know about you, number one?  And how did he decided to send you the manuscript?

Bynum: He knew about Theodore Dalrymple, who is one of our major authors. And he found an article by him on our website and saw that we published books and just sent me the manuscript.

Leahy: Now, when the manuscript arrived, was it a complete manuscript?

Leahy: Now, as a small publisher of important books for anybody in our listing audience who’s interested in becoming a published author and who thinks they have something that you might be interested in, would you rather receive a completed manuscript or an abstract summary of the book?

Bynum: Either way. It depends on how far along the author is in the book. Sometimes they’re not quite finished when they send their pitches around to various publishers.

Leahy: Let’s talk about this in particular. How many submissions do you get in a month?

Leahy: Okay, three or four. So it’s not terribly taxing to review them and determine if it’s worthy.

Bynum: It takes some time. I don’t want to just quickly look at something and put it aside. I like to take my time looking at the manuscripts.

Leahy: Now the publishing world is going through a lot of the changes that the media is going through. And so in media, you’ll notice that something is disappearing and it’s called the printed daily newspaper. It’s going away, right? Because what we find is local advertisers who used to support print newspapers just don’t see the value in it anymore. They can do Google or Facebook and get a better return on their investment. That’s one of the reasons why local newspapers are going away except for The Tennessee Star and our constellation of Stars around the country in the Star News Network. Local newspapers really aren’t local anymore.

Bynum: Are you online only?

Leahy: We’re online only. Absolutely. It doesn’t make any sense to print.

Leahy: It doesn’t make any sense at all.

Bynum: Exactly. I get a lot of inquiries about the magazine thinking that the magazine is also in print. But we have never done the print magazine.

Leahy: It’s just it’s an additional level of complexity, and it requires additional capital. And it’s not sustainable in most instances in today’s world.

Bynum: No, you have to have so many subscribers. It’s really not sustainable.

Leahy: Let’s talk a little bit more about the business model of publishing and surviving. You take a look at the big publisher’s today and they have a model I don’t think works. They’ll give some famous person like, I don’t know, I think they gave Andrew Cuomo a $3 million advance for a book that probably didn’t make that nearly that much money.

Bynum: There is something fishy there. (Laughter)

Bynum: I think so. I think that these big publishers get some kind of deal with the government to print…

Bynum: Yes, and then they can offer the governor in this case, a great book deal.