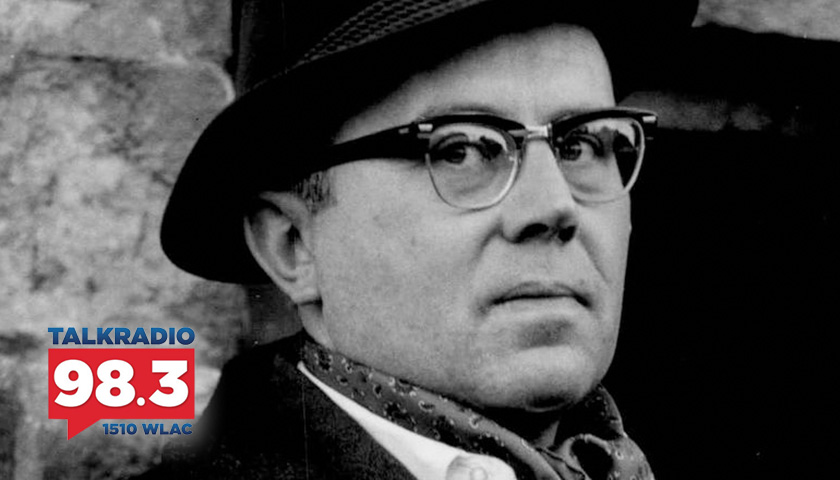 Live from Music Row Friday morning on The Tennessee Star Report with Michael Patrick Leahy – broadcast on Nashville’s Talk Radio 98.3 and 1510 WLAC weekdays from 5:00 a.m. to 8:00 a.m. – host Leahy welcomed CEO Jeff Nelson of the Russell Kirk Center for Cultural Renewal to the newsmaker line to talk about the history of the center and Russell Kirk’s contribution to American conservatism.

Leahy: We are joined now on our newsmaker line by Jeffrey Nelson, the executive director and CEO of the Russell Kirk Center for Cultural Renewal. Welcome, Jeff. Thanks for joining us.

Nelson: Thanks for having me. Michael. It’s great to be with you good and the people of Nashville.

Leahy: How could I not have met you? Because you are the founder of this cultural center, Russell Kirk, one of the greatest thinkers in the 20th century in America, cofounder of the National Review, and has written so much, so significantly, tell us who Russell Kirk was and tell us about your personal connection to Russell Kirk.

Nelson: Thanks, Michael. You set it up just wonderfully. Dr. Kirk is one of the founders of the conservative movement in America. And I’ll even push it a little farther. Your audience might like to know that every time they say the word conservative or refer to themselves as Conservatives, they’re drawing on Russell Kirk because it was Russell Kirk who gave us the very name.

It was all liberalism and that to be conservative, to have a conservative thought, was essentially, as one critic put it, to have a series of irritable mental gestures. It’s no respectable body of people.

Leahy: I love one of the books that he wrote, The Roots of American Order. I talk about the idea of ordered liberty. I wrote about a book in 2012 called The Covenant of Liberty: The Ideological Origins of the Tea Party Movement. And a lot of that was rooted in this concept of ordered liberty. Tell us a little bit about that.

So they thought that was the way. But Dr. Kirk tells us now there’s a deeper project here. We are Conservatives. Hence, he wrote The Conservative Mind, which is the seminal book that changed everything in America and made us all Conservatives.

And the project of conservatism and to be an American conservative is to conserve the tradition of ordered liberty that is embedded and enshrined in the American Constitution.

And that the great achievement of American civilization was to draw from the inheritance of the west from the civilizations that came before us.

Our American founders looked to Jerusalem and the tradition of Revelation and God in Athens and for the tradition of reason in Rome and for law and London, for this whole concept of representative government.

And America took from all these civilizations something from each of them and fashioned it into this concept that you just identified as ordered liberty reconciling the claims of both order and liberty.

Liberty alone wasn’t enough. Liberty alone sometimes can spin and often does spin out of control. It needs boundaries, it needs laws, and it needs tradition to hold it together.

So this concept of ordered liberty and putting that forward for not only American citizens but for the whole world as a beacon is the greatest achievement of American American civilization. And it must be upheld and defended and conserved and renewed and enlivened at all costs in every generation.

Leahy: Jeff Nelson, your career mirrors Russell Kirk to a degree. You were his literary assistant. You married one of his daughters.

Nelson: I did. I married the boss’s daughter. That’s an old thing, I guess so. I have a wonderful wife and three children, and I had the great privilege to work here and with Dr. Kirk.

He made a fatal mistake once of sending me down to Hillsdale College, where his freshman daughter was to pick her up after her first semester and bring her back up here.

Leahy: Jeff, it wasn’t a mistake. It was part of his ordered plan for liberty. (Chuckles)

Nelson: He did set in motion a number of things that wouldn’t have otherwise happened, including the privilege after his pass, because Dr. Kirk was such a unique individual. As you said, he was tied into the very foundations of American conservatism and close to National Review and Bill Buckley.

And so during the Cold War and the Communist era and even afterwards, people all over the world searching for freedom and for this American experience of ordered liberty we’re reading him at National Review.

Reading his books, reading his columns, and they would show up in America. They were looking for places to go and emigrate. And many times they came up to this village of Mecosta, Michigan, emigrated, and he would take them in.

He took in Poles. He took in a number of refugees from all sorts of places. From Cambodia, from Eastern Europe. It was just incredible the number of people that would show up and the Kirk’s with their hospitality would take them in, get their children in school.

They took it on unwed mothers. And for their pro life cause they had all these young conservative thinkers and scholars coming here and writers and journalists.

And so there’s this incredible variety and interesting community here that Dr. Kirk fashioned. And it was institutionalized after his death as the Russell Kirk Center to keep that work going and to keep students coming to this historic place.

Because as Conservatives, we have not been very good at preserving our foundational institutions and the legacy of our founders. The left, any activists, you know, they have a Museum or some kind of a house they preserved or something. But on the right, on the conservative side, in terms of our founders, there are very few.

Ronald Reagan, obviously, as a President, there’s been some houses in his library and his ranch and now his boyhood at home. But Buckley’s home was bulldozed.

Leahy: Bill Buckley’s home in Sharon, Connecticut was bulldozed? Are you kidding me?

Nelson: Yes. No, it was developed.

Nelson: This is the one place that’s left in the conservative movement.

Leahy: It’s in Mecosta, Michigan which is right near Grand Rapids.

Nelson: Yes, north of Grand Rapids. And it’s a center. It’s a village. It’s a library of 15,000 books. It’s homes where students and faculty and journalists stay and study and reside and come up for seminars and the lively Institute and center for construction.

Leahy: So I got two questions for you. Number one, how do you finance this and how can people help you?

Nelson: We finance it through private donations. We don’t take government money and so we are dependent upon the generosity of those who want students to have access to understanding the deeper currents of the American conservative tradition.

We don’t do policy here, but we’re deep educators. We’re conservators as you alluded to, conserving a tradition of roots of American order. And also they explain what that means today and keep it fresh.

We depend on those patrons who understand that in this day and age, given the state of the university students who don’t have access to that kind of education only get caricatures of conservatism, they come to the Russell Kirk Center and they get it right.

Listen to the interview here: