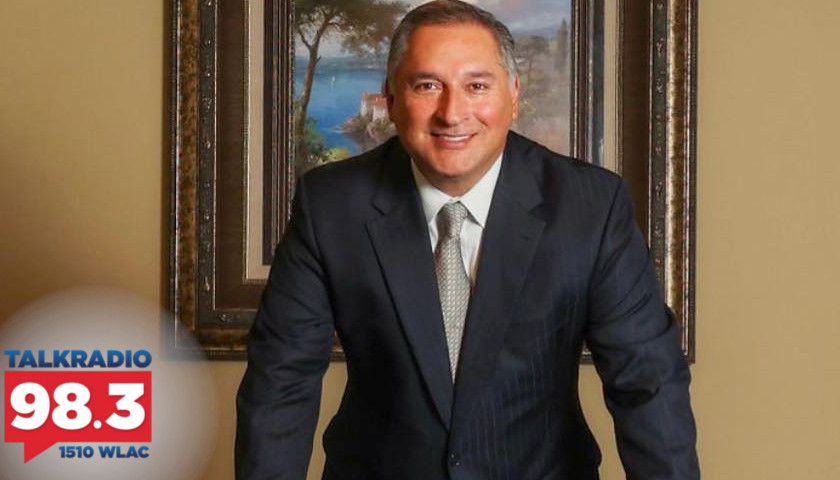 Live from Music Row Thursday morning on The Tennessee Star Report with Michael Patrick Leahy – broadcast on Nashville’s Talk Radio 98.3 and 1510 WLAC weekdays from 5:00 a.m. to 8:00 a.m. –  host Leahy welcomed Republican Mayor-elect Javier Villalobos of McAllen, Texas to the newsmakers line to discuss his background, border policy, and taking on federal immigration burdens in his community.

Leahy: We are delighted to welcome to our newsmaker line, the Mayor-elect of McAllen, Texas, Javier Villalobos. Welcome, Mr. Villalobos.

Villalobos: Hi. Good morning. And thank you very much for the invite.

Leahy: It has been a busy week for you, hasn’t it?

Villalobos: You know what? It’s been incredibly hectic, but in a wonderful way, though.

Leahy: So you were elected mayor of McAllen, Texas. It’s a very growing border city in the southeastern corner of Texas. Right across the border is Reynosa, Mexico. I’ve been to McCallen. It’s a great place. What’s the population of McCallen?

Villalobos: The population is about 150,000 right now.

Villalobos: It is considering, of course, when you take everything into consideration, the rest of the states, of course, everything is pretty much together have a population of close to about a million.

Leahy: What struck me about McCallen when I was there, which was about 10 years ago, a lot of new construction, a lot of sort of export-import business. And people there really seem to be growing businesses.

It’s still a thriving community, except for the past six or seven months have been a problem, haven’t they?

Villalobos: Well, you know what? It has been economically. You really should come to visit it again. After 10 years, we wouldn’t even recognize it. But, yes, of course, we’ve had some different issues. I think I know exactly what you’re talking about.

Six months ago, it was a little bit better. We are about 13 miles away from the border. And, of course, we’re having a few issues right now at any given time. McCallen has two international bridges.

Hidalgo-Reynosa and Anzalduas and at any given point we have hundreds, and I’m talking about hundreds of immigrants, which are transported, really to McAllen. Fortunately, we always say, look, immigration is not a municipal issue.

It’s a federal issue. But we’re kind of tied up. Border Patrol comes and they bring usually hundreds a day. We help process, even though we shouldn’t have to, but we do it for purposes of public safety.

Villalobos: To make sure the immigrants are ok. Yes, definitely. Because the Border Patrol comes, drops them off near the bus station. Unless we do something, we don’t know what’s going to happen or where they can be.

I’m not talking to whether pro or against the immigrants. However, we make sure that we take care of business, even though it’s not our responsibility. We keep on talking about it and asking the federal government, the president, Congress, Senate, to take care of the business.

It’s not our responsibility. Our taxpayers should not be burdening or have any responsibility for the issue. And it does. After a while, it becomes very burdensome.

Leahy: You said something there that kind of surprised me. Let me see if I understand this correctly. You said that the Border Patrol takes, I guess, is illegal aliens or who people have crossed the border illegally in buses and they take them in downtown McAllen and then just let him go. Did I get that right?

Villalobos: Fortunately, we have an organization that assists. Not a municipal organization. It’s a nonprofit that will assist and at least logistically keep assisting them until they are prepared to go to wherever they’re going to be going. And logistically, we assist the city assistant in transporting them to the bus station, to the airport, wherever we can. And that’s about it.

That is about it. I think the city has been doing a great job with a nonprofit where even though it’s not our responsibility, we keep on doing whatever we can for the purposes of maintaining peace and public safety and making sure that everybody is taken care of. Especially our residents.

Leahy: What is the nonprofit down there that helps process these I guess illegal aliens dropped off at the bus station by the Border Patrol?

Villalobos: They have been helpful. It’s a Catholic charity called the Respite Center here in downtown McAllen, and they have actually been assisting quite a bit. Without them, I don’t know what the city would do.

Leahy: Has the flow of illegal immigrants dropped off in downtown McAllen by the Border Patrol increased over the past year or so?

Villalobos: Of course. I think we all know probably about six months ago or five months ago they changed the federal policy and things became very different. I would venture to say it was a lot more comfortable five or six months ago.

So it has been different. Unfortunately, this is not the first time it occurred. Several years ago, the city spent close to about a million dollars. It’s different now. We’re not spending as much.

But regardless of whether it’s a million, whether it’s $10,000 or $5,000 it is not a municipal responsibility, and we shouldn’t be burdened. That’s our position.

Leahy: Tell us a little bit about your background.

Villalobos: Oh, certainly. I’ve been here in McAllen for 26 years and I’m originally from here. Actually, not a son of immigrants, but a son of migrants. So I’ve been around. I was a Republican chairman 10 years ago, which surprises a lot of people knowing my background or where I come from.

I ran for office and became commissioner. And then, surprisingly, to a lot of people, I ran for Mayor and against all odds as some people say. Because even though it’s a non-partisan race, everybody here votes Republican, Democrat, or Independent.

Leahy: Now, what do you do for a living, Javier?

Villalobos: Mostly the main business is that I’m a lawyer.

Villalobos: Yes, sir. What area of law do you specialize in?

Villalobos: Pretty much a lot of governmental work representing cities, schools, housing authorities, economic development, and corporations. But I like to dabble in trial work also, some of the criminal and litigation.

Leahy: So how did you personally decide to become an attorney?

Villalobos: As I said, I’m not from there. I’m from Crystal City, a small little place about 250 miles from here. I remember coming from a barrio. And that is the truth. But I played baseball.

And I remember one of the coaches, he was a lawyer, and I always looked up to him and I thought maybe one day. Of course, I didn’t think so because we were from the barrio.  But you know what it was?

I always say education is a great equalizer, and I really believe in that. And that’s what happened. That’s how we did it.

Villalobos: No, it’s about 250 miles North West of San Antonio, but it’s a small little place, a population of about 8,000 people back when I was a kid and still the same.

Leahy: So you’re a baseball guy? Did you grow up playing baseball as a kid?

Villalobos: (Laughs) And I love it. Still coaching. My kid doesn’t like to play with me anymore because he’s a senior in high school. So we started another team again with T-Ballers. So here we go again.

Leahy: I’m a big baseball fan. I love playing it. I was in high school. I was probably I was a good field no-hit guy right infielder. I hit about 240 s you can see why I didn’t make it past high school playing baseball. What position did you play?

Villalobos: I used to play second base and outfield.

Leahy: I was a second basement and a third baseman, too, so it was kind of fun. Who’s your team now?

Villalobos: Even when my kids were little. Now, if you’re talking about our local team, we’re called the Villalobos. Of course, I got The Lobos.

Villalobos: Once again, brand new kids because our kids grew up and they don’t want to hang out with dad anymore. So we got a new batch of kids. (Leahy laughs) Let’s see what we can do with them.

Leahy: Let’s talk a little bit about baseball for a minute in youth development. When I was a kid, many years ago, in the summer, I lived on a hill and there was a valley. I would ride my bike down the playground and people would be there.

And we would just play pick-up baseball. I did it every day. Today, it seems a lot harder for kids to play baseball.

Villalobos: It’s totally different nowadays for kids. I did exactly the same back then. You just get a bunch of kids and there’s an empty lot and here we go. Let’s play ball. It’s a little bit different nowadays.

But now the ones that are organized, there’s baseball all year round now. And if it’s organized, I mean, that’s a beautiful thing. The issue we have a lot of the times not just here, McAllen but everywhere is finding spaces for practice.