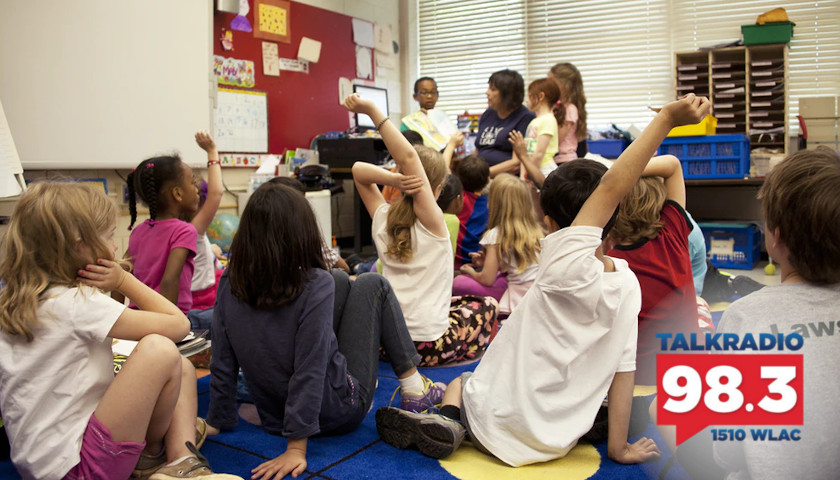 Live from Music Row Tuesday morning on The Tennessee Star Report with Michael Patrick Leahy – broadcast on Nashville’s Talk Radio 98.3 and 1510 WLAC weekdays from 5:00 a.m. to 8:00 a.m. – guest host Cunningham welcomed Grassroots Engagement Director of Americans for Prosperity-Tennessee Grant Henry and Mayor Andy Ogles in studio to discuss the news of the day and education in the era of COVID.

He just keeps adding people and states all the time. I don’t even know how many states he’s up to. More than a dozen, I think. And he has, of course, The Tennessee Star and all the other state Stars. And it is your one source of dependable conservative news.

And I’m telling you, Michael just works his tail off. Hopefully, I can say that on the radio, but he works very hard to bring good, solid, fact-based – but with admittedly conservative bent – news to you.

And the news we get should be reported objectively without bias. And that, of course, is the objective. But unfortunately, we’re getting that more and more. The news that’s being reported has a definite bias to it.

And you’ve got to interpret the news and the light of the bias that – from the source. And that’s just, unfortunately, what we, as news consumers, have to do these days. There’s no question about it. Andy, you had a report on a breaking story. Are there any updates to the Smile Direct shooting?

Ogles: I just looked and the information is the same. So they’re off of Antioch Pike, the Smile Direct warehouse. There was a shooting just moments ago. Two employees were shot. The shooter has been neutralized. And what I mean by that is that the shooter has been shot.

I don’t know his or her condition. So the scene seems to be secure. But if you’re traveling in that area, just know that it’s going to be crazy there for a bit as they kind of unpack what’s happened.

I know that the parking lot is taped off with crime scene tape, et cetera. But just be careful. If you’re in the area, make way, yield to the police because they’ve got a job to do this morning.

Cunningham: And it may well affect the inbound traffic from Murfreesboro and points out from there. So if you can take an alternate route this morning, that, unfortunately, and those kinds of things do occur.

And that really is a central part of the cultural fight we are in. Let me give you just a little bit of an update. Speaker Cameron Sexton will be joining us at the bottom of the next hour to talk about a pretty amazing news conference that he, the governor, and Jack Johnson, and our Education Commissioner had yesterday talking about getting kids back to school.

And if they don’t have that, then they need alternatives. And in the press conference yesterday, Speaker Sexton actually mentioned possibly even going for more vouchers. And that was a pretty amazing statement.

Of course, the voucher bill that was passed is in litigation now. I think they’ve made their statements before the Supreme Court, and we’ll probably hear about that fairly quickly. I don’t know. Do you guys got any insight into how long it’ll be before we hear?

Ogles: I think it’s anybody’s guess when you’re talking about the media outlets. I’ve got a story here from The Tennesseean that was talking about they looked at the test scores and – prior to COVID – rising fourth graders. So transitioning from the third grade to fourth grade.

At the end of the school year, kids are tested, and you only had about 35 percent of third-graders or rising fourth-graders reading on level. And then when you look at this new data, which is abysmal, by the way.

When you look at 65 percent of kids not reading on the level and roughly the same amount – 62 percent or so – not doing math on the level.

And what we’ve seen because of COVID is anywhere from a 10 to 20-point drop in test scores. Across all grades, the average is: only 29 percent of Tennessee students are on grade level for English. Only 29 percent.

Cunningham: That’s across all?

Ogles: All the grade levels.

And that’s a round number. I’m kind of just using a generic round-fixed figure there. But seventh and eighth graders reading or doing math, only 30 percent. We’ve got to do a better job in the state of Tennessee.

The system we have isn’t working. So I’m excited to have the Speaker on and let you guys ask questions because we’ve got to take this system, dismantle it, and build it back with a new approach. If there is an upside of COVID, I think it pulled the veil back on education in the state of Tennessee and really across the country.

And you see kind of this Critical Race Theory and some of these LGBTQ curriculums that have been forcibly inserted into our curriculums, and now parents are woke. Let’s take that term. I’m glad to see parents waking up to the crap that’s being force-fed to our kids, and let’s get back to the fact that it’s up to parents to teach.

Let’s give parents the right to choose where the kids are going to be taught. And it was a firm to hear the Speaker of the House being so forceful on this issue yesterday.

Henry: Yeah. What’s the old adage? We don’t have a democracy, we have a democracy of those that participate. I think Mayor Ogles just pointed to this directly. That one of the strange silver linings that have come down, come out of all these shutdowns, is that more people are paying attention to how their children are being educated in the state of Tennessee, I think than almost ever before.

At least in my lifetime. Granted, I’m somewhat young, but you get what I’m saying. I think if you’re looking at, say, the Critical Race Theory situation, or maybe if you’re looking at the math situation, or if there’s anything going on with public school that you might find even somewhat distasteful, maybe start looking into some alternate options.

Maybe start looking into considering some legislation at the state level for backpack funding, where the funding follows the child. Or look into what that ESA bill from several years ago did. The educational savings account bill.

The idea was to get a more personal touch on the way that your child is educated because there’s nothing more determinative in a child’s education than parental involvement and parents choosing how to educate their children.

Ogles: Well, I know we’re coming up on a break, so I have a shameless plug.

Henry: Do it! I love it! This is a good news segment right here.

Ogles: So my daughter’s going into the ninth grade, freshman, in high school, and last night she tried out for the volleyball team – so, the high school volleyball team. And so she was fired up last night, just anxious, kept checking because the coach had said that she’d either send out the team roster either late last night or first thing this morning.

So we just got the roster. So my daughter, a rising freshman, made the high school volleyball team, and she just found out and she’s excited. I can’t wait to chat with her in just a minute and congratulate her. Because she was one of three freshmen that made the team. So, way to go, Adelaide.