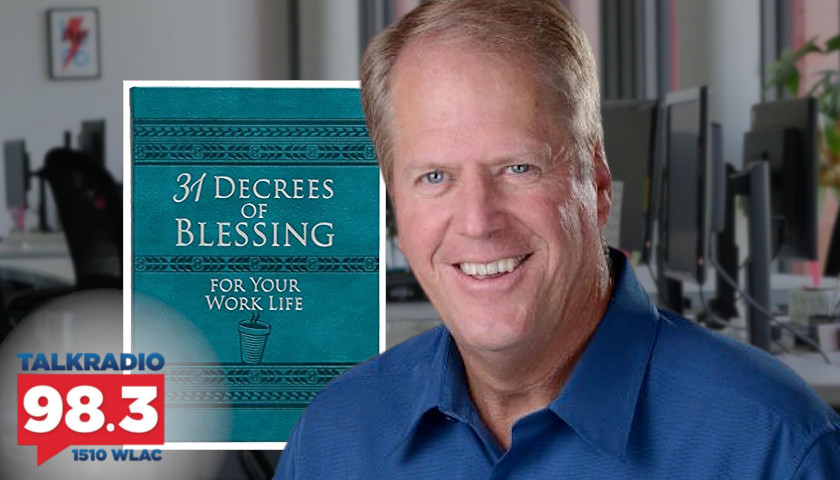 Live from Music Row Friday morning on The Tennessee Star Report with Michael Patrick Leahy – broadcast on Nashville’s Talk Radio 98.3 and 1510 WLAC weekdays from 5:00 a.m. to 8:00 a.m. –  host Leahy welcomed author Os Hillman to the newsmakers line to discuss what motivated him to write his new book, facing adversity and brining Christian values into ones work life.

Leahy: We are joined by Os Hillman who is the author of a book called 31 Decrees of Blessing for Your Work Life. Welcome to The Tennessee Star Report Os.

Hillman: Michael good to be with you today.

Leahy: So tell me a little bit about Os Hillman.

Hillman: Well Michael, my background is advertising. I had an ad agency for 12 years in Atlanta back in the 80s. And then God took me through a season of adversity. That seven-year season led me to a whole new area of focus which I help men and women understand the spiritual value of their work life. And that was a calling and help teach and equip them. I ended up going to 26 countries teaching and equipping leaders and 21 books later. (Chuckles)

Leahy: 21 books! That’s something. That’s quite a bit. Are you still the president of Marketplace Leaders?

Leahy: Tell me about Marketplace Leaders.

Hillman: Yeah, we equip leaders to help them understand how to walk with God in their work-life and integrate their faith life. And so we do that through devotionals and seminars and online teaching and books and conferences. And so we are primarily a training organization.

Leahy: Well, I gotta tell you I’m looking at it a little bit from the outside. I don’t think it’s going so well for Christians in the workplace these days.

Hillman: Well, it’s a tough world out there. And I was just thinking how when we look at the cancel culture and the things that we’re facing today it is a tough environment for sure.

Leahy: Now you have some practical suggestions for Christians in the workplace. But also I think you have an element there that says as a consumer, support those businesses that have Christian values. And you mentioned Hobby Lobby and Chick-fil-A as a starting point. Tell us a little bit more about that as consumers. How do you discern if a business is run on Christian principles consistent with your own?

Hillman: Well, I think that Chick-fil-A is a great example of that. When you go to a Chick-fil-A you recognize that there’s something different about them. And that difference is the values that they place in how they train their employees and how those employees treat the public and the service they give. And that’s not by accident. And that all goes back to the Christian values of Chick-fil-A. And I’ve been to their headquarters several times in South Atlanta and they’re the truth the true deal.

Leahy: That’s interesting. And just says a customer I have never had, never had anything but a fantastic customer service experience with Chick-fil-A. I mean they have one down here. I live in a suburb of Nashville and the nearest one is in Spring Hill and I go by there. When it was like 15 degrees outside there were high school students working for Chick-fil-A.

Wearing the headsets and wearing gloves taking the orders with a smile. It was just incredible there. The customer service at Chick-fil-A, you go through and you think every single employee treats people very very well. And obviously, they do thorough training for everyone that works here.

Hillsman: That’s right. And they’re the number one customer service in the fast-food industry. They’ve been recognized professionally by that. And so that is something that’s built into them. But it all goes back to their Christian worldview and their value system that gets presented and instilled in their whole team.

Leahy: I will put a little asterisk on Chick-fil-A. Not for you to address but just for our listeners there. They apparently have in some regards become a little bit ‘woke’ with some of their charitable a givings. But that’s a story for another day. (Chuckles) If we can shift gears a little bit to the decrees of blessing. 31 Decrees of Blessing for Your Work Life. That’s your new book. What do you mean by a decree of blessing?

Hillman: Well in the Bible, there is an Old Testament verse that says so shall my word go forth. I’m looking for the right scripture verse there. It’s actually out of the Old Testament in Deuteronomy where it talks about giving a decree. I will make a decree and it shall come to pass. And so what we see in the Bible is the spoken word as used so much in Genesis one you see a whole series of verses that said and God said.

And God said. And God said let the waters under the heavens be gathered etc. But in the New Testament, we see examples of decrees where God or someone speaks out the word. Jesus spoke to the fig tree and the fig tree died. He spoke to Lazarus to come forth and he came forth. And you know, so there’s a principle here that there’s power in the spoken word of God.

So the devotional helps us come to understand the value of speaking out words and in situations. And understanding where the word of God encourages us to speak it out. And so there are 31 devotional messages and then there are 10 decrees based on a Bible verse to help you make a decree that day.

Leahy: When you make a decree, what exactly are you doing? What’s the definition of a decree?

Hillman: A decree is let me just give you an example. For instance, one decree and blessing would be I will treat my employees based on values and love today. That’s a decree. It’s making a statement if you will about a particular situation.

Leahy: I’m looking at dictionary.com. It says a decree is a formal and authoritative order. Especially one having the force of law. Theology it is one of the eternal purposes of God by which events are foreordained. Do any of those definitions fit?

Hillman: Sure, you know in another example was Ezekiel in the Old Testament was speak to the dry bones.

Leahy: Oh, yeah, that’s right. Yeah, that old classic song based on that.

Hillsman: That’s right. And Joshua was told to speak to the walls after walking around seven times and you know to shout to the walls. And Jesus spoke to Lazarus to come out of the out tomb. And Peter told to the crippled man said, you know be healed in the name of Jesus. So these are examples of actually speaking out situations in overcoming problems. There’s another verse in Mark that says speak to your mountain. And so we have other examples of marketplace situations that happened when people spoke to their issue. (Chuckles)

Hillsman: Well, I started writing that back in the late 90s and it was really in response to my own adversity at that time. And I just started writing devotionals about life and work and adversity. And little did I know how it would touch people all over the world and it now goes to 105 countries. So every day a message goes out is about.

It’s a four-minute devotional designed to encourage you in your workplace and how you walk with God at work. And many people are just encouraged by that every day. We actually have four devotionals that go out every day. Each one has a little different theme but they can find that at todaygodisfirst.com.

Leahy: You talked about your adversities. You have a very interesting story. You had your own ad agency for a time?

Leahy: For 12 years and then you ran into adversities. Tell us a little bit about those adversities.

Hillsman: Well, I was doing really well in our business and then one day my financial advisor called me and said that the half-million dollars that I had tied up with them were gone.

Leahy: You tied it up where?

Hillsman: It was an investment. And my advisor said it’s no longer in existence. It has been stolen by a Bernie Madoff type of guy that we had invested with. And then I had 80 percent of my business tied up with one client who fired us and refused to pay $140,000 he owed.

Leahy: So you had a one-two punch there.

Hillsman: Well, I had two-three punch. My wife and I were having problems and she ended up leaving me. And all that happened in three months.

Leahy: In three months. We have to hear the rest of the story. Hang with us through the break.

Tune in weekdays from 5:00 – 8:00 a.m. to the Tennessee Star Report with Michael Patrick Leahy on Talk Radio 98.3 FM WLAC 1510. Listen online at iHeart Radio.
Photo “Os Hillman” by Os Hillman. Photo “31 Decrees of Blessing for Your Work Life” by Amazon.