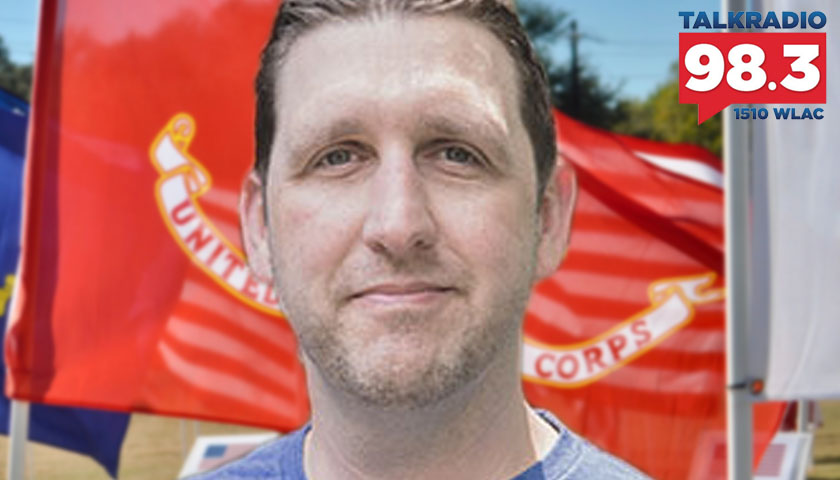 Live from Music Row Monday morning on The Tennessee Star Report with Michael Patrick Leahy – broadcast on Nashville’s Talk Radio 98.3 and 1510 WLAC weekdays from 5:00 a.m. to 8:00 a.m. – host Leahy welcomed the Travis Manion Foundation’s Dir. of Marketing Derrick Morgan to the newsmakers line to discuss their mission and the upcoming Marine Corps Marathon.

Morgan: Good morning. How are you?

Leahy: So tell us about Travis Manion.

Morgan: Sure. Travis Manian was a Marine who was killed in Iraq in 2007. And his family started the Travis Manian Foundation in his honor. Travis was killed when he was hit by an enemy sniper while pulling his platoon teammates to safety.

Travis managed to save every member of his platoon. He really just lived a life of character. And that in itself is what our Foundation does. It is taking that idea of character and really using it to leverage and inspire families of the fallen veterans to continue to serve in his honor and all of our fallen military members.

Leahy: On the web at Travismanion.org. Tell us about the programs of the Travis Manion Foundation.

Morgan: Sure. The main program that Travis Manion Foundation does is called Character Does Matter. And we are empowering veterans and families of the fallen to inspire and lead the next generation to live a life of character.

And what Travis Manion Foundation does is give them that opportunity to continue to serve after they’ve taken off the uniform. So veterans and families of the fallen will go into schools and give presentations on character and talk to students about what it means to live a life of character.

It’s not necessarily about joining the military, but it’s about looking at our fallen heroes and how they live their lives. And the steps that our young people can take every single day in their own community to live a life of character.

Whether it’s picking up a piece of trash, whether it’s holding the door for someone, helping your neighbor, and doing food collection drives. It’s just that idea of being high character individuals and how they can do that in their own community.

Leahy: One of the things that caught my attention is that you have an engagement with the Marine Corps Reserve Marathon held every fall in Washington, D.C. Tell us about how that began.

And Travis while he was over in Iraq, called his father and said, hey, you know, I think I’m going to do the Marine Corps Marathon. And Colonel Manion said, alright, Travis. I’ll do it with you. And they agreed to do that. And then Travis, unfortunately, was killed.

That being said, Colonel Manion decided he was going to keep that commitment to Travis. And low and behold, a good number of his family and friends came together, and they decided to run the marathon with Colonel Manion. Ironically, when Colonel Manion ran that marathon he pinned Travis’s chip on one of his shoes and his own on the other.

It was kind of like Travis was running the marathon with him that day. And from that, it was kind of born. Our first team doing the Marine Corp Marathon, Travis’s best friend at the Naval Academy, Brandon Looney, unfortunately, was also killed just a few years later.

He was killed in a helicopter crash in Afghanistan. So it really kind of started as a team Travis and Brandon idea at the Marine Corps Marathon. And since then, it’s just grown. Every year we’ve got a team of close to 300 people that come out.

Morgan: There is. There’s a 10K option. There’s the full marathon, or you can also walk the marathon with a weighted backpack.

Leahy: Oh, my goodness. Who does that?

Morgan: Not me, that’s for sure.

I actually have run the Marine Corps Reserve Marathon way back when. Scooter our producer, Derrick, and he’s looking at me like, really, you were able to run a marathon?

It’s a beautiful run, though. It’s absolutely beautiful. It’s stunning because you go around all of the monuments in D.C. I think at about the 20-mile mark you go around the Jefferson Memorial around then. It’s just stunning.

Morgan: It is. It’s fantastic. And the atmosphere there is like nothing else. I’ve been down there a couple of times and it’s just breathtaking. I’ll say what is very touching is I’ve seen so many times where once some people will finish the race they’ll then wander into Arlington National Park and they’ll place their metals on the gravestone of a fallen loved one. It’s just this beautiful thing.

Morgan: I’ll say it probably has been yes, that’s the case. Yeah, I’m sure it must be. I mean, it’s certainly very popular now. And in fact, they just announced, I think it was last week that they now are going in person again. So that’s definitely some good news to hear.

Leahy: So it will actually be an in-person marathon, right?

Morgan: It will. I don’t think they’ve released all the details that they announced last week that it is going to be in person again this year.

Leahy: Did they do a virtual marathon last year?

Morgan: They did. Everything was a virtual Marine Corps marathon. Obviously, any kind of run event where virtual last year. And Marine Corps Marathon was one of those.

Leahy: How do you do a virtual marathon?

Morgan: What you would do is sign up for the marathon. We had our full team still involved. And you basically run the marathon in your own space. You go out from your house or you go to a local track or trail or whatever it is and you’re tracking yourself doing your 26.2.

And for us, as I said, it’s our team that does the Marine Corp Marathon. It’s a fundraising wing for Travis Manion Foundation. We have the benefit that at least our members really still wanted to make sure they could support TMF in that aspect. We still had a good number of people that did the virtual option.

Leahy: If somebody out in our listing audience wanted to participate with the Travis Manion team at the marathon coming up, the Marie Corps Reserve Marathon coming up in October, what would they do?

Morgan: They could just go to Travismanion.org. That’s where all our information is. They can sign up to be part of Marine Corps Marathons. They could actually sign up to even contribute towards our campaigns that we’re doing for Memorial Day. The 9-11 heroes run. Any of our campaigns and fundraising options. Everything’s right on our website.