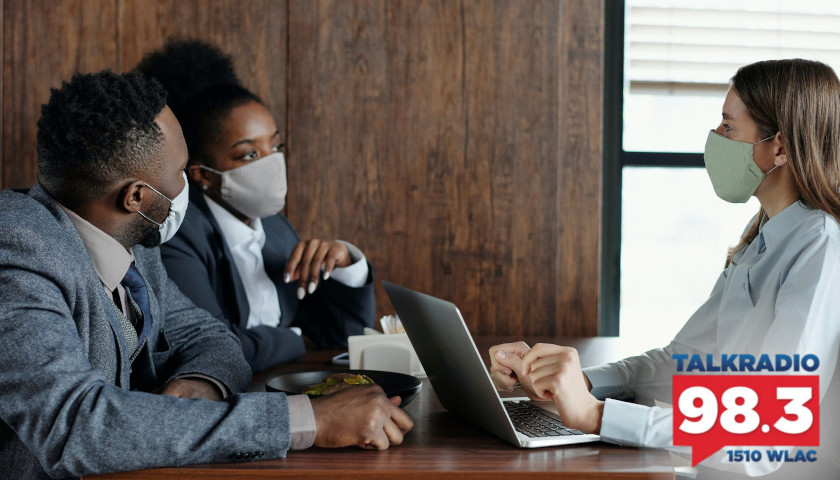 Live from Music Row Tuesday morning on The Tennessee Star Report with Michael Patrick Leahy – broadcast on Nashville’s Talk Radio 98.3 and 1510 WLAC weekdays from 5:00 a.m. to 8:00 a.m. –  host Leahy welcomed Maury County Mayor Andy Ogles in the studio to weigh in on the unconstitutionality of lengthy mask mandates with limitless scope implemented by several state governors and county mayors across Tennessee.

Leahy: We are in studio Mark Pulliam the California Refugee and the Blogger at Misrule of Law from Blount County. He has driven all the way down here to join us today. And then driving up from Maury County who is the mayor of Maury County Andy Ogles. It takes you about an hour and five minutes to get up here. I appreciate your taking that time. You must have left about 4:45 a.m. in the morning.

Ogles: I sure did. You know I got up early. And in fact, I texted you saying I’m en route.

Ogles: It’s good to be here and to be with Mark. And again I’m a student today learning from you guys. When I was driving up, I was listening to you guys talk about the controversy surrounding the University of Tennessee and some of the curriculum that’s really permeating the Collegiate schools in Tennessee. And I see that as an issue as we go forward.

I’ve got children that are 13, 11, and 5. I’m terrified but they are going to a Christian school. They’re going to a school that has a classical education. But when we turn them loose into college that when they when I get them back four years later I won’t know who they are. And I think that’s a real fear that any parent should have in today’s world.

Leahy: I think you’re exactly right about that. Also in the last segment Andy you said something very intriguing to me. (Ogles chuckles) I want to explore that a little bit. So I opened with the idea that county governments may have difficulties dealing with the federal government. And you said and I think it’s probably true. And I wonder if you could elaborate on this. County governments are now also having difficulties dealing with the state government. Can you tell us a little bit about that?

Ogles: Yeah. Obviously, almost a year now with COVID we’ve been under a state of emergency here in Tennessee for just short of a year. They’ve been extended to the end of April so will breach the year mark with the state of emergency. That creates complications for state government as we try to manage our economy and our schools and our health department.

When you have a state of emergency that has usurped some of that local control now everything gets a little more complicated because you’re working with the state or you’re at the behest of the state. and so it’s been frustrating. For me, I’m all about liberty and low taxes and things of that nature. So the idea that we would have a mask mandate or that someone would be required to have a vaccine that’s really unproven.

Now, I’m not saying that they haven’t tested it but it hasn’t gone through the years of testing that a normal vaccine would. Now look if you’re high risk go talk to your doctor. That’s a choice that you have to make. You make that decision for yourself, but I shouldn’t be required or be able to require you to take it when you’re having to sign a waiver giving away all sorts of rights as far as if you’re damaged by said vaccine.

In fact, there was a poll as I was driving and I was flipping channels talking about that roughly 45 percent of Americans say that they’re not going to get the vaccine. So this idea of zero COVID that we’re going to be totally able to eradicate This virus is a myth. and it’s more about control than it is anything else. And I’m not saying that the precautions aren’t applicable in certain situations. But again, these mandates have to stop.

Leahy: Let’s talk about the constitutionality of these emergency powers exercised by various governors around the country and are still here in Tennessee. I have always felt that the emergency power has been subject to abuse. I’m still not convinced that it’s constitutional. What are your thoughts on that?

Ogles: Whether it’s a local government or in the state, when you think of an emergency you think of something that will be regionalized to a part of a state. So think about Katrina or if you had an earthquake along the New Madrid fault. It’s going to be localized to West Tennessee or if you had a dam breach at Normandy. It’s going to be you know, the Cumberland Plateau, Southern, and Middle, Tennessee.

There is an occasion where a governor or your localities might need a state of emergency, but it’s imperative that these states of emergency be short in duration and scope. And what we’ve seen under COVID and not just here in Tennessee, but across the country that these states of emergency are neither short and neither are they limited in scope as far as what the governors are doing even going so far as to changing election law when the Constitution is clear how elections should be managed.

Leahy: Yeah, and the governors that are exercising these emergency powers, which I agree with you should be short in duration and limited in scope. It seems to me now that they want to make them permanent and use them to basically squelch the individual liberty of the citizens of the state. That’s what it looks like to me. Will we see these emergency powers and in the state of Tennessee next month?

Ogles: (Laughs) I don’t know. If I had that crystal ball and go buy a lottery ticket. It doesn’t seem that way. When you look at the numbers, the numbers are down. We now have a third vaccine that’s coming to market. From a protocol standpoint the therapeutics that when you go to the doctor, they have different medications that they can give you now depending on the severity of your COVID symptoms etc.

And so we’re in a different place today than we were a year ago. We said this when I was on the show a couple of weeks ago. March and April of last year was terrifying. We didn’t know what we were dealing with. We didn’t know the effects of how it would mutate would it change and affect our children? But we now know what it’s going to do. It’s a virus.

When you look at At Maur County, for example, at it just sheer population where 16th and population in the state of Tennessee, you know, where we are currently and numbers of active cases? We’re 16th. Why? Because it’s a virus and it spreads based on population. We don’t have a mask mandate in Maury County. We’ve never had a mask mandate and Maury County.

We’re not going to have a mask mandate in Maury County because it’s unconstitutional. But I don’t need an advanced degree in medicine to understand that a virus is a virus and viruses spread the way viruses do. And I know that’s a very oversimplification but the data over this last year spells out masks, it’s not about masks. It’s about personal responsibility. The three of us are sitting in here in this studio and we are socially distancing.

If we want to shake hands, use your hand sanitizer. Common sense kind of stuff. If I don’t feel well, I’m going to stay home. I mean this isn’t rocket science folks. It’s the same thing if I was coming down with the flu. If my kids have the flu and I suddenly don’t feel well guess what? I’m going to assume that I have the flu I’m going to call my doctor. I don’t know why we have to take away liberties and the age of a virus that has a 99 percent survival rate. Anyway, I’ll stop.

Leahy: No no. Don’t stop. We are smiling because I want to follow and jump in on this Mark as you wish. So one of the things I want to follow up on. You said something very important there. Mask mandates are unconstitutional. I agree with that and yet we do see that masks to me it’s a bit of theater. Everybody in science recognizes that a mask is not going to stop the penetration of a very very small virus. It’s just not going to happen.

It may stop a droplet but having said that, if you look at the polling about 60 percent of the people support wearing of masks. But that is I think a bit of just about visible theatrics and not anything that is related to science. At least from what I can tell. Alex Berenson at The New York Times writes about it. You’re familiar with Alex Berenson Mark.

He’s a very former New York Times reporter and he’s written extensively on this. And I applaud you as mayor of Maury County for not using a mask mandate. Now I look at other mayors and the governor and they say well mask, mask, mask. I’ve always thought it was unconstitutional to do that. I agree with you on that.