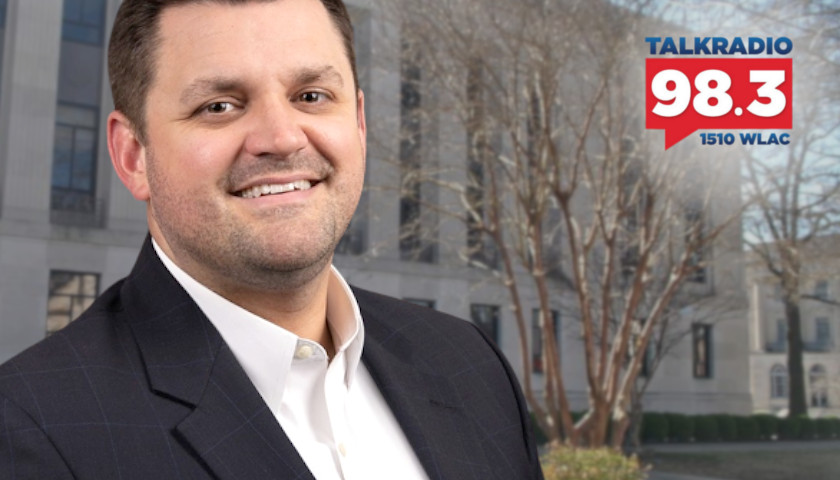 Leahy: We now welcome to our newsmaker line, Mr. AJ Massey, who is running for mayor of Madison County. Good morning, AJ.

Massey: Good morning, everybody. How are y’all?

Leahy: We’re great. We’re delighted to have you on here. So tell us about yourself. What’s your background, AJ?

Massey: Sure. Yeah. I’m a native of West Tennessee, grew up in West Tennessee and went to college here and had a 17-year career in banking. And that ended in January when I elected to run for a local office. You can’t really chase two rabbits, don’t do well with that. So we chose to run for office. So we’ve been doing that since January.

Leahy: People know Jackson as the place you stop to get gas two hours from Nashville sometimes, to the west, about an hour from Memphis. Good restaurants there.

I stop by and take a break there sometimes. But people don’t know that much about Jackson and Madison County. Tell us a little bit about some of the challenges there that you face in Madison County.

Massey: Sure. Madison County is, you’re exactly right. We’re right down in the middle of everything. We’re called the Hub City. Jackson is called the Hub City for a reason. All the West Tennessee, outside of Memphis, looks to Jackson for commerce and for goods and a lot of well-paying jobs.

And so as far as what challenges are, I think we’re a disproportionately high poverty number in the city of Jackson, and really Madison County as a whole. So that’s a challenge that makes education difficult, that makes law enforcement difficult, and that makes a lot of things difficult.

If you don’t know what that is, it’s an indoor water park hotel, and nearly 500 rooms have been built in the city of Jackson. We’ll have, of course, the Megasite in Haywood County where Ford Blue Oval City will be in the next few years.

That’s within about 40 miles of our county border. That’s going to be a big shot to Madison County and West Tennessee. So that’s really what we’re trying to do, is trying to get ahead of these things, be paying attention.

I’ve got a young family, and I want the next 20 years. I want them to be around here. I want my boys to choose to locate in West Tennessee and not be too far from Mom and Dad, and hopefully grandkids someday, so we’re trying to make this place as attractive and as safe and, giving them everything they want, where they don’t feel like they need to go anywhere.

Leahy: Crom Carmichael, our original all-star panelist has a question for you, AJ.

Carmichael: AJ, how close is Jackson to that new Ford facility?

Massey: It’s about 40 miles. Between 40 and 50 miles, depending on how you go, between Madison County and Blue Oval City.

And that’s actually a great opportunity. Ford has a requirement that a certain number of suppliers that are going to help that plan out with different needs are required to be within 50 miles of that facility.

So that really puts East Memphis, that puts some of our north, west counties, and then, of course, Madison County is sitting right there ready to accept a lot of the suppliers. And our infrastructure is ready for that.

Carmichael: So, Jackson is inside that 50-mile radius?

Massey: One of our most, and I don’t know if there was just some foreknowledge there or just some premonition, but the western part of our county nearest to the Megasite has a vast option of industrial sites that are already with wastewater and utilities. And so we’re just waiting for the right businesses to take their claim to those.

Massey: Absolutely. Well, we’re trying to pay attention. We’re trying to be on our toes. We’ve had similar leadership in Madison County for the last, really, 30 years. And the folks that have chosen to run in this race as well are kind of on the same cloth.

And there are some statistics that came out not long ago that has Madison County ranked 95th out of 95 counties, in nearly every category. And that whole thing is if we do what we’ve always done, we’re going to get what we’ve got.

As I said, I’ve got an 8-year-old and a 3-year-old boy. And that’s where my focus is, trying to build a community that they can be proud of over the next 20 years.

Leahy: AJ, what is the most important fresh new idea you have to improve the status of Madison County from, as you say, 95th out of 95 counties in almost every category?

But it’s schools. Schools really drive everything around here. I’m sure it is with most communities but that’s going to reduce our crime rate.

That’s going to reduce our jail population. That’s a long-term play, though the further down the line we get we have to make sure those children are educated at grade level when they’re first, second, third grade.

That way they kill that public-school-to-prison pipeline that seems to happen, and that obviously helps with crime, helps with commerce, and the ability to supply the workforce for all these great companies. I’m passionate about schools. I think our schools need to be …

Leahy: Let me ask you a question about that. In the four years you’ve served on the Jackson Madison school board, what have you done to improve the status of schools there? Because it looks like everywhere in the state over that four-year period the performance of students has gone down, down, down.

Massey: Sure. Madison County is a unique county. We have four thriving private schools and so there are lots of options here in town for nontraditional public education.

There’s also a district just north of us that’s just done the right things and they’ve attracted a lot of families to move outside of our county to go to that district.

But the way last four years we’ve had tremendous success with our academics in our classroom. We have some very pointed, data-driven curriculum that’s happening in our classroom that’s showing improvement.