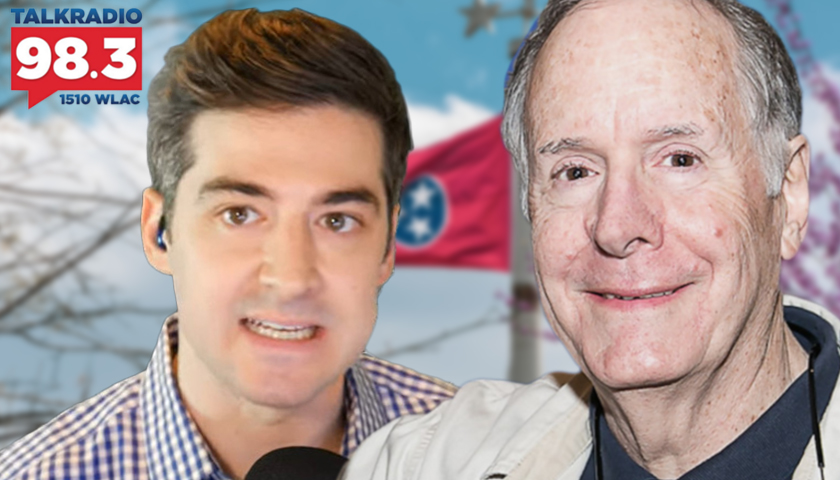 Live from Music Row Friday morning on The Tennessee Star Report with Michael Patrick Leahy – broadcast on Nashville’s Talk Radio 98.3 and 1510 WLAC weekdays from 5:00 a.m. to 8:00 a.m. – guest hosts Grant Henry and Ben Cunningham talk in studio about the need for a special session in the Tennessee General Assembly and for Lt. Governor Randy McNally to identify the momentum.

Henry: My name is Grant Henry. Enunciation for those in the know Ben Cunningham. I work for an organization called American’s for Prosperity. Ben’s over there. He’s just like anything and everything and uncomparable. You probably know him from the Nashville Tea Party.

Cunningham: Wow. What an introduction.

Henry: I tried my best on that one. (Laughter) I’ll give you $5 for that one. It’s great to be here. It’s fun to sit in when Michael is gone and rant and rave. There’s so much going on, you teether between total depression and slight optimism these days. But we’ve got a fight.

And there are so many good fighters out there to inspire us. I was reading an article yesterday about people standing up. Molly Hemmingway who is with The Federalist.

But she’s one of these people who is fearless. And we’ve just got to all be like Molly, basically, and stand up and fight for these basic values. And that’s what people were doing yesterday at the Capitol.

Chris Butler and Laura Baigert out there doing some incredible things amongst many others at The Tennessee Star. Tennesseestar.com. Here’s the headline. Angry Tennessee Residents Burden by Covid 19 Policies Rally for Special Legislative Session Without Delay.

I know you were streaming this on the Nashville Tea Party page. I streamed it on my old talk radio page Real News. Here’s the first paragraph.

There were hundreds of Tennesse and said their displeasure with COVID-19 mandates has intensified, and it’s time for Lieutenant Governor Randy McNally to relent and allow a special legislative session so that the state can fight back.

Now, I know a few other senators maybe like Senator Roberts in particular, I believe. I know he wrote a letter calling for a special session saying that he would like to see these six things that he outlined in a special session.

Cunningham: The House is ready to go, It looks like.

Henry: And Senator Robert says that he wants to see the following things addressed if and when a special session has opened up. One prohibiting mass mandates in public building schools and universities. Two recognizing acquired immunity or immunity from nobody satisfying vaccine mandates.

Four, placing the county health departments of these six counties under the direct oversight of the General Assembly. Five challenging federal overreach exercises by President Joe Biden related to these vaccine mandates.

And six and finally requiring executive orders issued during a state of emergency lasting over 90 days to be reviewed by a joint committee.

But quickly before I kick it to you, Ben, I did find an interesting that Chris Butler in that first paragraph touched on how it’s time for Lieutenant Governor Randy McNally to relent. You think it’s all hinging on him, as they say?

Cunningham: I think he’s the kind of the figurehead of the roadblock at this point. But Randy McNally is a good guy. And I think any politician, you can lower their threshold of action by rising up and saying, this is what we want.

And it’s extremely impressive to me that so many members of the House have already said that. They have stepped out publicly. They are willing to say, we need to have a special session.

And a special session like you were saying there, it’s not just Randy McNally who came out with a press release and said, hey, we’ll fight the Biden administration through the DAs and the legal avenues. But this is also about state issues.

There are all kinds of things that we need to talk about, and it’s going to take a few days to talk about this to sort it out. And I think that’s what these legislators want, and I’m certainly in favor of it. And I would like to see them come together.

This is the top issue for Tennesseeans right now. I don’t know if there’s any question about it. And we expect our legislators to respond when people say, hey, you need to come to Nashville.

As our representatives, you need to sit down, develop a consensus like the Supreme Court says and many of the justices say. We can’t decide on everything. It’s up to the legislative bodies to be deliberative and develop a consensus.

I don’t think it’s a question that Randy McNally would come around and say, okay. Hey, I see this huge groundswell of momentum basically building for this special session, and I think he would probably relent if he did see that wave of support.

Henry: I found it interesting yesterday, Senator Janice Bowling, again, I’d highly recommend you go watch the live stream on somebody’s account to see the legislators that were there, what they said, and the addresses they gave.

But Senator Janice Bowling, in particular, made the remark that if the Tennessee General Assembly calls for a special session, there are no restrictions upon what they can and cannot consider while they’re in that special session.

And I don’t presume to understand all the mechanics behind how this works. So take what I’m saying with a bit of a grain of salt. But if the General Assembly calls for one, they can kind of consider anything and everything on the table.

Conversely, if Governor Lee were to call for one, it’s limited exclusively to the things that Governor Lee calls for. And I find that interesting because I know there have been several talking points or push back about this idea of Joe Biden coming out with these vaccine mandates.

And they’re ridiculous. And in my personal opinion, the disgusting nature of some of the things that he’s doing withholding these antibody treatments. We’ll get into more of that later, right?

Henry: But at a practical level in the state, I do wonder here what can be done with e of the vaccine mandate stuff. And I also wonder, so much of this deals with the schools, Ben.

I want to get into this more in the show, but I’d love to know your thoughts on if we call for a special session, what can we do to consider doing something with education?

I believe education should create an environment that empowers the students to continually fulfill their unique potential. But it should also provide families and parents with the decisions about how to educate their children properly, giving parents more parental choice, right?

Every student should have equal access to education on equal terms regardless of their zip code and especially now dealing with some of the math stuff or the vaccine stuff or CRT stuff or whatever that stuff is, parents need more choice. More on this later on in the show. We’ll be right back after this break.