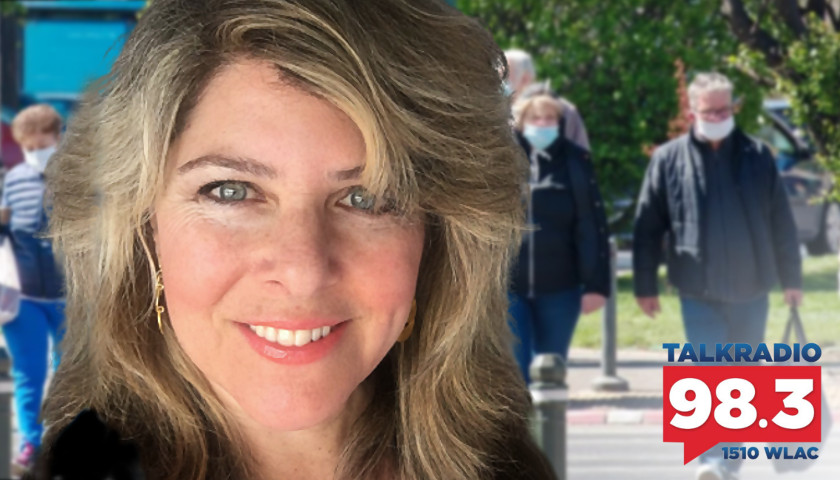 Precipice of Tyranny: Liberal Feminist and Author Naomi Wolf Sounds the Alarm on the Rise of Facism and Censorship in America

Live from Music Row Monday morning on The Tennessee Star Report with Michael Patrick Leahy – broadcast on Nashville’s Talk Radio 98.3 and 1510 WLAC weekdays from 5:00 a.m. to 8:00 a.m. –  host Leahy welcomed liberal, feminist, author, and freedom lover Naomi Wolf to the newsmakers line to talk about the rising tides of fascism in the United States.

Leahy: In studio, the all-star panelist Crom Carmichael. And on our newsmaker line, we are delighted to have an interview with someone I never thought I would ever have a chance to interview, Naomi Wolf who is a graduate of Yale and a Road Scholar, was an advisor to the 1996 Bill Clinton campaign and the 2000 Al Gore campaign. Turns out, I think we have something in common now. Welcome Naomi, thanks for joining us.

Wolf: Thank you so much for having me. Good morning.

Leahy: Well, your appearances on Tucker Carlson were just fantastic. You are a liberal, you’re a feminist author, a journalist, but you are decrying censorship and lack of freedom in America. Tell us a little bit about what you stand for and what the reaction has been to you.

Wolf: Sure. Well, I did go on Tucker Carlson twice, and I spoke about my concerns that we’re in a time of what I call Step 10 of the 10 Steps to Fascism. I wrote a book describing 10 steps to fascism 12 years ago, and we’re literally here at the precipice of tyranny. And it’s been coming for a while. But my argument, I’m trying to kind of warn people, and a lot of people are aware, they just want kind of more detail, that under the guise of what has been a real medical crisis our rights and freedoms are being suspended and withdrawn, and specifically about censorship.

All tyrants, censor. that is common in a police state, whether it’s on the left or on the right totalitarian or fascist. And I’m very concerned seeing the erasure or purging of conservative voices from social media. It’s not good for our country. Yes, I’m liberal, but we need a free America and we have First Amendment rights for a reason. And these private platforms are free to purge voices, but they’re purging conservatives. And then when I spoke up to unite across left and right and to reclaim America and to reclaim our Constitution, I was purged. (Chuckles)  So that was one of the things I was discussing.

Leahy: How surprised were you, Naomi, that you were purged when you started to speak up because you’re a very well-known American liberal thinker?

Wolf: Well, certainly it was more like shocked. And the thing about those kinds of suspensions. I was suspended from Twitter three times, from Facebook video, and on several platforms. They never really give you the exact reason. A nominal reason was medical misinformation. But I’ve been saying the same things and critiquing aspects of this pandemic advice, which I think is being kind of exploited by some bad actors like Big Pharma and Big Tech just for profit. I’ve been saying the same thing for a year.

So it was notable that only after I was on a national television show with well known conservative that I got booted. I’m very concerned. I mean, look, having studied closing societies for 12 years and warning about encroaching fascism for 12 years it’s not the first time I’ve been warning people about this. It’s just we’ve gone further than ever. And it’s more kind of Draconian-like. Massachusetts is under emergency law.

And also, once people start to be censored because of their political views, we can’t unite as a people against oligarchs. And basically, that’s what I see happening which is that the left and right are becoming really less important. And what’s really important is that we need to unite a kind of freedom against tyranny. We need to have these partisan discussions across party lines so we can mobilize quickly to regain our rights because there’s a certain point at which it’s really too late. And so when you start to have censorship, that becomes much less possible.

Leahy: Naomi, our all-star panelist here Crom Carmichael has a question for you.

Wolf: Oh, gosh, that’s a tough question. I’m glad you said ‘who hold office’ because there are many, many decent, patriotic liberals like me at a grassroots level who are just ordinary Americans and are horrified about what’s happening around them. No, I can’t. I confess I cannot name people on a national leadership level who are speaking out against the silencing of conservative voices. They should.

There’s a reason for that, which is these tech platforms are some of the biggest donors on the Democratic side. And I am a Democrat, right? Both parties have their big special interests like the Republicans have guns and fossil fuels. So they’re not speaking up against guns and fossil fuels. Maybe they should. But no, at a national level, I have not, sadly, heard other Democrats say this is not good for America.

It may be convenient that President Trump was banned from Twitter. It may be convenient that Ben Shapiro was told that he might be kicked off of Amazon servers. But that’s bad for America. And the other problem is, these giant tech platforms are private companies, so they can do that. So we really need to have a reckoning as Americans. And one of the dangers of lockdown is that we can’t gather in the town hall.

We can’t gather in churches, in synagogues, or even comfortably on the street in Massachusetts, where I live. Where there’s a nonsensical mask mandate and speak to our neighbors in clean public spaces. And I think that’s one reason, like the tech companies prolong lockdowns and are kind of behind some of these ridiculous policies to force us to wear masks to keep us out of gathering and assembling, which is our First Amendment because it’s a war against human spaces. Because in human spaces, we can say, look, let’s unite and talk about this and create other spaces to have these big civil conversations.

Leahy: Naomi, are you optimistic or pessimistic about our ability to stop this movement as you describe, toward fascism in the country?

Wolf: Well, I’m very, very worried. I mean, it depends on us, right? We don’t have much time. I do see more and more awakening. I do see more and more people across the divide that are not sleepwalking into whatever Dr. Fauci says we ‘have to do.’ I do see parents across the political divide very upset that their kids have been out of school for a year or are forced to wear masks in school for no good reason.

There’s nothing I can do to take the masks off kids’ faces or off my own face. I risk a fine walking outside by myself if I’m not wearing a mask. That’s what tyranny looks like. We have no time at all. And I’m really glad we’re having conversations like this because we all have to literally rise up peacefully and start doing a bunch of things, including running candidates at the state level to reclaim statehood and ban emergency measures.

Leahy: Naomi Wolf, American Liberal, author, supporter of freedom. Thanks so much for joining us here today on the Tennessee Star Report. Will you come back?

Wolf: Anytime. Thank you so much.

Leahy: We appreciate your coming on.