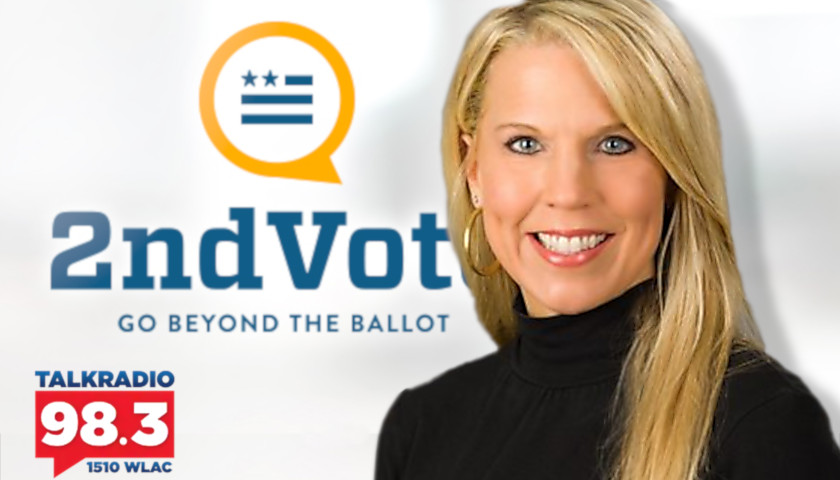 Live from Music Row Friday morning on The Tennessee Star Report with Michael Patrick Leahy – broadcast on Nashville’s Talk Radio 98.3 and 1510 WLAC weekdays from 5:00 a.m. to 8:00 a.m. –  host Leahy welcomed the executive director of 2nd Vote, Amy Wilhite to the newsmakers line to talk about 2nd Vote’s growth and their new affiliate 2nd Vote Advisors citing some news on their site as woke corporations step back.

Leahy: We are joined on our newsmaker line now by our good friend Amy Wilhite of 2nd Vote. Good morning, Amy.

Wilhite: Good morning, Michael. How are you doing this morning?

Leahy: I’m great. So 2nd Vote Advisors, your affiliated group, has done a lot of advertising. Second Vote, which rates corporations, has been pretty busy as well. What have you been up to the past couple of weeks?

Wilhite: The advisors’ group is that the for-profit side. We actually supply the research for that. They license that through us. And so they’re doing a lot of great work right now. You’ve probably seen them on Fox Business. Andy Puzder has done a lot of advertisements and commercials on Fox News and different things.

Dan Grant was on last night. So yes, they’re doing great stuff. And you can find more information about them on 2ndvoteadvisors.com or 2ndvotefunds.com. Just great stuff. They have two ETFs that are doing really well better than the SMP 500. And so we’re happy to supply the research for them to create those EPS.

Leahy: It seems like to me, Amy, every time you turn around, there’s another woke corporation doing something stupid. Tell our listing audience again what 2nd Vote does and why it’s important.

Wilhite: Yes. 2nd Vote, the nonprofit, which is what I work with and I’m the executive director for is we research companies. Basically anywhere where you spend money. Whether it’s on the charitable side, the retail side of the investment side. And we score them on six different issues that are most important to Conservatives.

On life, First Amendment, Second Amendment, education, the environment, border security, and immigration. And when we say environment, it’s like over-regulating, overregulation, and too much government control.

We’re for good environmental issues and taking care of our country and our earth, but not overregulation. So that’s just to clarify that. And of course, we’re pro-life First Amendment. We’re actually kind of changing that soon to an issue called basic freedom with everything that’s happened with the cancel culture of this world.

And just like a mask issue, do we have the freedom to wear a mask or not wear a mask? Some of those things have just been taken away like going to the church and those kinds of things. We’re going to kind of broaden that First Amendment scope.

And then also Second Amendment, obviously, pro-gun carry, pro-guns, education, and school choice. We’re for that. And then also border security and immigration. Just follow the laws about what’s already in place and no sanctuary cities and those kinds of things.

So anyway, those are our six issues. We score companies and where they’re giving their charitable dollars. We rate them on the score from one to five. One being left, far left and five being right conservative, and then three being neutral.

And we really want companies to just be neutral and to stay out of the culture wars, to quit being so divisive and know that when you’re buying a cup of coffee that’s what you’re getting. So we score that. We put our research out there and put our scores out there, and so anyone can look at our research and look at what we’re doing and then base their shopping habits on the scores.

We’re really trying to get people to be more aware of where their money is going. You wouldn’t vote for a candidate who’s going to be for those things that you’re not for. Why would you go shop somewhere at a place that doesn’t match your values?

Leahy: That makes a lot of sense. How big is your research team to support all this Amy?

Wilhite: It’s has grown by a lot, but we’ve got about five in place, and then we have a whole advisor group that kind of handles that and overlooks that, too, as well. We’ve grown a ton here recently with more part-timers. We’ve got volunteers and then we’ve got the advisor side. As you may know, it takes a lot of time to look at 990s which is what we do. We look at it.

Wilhite: Exactly. So our research team will look at that, see where the money is going. We also look at their public stances and maybe some of the CEO statements that come out. We look at indirect donations, direct donations.

We look at a lot of different things to come up with that score and make it really simple. We have an app that folks can download, and it’s free, and it’s not in the App Store. It’s not in a Google Play store, but it is on your browser. You can just go to your phone and add the app to your home screen. Very simple.

You’ve got information on the human rights campaign, United Way Guide, Planned Parenthood, Southern Poverty Law Center, and Black Lives Matter. The United Way guide. Tell me about that, because that’s very interesting to me.

We let them know that we were doing this, and we were putting this information out there. And since we’ve been doing this, the chapters have dropped to about 55 or 54 chapters that are giving to Planned Parenthood. So it has dropped.

And we feel like our work is making a difference because there are not as many doing that anymore. If you’re giving to United Way, you can look on our website and see exactly which chapters are giving to Planned Parenthood. It’s kind of similar to the other guide that we have there.

There’s an everyday shopping guide that you can check out where you should grocery shop. Which ones score a three to a five. And again, four and five is a conservative side. And we applaud that. We are a conservative research group, but three is good. We consider that good. If it’s a three, it’s neutral. And that’s a good score, too. We’re not saying to only shop at four and five but get to those that are three as well.

Leahy: I noticed also, you have a very interesting story that you posted on your website about a technology firm called Base Camp. They’ve been in the news of late. In April, they announced a new policy requesting that employees not discuss controversial issues on the company-wide communication platform.

So that was praised. About a third of their employees quit because of that. Then here’s a very interesting situation. Last week after some of its disgruntled employees threw a fit during a conference call when Ryan Singer, the head of strategy at Base Camp, pushed back on claims that the company and society as a whole had been a ‘white supremacist culture’ and an employee attacked him for being a ‘white male.’

Shortly afterward, the company’s leadership suspended Singer place some under investigation. In response, Singer resigned. This is funny what you wrote at 2ndvote.com. ‘One cheer for a Base Camp trying to do the right thing, but firing a top employee for standing up to other staff members who push leftist values is unacceptable.’

Are you seeing a lot of that a lot of allowing left-wingers to rant all they want in corporations? But if you push against it, as was the case in Base Camp, you get fired.

Wilhite: I think we all see that you see it all the time, and people live it with what they do in their job. Sometimes they’re afraid to even speak out on things, and you almost get punished if you want to step up for what you might believe if it’s on the right side.

It’s happening all over. And that’s another thing that we do have. Just like you see in the Base Camp article. We put out blogs each week and a lot of it’s what’s going on and things that would be of interest here. But also we’re trying to also be positive and show some of the things that are going on that are also positive.

A lot of the companies are walking back from some of the liberal stances. Especially on the Georgia election laws. A lot of companies came out bashing that and then stepped back recently. I know Pfizer stepped back. They kind of decided at a board meeting when someone was asked, well, we’re going to stay out of that.