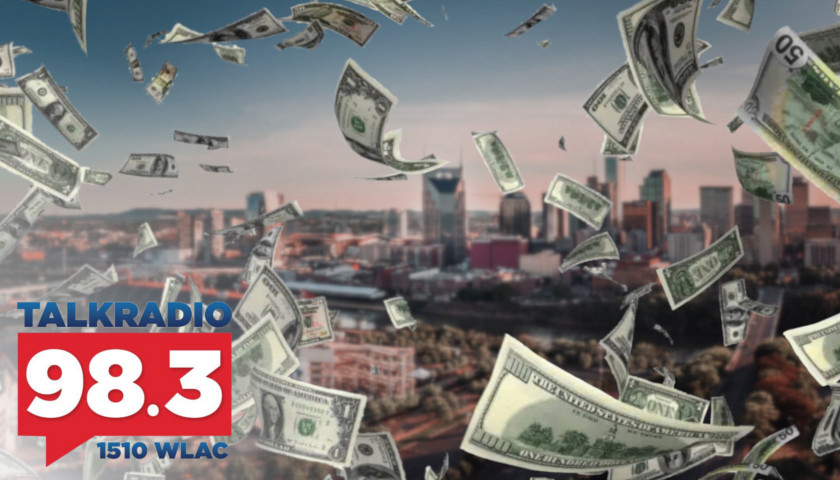 Leahy: In studio with us, Metro Council member at large, Steve Glover. But Scooter has a weather update for us. Lots going on out there. Scooter, Speaking of troubled weather and storms, there’s a fiscal storm going on in Nashville. It has for some time. We’re talking about that here with Steve Glover, Metro Council member at large, The Wall Street Journal pointed it out in a devastating article that is entirely counter to the way that Mayor Cooper presented the State of Metro on Thursday.

Leahy: Let’s stop and talk about it. Let’s be clear about how this works so our audience can understand. On Thursday, it was a press conference. Yackety yack.

Glover: Thursday was the State of Metro right at that point. And I’ve not known this to be the case that once the Mayor hands the budget over it’s the council’s budget.

Glover: And I didn’t see it handled that way number one.

Leahy: Part of the State of Metro is to present the budget. Correct?

Glover: Well, you don’t know. Not necessarily. Normally, once the State of Metro is completed, then they come in with the budget. But they waited a day and just said there wasn’t enough space. That’s malarky. Malarky. They could have adjourned upstairs, come down to the Davidson Ballroom, or whatever where desks were already set up for the Metro Council.

And they could have done a budget and a Council meeting and gone ahead and done it. They just chose not to. It’s just another way the legislative body just keeps giving up more and more power to the executive branch. And The Wall Street Journal article that you first started talking about in this segment is exactly right. And this is why we’re in the predicament we are in right now because the executive branch does whatever the heck it wants to. And the legislative branch says okay.

Glover: Doh dee-doh dee-doh… And they can get mad at me all they want to. I don’t care, because, you know, the thing that drives me the craziest is we are elected by the people who represent the people, and they have abdicated that to one office downstairs in the executive branch. The legislative branch, our forefathers had a great reason for the way they set up our Constitution and the way our government is supposed to work in America.

The Wall Street Journal article talking about Nashville being one of the five worst cities fiscally it should have been, and I think the article pointed it out, we should have been literally at the crest of being the best because we had every opportunity in the world.

Leahy: Nashville has everything going for it except for a very bad, reckless Metro government.

Glover: Yep. And as I said on Tucker Carlson about six months ago, whatever it was, it’s a lack of leadership. That’s our problem in Nashville. A lack of leadership. And whenever you have that kind of void, this is what happens. Oh, well, just like you’re talking about the American whatever, blah, blah, blah. They give them all these names and whatever.

Glover: In my opinion, it’s beyond wasting. And we’re not really focusing on where we need to be spending the money. The Wall Street Journal was exactly right. They come out last week and they said, oh, no, we fixed it. Everything’s golden. No, it’s not. Don’t think it is. And I’m not saying the sky is falling, the sky is falling. I’m saying that it’s raining pretty hard outside and you better get a frigging umbrella.

Glover: Well, the op-ed. So what they’ll talk about on that is that they fixed that and they’ve removed one point one billion dollars off of the financial sheets because they’re going to shift everything to this Medicare advantage thing. So we’re going to move it from the local government to the federal government. Yeah, that will fix it.

Glover: So way to go, Metro. Oh, my gosh. You guys are just tremendous.

Leahy: This is very much how Liberal Democrats pretend two ‘solve problems.’ They just move the accounting for it from one side to another side or try to.

Glover: Let’s make sure we give credit do where it’s supposed to all be given. Don’t forget now and I think it was last hour or whatever you were talking about the George W. Bush thing.

If you’re 65 plus, you have to go on Medicare Advantage. That means now you will have to take Medicare Part B, which is 136 or 140 or whatever it is a month that you’ll be required to pay. And so what my question is, well, okay, if you’re doing that and how much are you still going to have to pay off the insurance? I know people grind the axe on the Council members, but you got to talk about the retirees. We’re talking about folks who gave years about years upon years upon years of service.

Leahy: And there’s unfunded healthcare liability for those retirees.

Glover: Yes. And there is across the entire country. It’s not anything unique only to Metro.

Glover: Well, it’s because we like to buy new, shiny toys every Christmas, as opposed to buying one toy every Christmas and making sure the toys we bought in the previous Christmases are kept operational, functional, and serving the purpose.

Leahy: This budget document you’re talking about that was not presented along with the State of Metro address, but was delivered separately.

Glover: Friday. It always is. That’s the way the bill is always filed on Friday.

Leahy: So it was delivered on Friday. And this is for what budget period?

Leahy: And when does that begin?

Leahy: July one of this coming year?

Leahy: Now, how many pages is this budget?

Glover: I don’t know the number on the orders.

Glover: You got to look at the budget book. The ordinance only spells out the legalities.

Leahy: The budget then.

Glover: The budget book typically is about 1,000 pages.

Leahy: Are you going to read every page of that?

Leahy: That’s a lot of work.

Glover: I always do that. That’s what I do.

Leahy: You always do it. How many Metro Council members read the 1,000-page budget book?

Glover: I don’t know. I mean, you could ask each one of them. They could tell you whatever.

Leahy: So after the Mayor submits the budget, it goes to a committee in Metro?

Glover: It goes to the whole Council. The Budget and Finance Committee, which I’m a member of, we will take it, and we pretty much so do what’s going to be the hearings. But what I found most interesting is this year our chair, and look, she’s a nice person. Nothing personal here. It’s just the fact that only going to be one substitute. You can do amendments, blah, blah. Once again, we’re abdicating our responsibilities.

Leahy: So let me ask you this. The Budget and Finance Committee of Metro is very important. And you’re a Metro Council Member-At-Large.

Leahy: But you’re not the chair of the committee.

Glover: No, I’ll never be the chair. If I was the chair, we’d start fixing things.

Leahy: You’re not the chair of the committee because…

Leahy: Who picks the chair, the vice Mayor, the Vice Mayor. And how many people are on the committee?

Leahy: I think you’re having a meeting today?

Glover: Yes. At four o’clock. Four or four-thirty. Something like that.

Leahy: Tell us what is going to happen in that meeting.