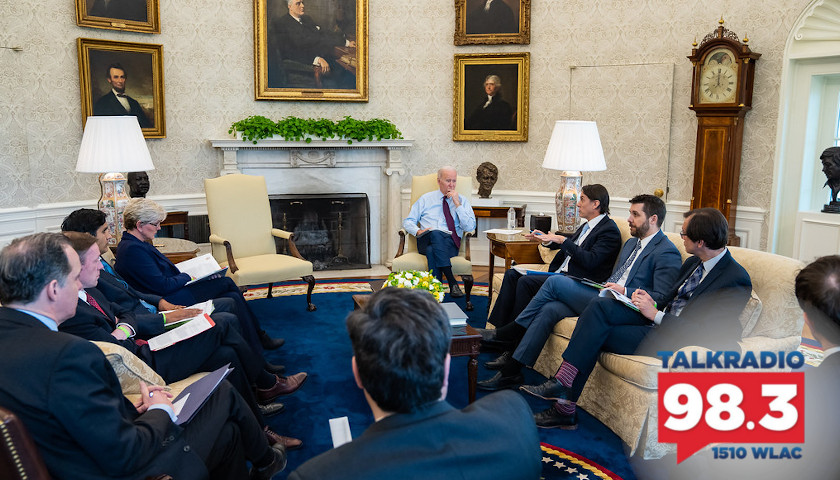 Crom’s Crommentary: Democrats, the Party of Billionaires and White Elitists Who Rule by Force

Michaelm this commentary is not about any particular thing that’s happened. When you look at all the things that are happening that are inspired by leftist thinking and then you see what the results are, you begin to recognize that the way the Left thinks and the way they want to organize the world is through pure force.

And even when things don’t work exactly the way that they expected, or in fact worked out to be exactly the opposite of what they say, they continue with the idea of force.

There was a testimony yesterday; I don’t know the name of the female professor from one of the universities in California, and she was testifying before a Senate committee over Roe v. Wade.

It became clear that she thinks that a man can identify as a woman and if you don’t then call that person a woman, just by the fact that they identify or vice versa, that somehow you are encouraging them to commit suicide.

She wouldn’t answer Senator John Cornyn’s question about whether or not a baby the day before birth has value. It took her two full seconds to answer the question, does a baby that has been born alive have value?

She had to really think hard about how to answer that question. And so you see that the Left’s value of life is determined by their view and their view alone. Now, you also see now evidence around the world where ESG, especially on renewable energy, is destroying entire countries and rendering some populations to possible famine.

Tucker Carlson last night talked about Ghana and what they’re doing in the Netherlands, and talked about Sri Lanka. These are countries in the case of Ghana and Sri Lanka, they used to be able to produce 100 percent of their own food.

In the case of Ghana, they exported food to their neighboring countries. Now they are experiencing it, without a great deal of international help they’ll have massive famine.

But yet the Left continues to think that ESG and renewable energy is the key to world order. This is fascinating. In St. Paul, the voters up there, last November, 53 percent of the voters voted for rent control in St. Paul for all rental property and put a cap of 3 percent a year. Since then, the number of permits for multifamily housing has dropped 82 percent – has dropped 82 percent since the voters voted for that. In Minneapolis, which voted in rent control, but left the rent control up to the city council, which hasn’t acted, the multifamily permits are up 68 percent, right across the river.

Now, you would think that the Left or that a rational person would recognize that this was a bad policy, because the Left in St. Paul says we need affordable housing, so therefore we need to control rents.

Well, if you try to control rents, especially in an inflationary environment, you’ll end up with no new construction or virtually none. And so that’s what they’re doing.

Then you see how the justice department can’t bring itself to do the job that it’s supposed to do, yet it somehow has the time and the money and the resources to launch an investigation into the PGA as a potential antitrust violation, and side with the Saudis.

Which is just amazing to me, but not surprising. Then we learned that Biden, in the bill that did pass, it had a giant provision in there for the Biden administration to bail out unions where their pensions are not adequately funded.

Now, they’re not adequately funded because they’ve been mismanaged. So what does Biden do? He takes all the people who are not members of a union and requires them to pay for the bad decisions and bad judgment and probably corrupt judgment by the people who run the unions.

Then you have New York State, where the Supreme Court ruled that their gun law is not constitutional. So they just passed another law in New York State that is equally unconstitutional. But they’ve essentially stuck their finger in the eye of the way that we conduct ourselves.

And then the last one that I have that’s just funny is Joe Biden and the whole Biden administration’s view on minorities. They think that black people, as Biden once famously said, if you don’t know how you’re going to vote, you ain’t black.

Meaning that that’s what he thinks, that black people are just too stupid to decide what’s best for themselves. And then you have Jill Biden, who goes down to San Antonio, and according to Hispanic newspapers, the way that she characterized Hispanics was she said, the Hispanic journalist said, we’re not tacos, don’t call us tacos.

And she couldn’t even pronounce the words properly. She called a bogada, which is a bodega, which is a convenience store in New York. It’s a bodega. She called it a bogada. And so she’s reading off of a teleprompter.

And the Hispanic community, by the way, is picking up on all this, as is the black community. And I think what you’re going to see in the midterms is how the Democrats are just making a complete hash of themselves, but what they are showing is that they truly are a party of billionaires and white elitists. And that’s what drives and motivates them.