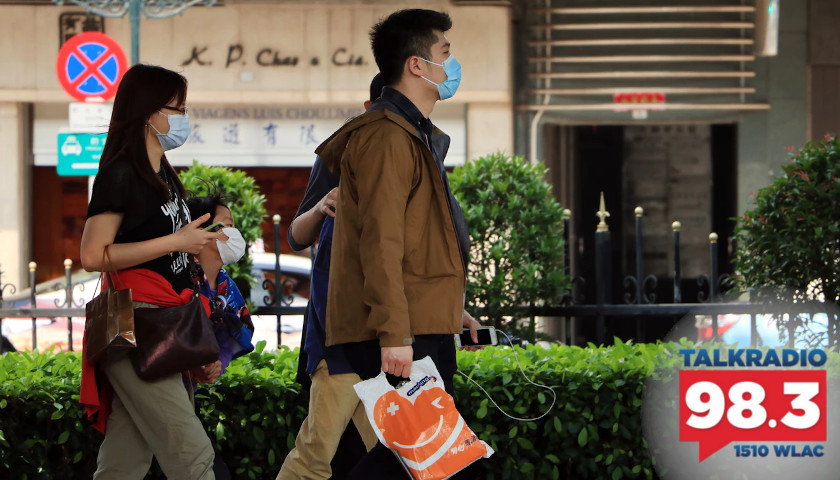 Live from Music Row Tuesday morning on The Tennessee Star Report with Michael Patrick Leahy – broadcast on Nashville’s Talk Radio 98.3 and 1510 WLAC weekdays from 5:00 a.m. to 8:00 a.m. –  host Leahy welcomed all-star panelist Clint Brewer to the studio to discuss the mask mandate confusion and why people are still wearing masks even after vaccination and changing guidelines.

Leahy: We are in for a treat this morning. In studio with us, all-star panelist, recovering journalist, and public relations expert Clint Brewer is in studio. Good morning, Clint.

Brewer: Hey, good morning, Mike. How are you?

Leahy: Confused about the mask mandates. Am I alone in that?

Brewer: No, you’re not. I saw something on social media. I thought it was really interesting. Somebody said that masks have become the left-wing of politics in this country’s equivalent of the MAGA hat. Which is like a declaration of your beliefs. (Leahy laughs) Except that the mask actually has medical significance in the MAGA hat is just a hat.

So it’s become an extension of people’s beliefs. And I got to say that the hype of the pandemic I wore a mask, I follow the rules. But now I’m not really sure what the rules are. I know that we’re not supposed to have to wear masks s if you’re vaccinated. But I sure get a lot of dirty looks for not wearing them.

Leahy: Well, you think it’s because you’re not wearing them, you get the dirty looks, but it might be something else. I don’t know.

Brewer: It could be.

Leahy: I know. In my case, it’s not just the mass sometimes. I don’t know where all this stuff is. My view has been that the science, it doesn’t support the masks. In fact, I think there was one study Tucker Carlson said that they might be more harmful than not. But again, I’m not not a scientist and I don’t play on on TV.

Brewer: I subscribe to the theory of call on God, but roll away from the rocks. (Leahy laughs) So my attitude is, well, I’m not a scientist. I’m not really sure. But if wearing one gives me a little bit better chance of making out of the pandemic unscathed that I’ll just wear one.

Leahy: And clearly, the polling shows that the public has supported the wearing of masks. It’s like 60% to 40 percent.

Leahy: It’s symbolic. At least you are doing something.

Brewer: The problem is, is it’s become a symbol and that’s the issue. It’s supposed to be a functional medical necessity during a very difficult time in American and world history. But now it’s become a thing where people are continuing to wear them and continuing to use them even when they don’t have to.

And businesses are enforcing the use of them, even when Joe Biden himself is telling you that you don’t have to wear one if you’ve been vaccinated.

Leahy: The Center for Disease Control has said they’re lifting the mask mandate if you’ve been vaccinated.

Brewer: Even indoors and in crowds.

Leahy: Okay. But, they also said that you must wear masks in schools. So again, for the balance of this year and then this academic here. Schools have been inconsistent. And, by the way, the science is kids are not really at risk.

Brewer: No, not really. I mean, they are, but they aren’t. Like they can get it and it be very symptomatic. There are other cases where it hasn’t been.

Leahy: So in Williamson County, they said, well, we’re going to wear masks for the rest of the school year.

Brewer: It’s most of the school systems in this area.

Leahy: Except for the balance of the year, it’s almost over. It’s Friday. But in Metro Nashville, kids will continue to wear masks for this school year and indefinitely thereafter. At least that’s what we’ve been able to, ascertain in a story by Corrine Murdock. They’re interpreting it differently in Metro Nashville.

Brewer: Well, I think you’re probably going to see some pushback from members of the school board. I wouldn’t be surprised if our colleague and friend Fran Bush has something to say about it.

Leahy: The one member of the Metro Nashville Public School board who will come in studio and talk with us.

Brewer: I understand the abundance of caution, but at some point…here’s the thing that I don’t get. If during the height of the pandemic, we were all asked to believe the science, which I will freely admit I did. I bought into it and I’m glad I did.

Brewer: I don’t get it. I don’t get it because I’m sick a wearing a mask, and I’ve been vaccinated. And I’m going to the grocery store on Saturdays, and it’s still full of people wearing masks. And now I’m getting the side-eye from people.

I’m like, look, I’m doing what I’m supposed to. If you want to keep wearing that thing, go ahead. But that period is over. And so Biden said, look, he said that you got two options, wear a mask or get vaccinated. Of course, the third eye options not to do either.

And there are plenty of people doing that. But guess what? We’ve now entered a period with the pandemic where we’re back to personal responsibility. It’s on you because let me tell you, in Tennessee, it is easy to get a vaccine.

I’ll say this about our state government and about our hospital system and about our health care system in this state. It’s very easy to get a vaccination.  There is no barrier unless you have a transportation problem. And I think even then…

Leahy: You can call up the Health Department and somebody will probably come and get you.

Brewer: You can get a Lyft or an Uber paid for in many cases by the government.

Leahy: I think you nailed. The whole mask thing is a symbol of what your political ideology is right now.

Brewer: Which is ridiculous and that obscures the whole point of the thing to begin with.