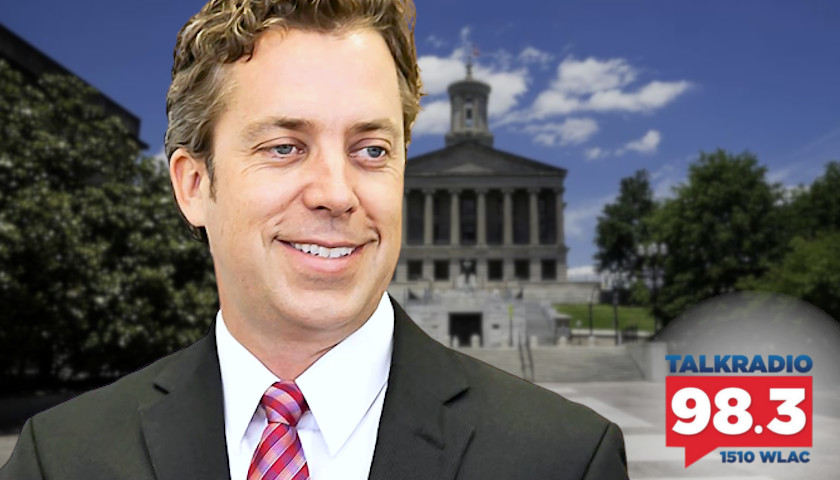 Mayor Andy Ogles Tells Tennessee It’s Time to Take a Stand: We Are in a Cultural War, Spiritual War, and Political War

Live from Music Row Tuesday morning on The Tennessee Star Report with Michael Patrick Leahy – broadcast on Nashville’s Talk Radio 98.3 and 1510 WLAC weekdays from 5:00 a.m. to 8:00 a.m. –  host Leahy welcomed Maury County Mayor Andy Ogles in the studio to weigh in on the recent rogue staff situation at the Department of Human Resources that has quietly implemented equity and inclusion councils across the state agencies.

Leahy: In studio or very good friend, Maury County Mayor Andy Ogles. Andy, our top story at The Tennessee Star today follows up on this rogue staff at the Department of Human Resources that’s decided on its own without telling the Tennessee General Assembly or apparently the governor, that they’re going to set up equity and inclusion councils all across the state of Tennessee and every state agency.

And we’ll get to that in a bit. Apparently, they’ve implemented it. Here’s what State Representative John Reagan, who is the chairman of the Government Operations Committee in the House said. This is, according to our lead store at The Tennessee Star. He’s formerly asked the Tennessee Department of Human Resources, the Commissioner there, Juan Williams, to explain the Diversity and Equity Council program he wants state agencies to enforce.

In the letter, Reagan requested that Williams justify his actions in a timely manner and explain how much it will cost taxpayers. Reagan told The Tennessee Star that Williams and members of his staff acknowledge receiving the letter, but they’ve yet to formally respond. I’ll give you this quote and see what your thoughts are.

This is from State Representative John Reagan, the chairman of the Government Operations Committee in the House of Representatives. “My concerns about the Diversity and Equity Council will fall into two categories. First, I want to know whether this is an internal policy that is only going to affect people inside their Department or if it is going to affect people outside their Department.

My concern there is because I chair the Government Operations Committee. The second thing of concern to me is I did not see anything related to cost. What is this going to cost in terms of expenditures of doing training or having meetings or whatever they’re going to do? And then does it take away also from their doing of their current jobs?” What’s your reaction to that?

Ogles: Well I think you start at the beginning of a rogue employee. I don’t buy into that. I just don’t. This is now the third Commissioner who allegedly has gone off-script. And at some point, you’ve got to sit down with your commissioners and give them a clear direction and tell them this is how I expect you to govern. And so this is unacceptable. And Commissioner Juan Williams should resign. This does not reflect Tennessee values. And at what point are we going to have faith that our government is actually representing Tennesseeans and not representing some agenda from the left?

Leahy: It sounds like an agenda from the left. And the commissioner is making it appear that Governor Lee endorses this agenda from the left. They had a meeting yesterday, apparently. Now, to me, since this entire program, and I’ve got some more information. It has already been implemented and I’ll give you some of those details on it. I don’t see how one, Williams can stay as Commissioner having misled the Tennessee General Assembly on this program.

Ogles: Of course not. The Commissioner is working at will for the governor. You can be fired at any time. We’re a right-to-work state. But there’s the cause here. End of story. How much it does or doesn’t cost to the Tennessee taxpayer is really a moot point. The bigger issue is this isn’t California. This isn’t Washington and this isn’t Oregon and this isn’t New York.

Anecdotally I had a board meeting yesterday and it does a lot of nonprofit good stuff. But it’s a quasi-state board. It’s for a regional thing. And the federal government had pushed down some language that they ‘recommended’ that we insert into our bylaws. And one of those words is that as far as the discrimination clause is that we won’t discriminate against transgender individuals.

Well, hold on a minute. That hasn’t fully been adjudicated in our courts. And by inserting that into the bylaws, now if you have a situation where a man wants to use the bathroom with a little girl, you can’t tell them no.

Leahy: That is about as crazy as you could possibly get.

Ogles: But I refuse and I object to it. And we did not amend our bylaws to reflect that. And at some point, if we have to, we go to court over it. But this has got to stop. These agendas being pushed down by the federal government and the media. Tennessee needs to be a firewall state. It’s time. We’re at war. We’re in a cultural war. We’re in a spiritual war. We’re in a political war. And buckle up, Buttercup, because it’s time. And we’ve got to start taking stands in Tennessee. Tough stands. And this is emblematic of what’s happening across the country.

Ogles: I don’t think they expected it to get out. And then suddenly they got caught red-handed with their hand in the cookie jar. And so here we go.

I don’t know where the budget was approved for that. I don’t think there was any budget for that. In which nearly 300 employees attended to share their feedback and thoughts. In addition to the subset of the population who attended, 186 employees also participated in an optional session survey after each listening session. Here’s what this resulted in.

They need more opportunities for listening sessions, education on listening skills, more diverse recruitment teams, more advocacy to diversify teams, and more community outreach efforts. Now, this program has been implemented, according to this document across the state of Tennessee, without the knowledge, apparently, of anyone in the Tennessee General Assembly.

Ogles: Well, again, I can see how the General Assembly would be unaware of some of the things that are happening in government buildings because they’re part-time legislators. Obviously, there should have been some disclosure during the budget sessions, but I go back. You said 300 and 186 participated. So almost 500 employees participated.

Leahy: 300 participated and were in the listening session. This is just in the Department of Human Service. One of a dozen or so departments. And then 186 and filled out surveys after that participation.

Ogles: We’ve got hundreds of employees that participated in this and you’re telling me that somehow someway this didn’t get back to the governor.

Leahy: I’m not telling you that. I’m just saying it happened. It didn’t get back to the Tennessee General Assembly.

Ogles: And so, again, my question is, where are the governor’s people engaging with his respective departments? I mean, you have over 300 employees that are participating in that and someone didn’t call in? This is ridiculous.

Leahy: That was back in November by the way.

Ogles: How about you have fewer meetings with Bill Gates and Mark Zuckerberg and focus on the business of Tennessee. I’m really troubled by this. This is, again, emblematic of what’s been going on with this ‘third-row commissioner’ in about six months with this administration.

Leahy: So the other rogue commissioner, Penny Schwinn who did this debacle of the well-being checks, that was her idea. They stepped back and stopped that. Who was the other one?

Ogles: So the other one and not a lot about this has been discussed in the media, but you have the former Commissioner of Veterans Affairs who had to resign from office due to a scandal within that department.