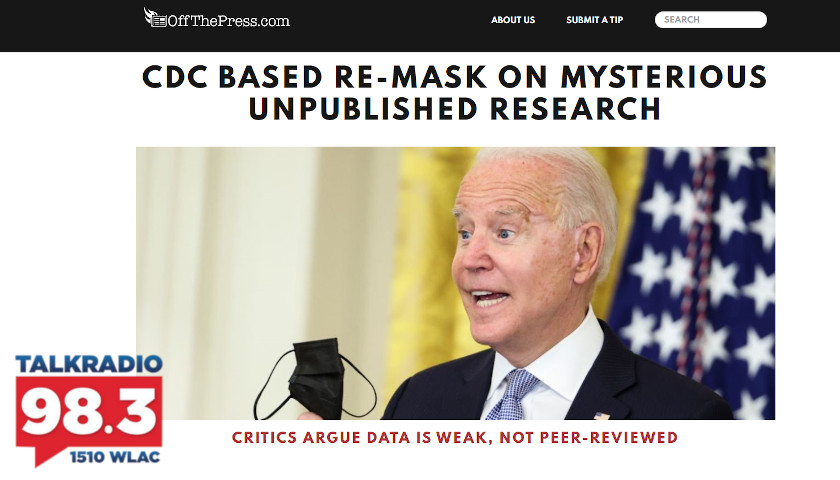 Live from Music Row Friday morning on The Tennessee Star Report with Michael Patrick Leahy – broadcast on Nashville’s Talk Radio 98.3 and 1510 WLAC weekdays from 5:00 a.m. to 8:00 a.m. –  host Leahy welcomed news veteran and editor Joseph Curl to the newsmaker line to discuss his time with Drudge Report, keeping news fresh, and his new news aggregator site Off the Press.

Leahy: We welcome to our newsmaker line, a great journalist, Joseph Curl. He covered the White House for The Washington Times from 1998 to 2010. He was the Drudge Report morning editor for four years.

And now, as a friend of our own Star News Network and The Tennessee Star, we know about him because he just launched a competitor to the Drudge Report, known as offthepress.com. Good morning, Joseph Curl.

Curl: Good morning, Michael. How are you?

Leahy: We’re delighted to have you on the program here. Tell us for our listeners the big question. You ready? What happened to Matt Drudge?

Curl: That is a great question. That is the $100,000 question. I’m sure as your listeners know, Matt is a reclusive, mysterious guy. So nobody really knows and there’s no way to know.

But there are a couple of theories out there. One is that he sold it to somebody with deep pockets who’s rather liberal and wants to take the page in a different direction. Hence his endorsement, basically, of Joe Biden in the 2020 campaign. But, you know, there are other speculations.

He used to go to the White House and meet regularly with Trump and his inner circle. But that ended. And some people say that he had a big falling out with Trump or one of the members of the inner circle and he just decided to go against the Trump people.

But nobody knows. Because it’s just him and maybe one other guy who’s running it, there’s just nobody who really knows what’s going on there. His politics changed.

Leahy: You were the morning editor there for four years. When did you do that? And what was that like?

Curl: I did it from 2010 to 2014. It was amazing. I tell people it’s like the movie The Matrix. It’s like plugging into The Matrix every day. When I covered the White House, I had to try to know everything that was happening in the world.

When I ran the Drudge Report, I had to know everything that was happening on the Internet, and that’s an awfully big place. So it’s pretty intense. I would do five to six hours shifts and you get done with that, and you got to go lay down and you’re done for the day. You’re spent.

So it’s a tough job. But that’s what we’re doing again at Off the Press. One of the reasons that we also created this is Matt Drudge is either running it by himself or just with a skeleton crew. But that page doesn’t change very often. When I was there, we had three people on three different shifts, and the page was really dynamic.

We were throwing up 50 stories in a five-hour shift and taking down 20 or 30 stories. And everybody did it all the way through the whole day. Now the page, you can check it in the morning, you check it in the evening, it’s exactly the same. So at Off the Press, we’re going to do that old page. We’re going to be changing. We’ve got three great editors, including Paul Bedard, who’s a great veteran journalist in Washington from The Washington Examiner.

He’s going to be running it as well. But we’re going to be changing that page non-stop. So people can check back 10, 20 times a day and they’ll find a new page when they come on.

Leahy: That’s exactly what we noticed at The Tennessee Star and The Star News Network. We see the velocity of stories matter a great deal because it used to be a 24-7 type cycle. 24-hour cycle. I don’t know. What do you think the news cycle is now? Is it three hours or six hours?

Curl: Oh, yeah. It is very short. And that’s one of the problems, too, is that I think a lot of places don’t really follow up. The news cycle is so fast that things come and go and there’s never any look back on things. That’s something we’ll do at Off the Press too.

We’ll look at trends and figure out what these things mean. I mean, this constant flow of things happening and reports emerging on all these things, but then they just disappear. But you’re right. I mean, that cycle is down to five-six hours at least.

Leahy: Exactly. We noticed that at The Star News Network. As you know, we’ve got eight state sites. We’re about to add a ninth in Wisconsin. Keeping those sites fresh with breaking news 24 hours a day is a challenge. And so I feel your pain on keeping up with stuff.

Curl: (Chuckles) Well, yeah. And you guys do a great job. One of the problems with the flow of news nowadays is this fire hose of news, is that people are getting hit with it from all over the place.

They’re getting hit whenever they turn on the radio or TV. And the Facebook feed is just a constant flow. And what they don’t have is what used to happen in the old days with newspapers. And for you on your radio station, you have an editor.

And the editor decides what goes where and what goes on the front page, what are your top stories on the radio. Right now there’s no place for that on the Internet. I mean, you need a good aggregator that can say, hey, look, these are the top 50 to 75 stories you really need to know about.

Our idea is going to be: if it’s not on our page, you don’t really need to know about it. If it’s on our page, it’s an important story. We’re going to literally edit the Internet and give you what you need to know.

Leahy: It’s interesting you say that because, during the period from 1999 to maybe 2017 to 2018, people would go to the Drudge Report for that. But now things that matter to me and matter to our listeners, there wasn’t – until you launched offthepress.com – there really wasn’t such a place and people like that. I think a lot of radio talk show hosts, my guess is they are flocking offthepress.com. Are you seeing that?

Curl: We’ve had a remarkable surge. We just opened up on Monday, and we’ve got a thing at the bottom of the page. It says: sign up for a newsletter. We’ve had 5,000 people sign up for the newsletter already.

Curl: That’s remarkable. We’re getting a flow of people. Just like you said, one of the things that I know people did – because I know a lot of people in radio as well – They used the Drudge Report as the old term of a tip sheet. It was like it was full of all these things that you could go on there and go, hey, that’s a cool story.

You look back 10 hours later and it’s the same page. It’s like, so it’s not as dynamic and probably not as useful as a tip sheet for you radio guys or for all these news guys looking around out there.

But that’s the other thing: in that fire hose of content that’s flowing, so much of it is coming from the left. I mean, you get it from even your local TV stations. But network TV you get it from, and cable news and all of the news outlets, newspapers, and radio. Most of it’s liberal.

Leahy: I can see your good judgment in story selection because I notice that you’re linking to one of our stories on The Star News Network at the Minnesota Sun. (Curl chuckles) Minneapolis officials try to overturn court mandate time, more cops. That’s the kind of stories that you can go to offthepress.com, you can see there. And it’s not being pushed out in these other areas.

Curl: Yeah, that’s right. And when you think about it, it’s remarkable because half of America is conservative and they have been for years and years. Every election, we’re almost tied, and somebody barely wins.

And the left half has certainly got an awful lot of control over news outlets and even social media. Places like Twitter and Facebook and Google. But that other half has a really difficult time finding the stories that they want to read.

So that’s going to be our other big goal. And using outlets like yours and others, we’re going to be able to bring people the most important stories from a conservative angle every day.

Leahy: And one of the things I like about the way you’ve set this up, it’s a more modern, more colorful, but still very clean design at offthepress.com. Also, you have topic areas that move based upon the storyline. So, for instance, you just put up Madness in Minneapolis.

You got four or five stories there. Then another, historic border crisis. Here’s one I love: Garland Threatens Abbot. That headline describes exactly the problems going on in the country. We’ve got 30 seconds, Joseph. You want to wrap up?

Curl: Well, yeah, that’s exactly right. And that’s something that you wouldn’t see anymore on the Drudge Report. I remember when we were talking about creating this, Biden was in Europe, and he was just blundering his way across Europe. And every day there were five or six stories where it was just like, what a debacle.

And Drudge didn’t have any of them. So when we came online, we were like, look, we’re going to have an awful lot of Biden stories. We’re going to take a hard look at this administration that’s not really happening from any other perspective.

Leahy: Joseph Curl, founder and editor in chief of offthepress.com, the former Drudge protege, who’s now taking on his old boss and doing a great job. Joseph Curl, thanks for joining us. Come back again, please.

Curl: Thanks, Michael. Appreciate it.