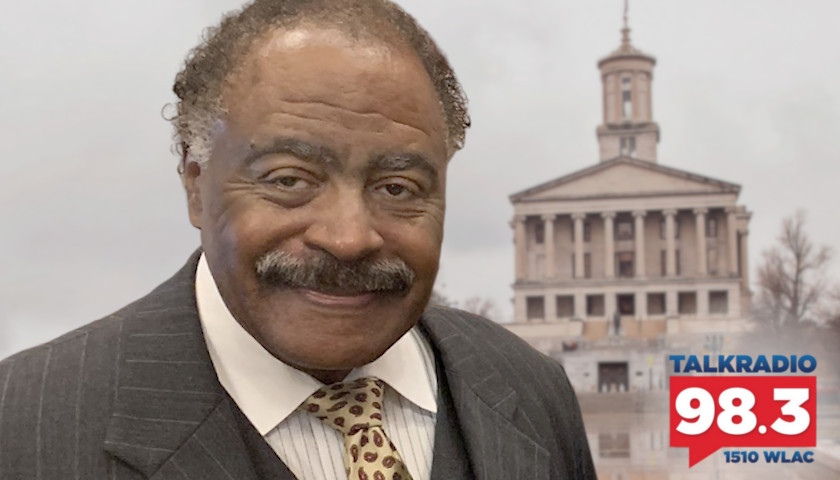 Leahy: We are joined now by our good friend, former state Representative John DeBerry who is currently serving as a senior adviser to Governor Bill Lee. Good morning Mr. DeBerry!

DeBerry: Good morning, sir. How are you doing?

Leahy: I am great. Hey, I have a question for you. You are still a preacher at Coleman Avenue Church of Christ in Memphis is that correct?

Leahy: I’ve got to come down and listen to your sermon sometime. Our family’s Church of Christ. I converted to it. My wife was a Church of Christ, and I saw the light and converted before we got married. But how big is your congregation down there?

DeBerry: Well, we are a small congregation. We are usually somewhere between 225. But now, since COVID we have maybe about 150 who are in the building and then many others who are still online.

Leahy: Are you seeing the beginning of an uptick in in-person attendance on Sunday services?

DeBerry: Oh, yeah. It gets better a little bit each Sunday. We have a building that’s large enough to separate everybody and folks feel comfortable. And I think that there has been fatigue over COVID for the last year. And I think the people are ready to get back in person and to be around each other again. And I’m looking forward to becoming more and more increased each week.

Leahy: What time are your services down there?

DeBerry: I would love to have you and you can say something to the congregation while you’re there.

Leahy: I’ll just say hello and the preacher is a great guy. (DeBerry chuckles) That’s what I’ll say. So you have served in the State House from 1995 until just this recent election. And you are now a senior adviser to Governor Bill. Tell us what that’s like.

Being an advisor and on the governor’s cabinet and staff, we are working with the governor’s agenda. The things the governor wants to accomplish. The bills he wants to get passed. The laws that he wants to either strengthen or having enacted. And you’re basically working to support the legislative agenda and to help take care of all the people of the state of Tennessee. And it’s very different, but it’s also very rewarding.

Leahy: Do you like this job as a senior advisor? And is it easier or harder than your job as a state representative?

Leahy: What are the big surprises that you found issues in your new job as a senior adviser to Governor Lee?

Leahy: Who’s easier to deal with? The Biden administration, the county mayors, or the county superintendents?

DeBerry: Well, I think the local people are always easier to deal with because they’re very specific in what they need. They’re very sincere about what they are asking the state to do. And usually most of the people of the state of Tennessee we are a very proud people. And folks that work hard. They volunteer, which is what our motto is.

And I think that when the people of the state, the mayors, the superintendents, and the county legislators when they ask for something, it’s because they really need it. And most of them are willing to work with the state government and work with the governor. The Washington agenda is totally different. And especially now with a different administration, it’s not the same place that it’s ever been. The country is is changing. The administration has changed. And I think that there are challenges in dealing with Washington right now.

Leahy: Can you give us an example of dealing with a Biden administration and any issue? Just pick any one that’s gone well, poorly, or could be improved.

DeBerry: Well, I think that right now education is a big issue. There’s a tremendous amount of money that’s coming from Washington as far as education is concerned. But we also have issues when you start looking at this, you have to look at the population of our school. We have more immigrants that are coming in. There are challenges with many of the immigrants that are coming in. You have undocumented minors who are coming in and that’s going to put a tremendous strain upon our school systems.

So I think that the education issue is one that is going to be challenging. But right now, with a new administration, you really can’t tell how they’re going to go on something. So it’s still a learning experience in dealing with the Biden administration as to how they’re going to conduct themselves on various issues now that they are there. They’re new so we are kind of standing by to see what happens on a lot of issues.

Leahy: So when you call somebody in the Biden administration at whatever level they are, do they return your calls? Are they nice or do they like you have to chase them?

DeBerry: Well, we have our COO, Brandon Gibson. We have Blake, who is the governor’s chief of staff. Lang Wiseman, who is the deputy governor, and the governor’s legal individual. They will contact Washington on a constant basis. And I think that right now because they are new because the people that they’re dealing with that had dealt with the Trump administration for four years there were relationships that had been built. There was trust that had been built.

There was comraderie. You knew who you were talking to. You had already dealt with many issues with these people. But now that there are new individuals in all of the various cabinet positions and the various secretary positions, I think that right now what’s happening is just basically building relationships and learning the rules of engagement from that particular administration right now.

Leahy: Now that’s spoken like a very kind person who’s giving the benefit of the doubt to the federal administration. (DeBerry chuckles) You’re laughing. You know what I’m talking about, aren’t you? (Laughter)

DeBerry: I know what you are talking about.

Leahy: Mr. DeBerry, what do you think is going to be the biggest issue that you’re going to be dealing with over the next several months?

And I think until we get the state of Tennessee open for business, Nashville and Memphis and Knoxville and Johnson City and Jackson and all of these various places, until we can get people confident to come out of their homes to work in their businesses, we’ve got to get people minds away from waiting on a stimulus check to getting back in line and becoming gainfully employed. We’re having a hard time finding people who want to work right now.